How different gene segment for different antibody chains are arranged.

Antigen specific antibody is produced by each type of B lymphocyte cells. It is believed that human genome contains only around 15000 to 20000 genes, than how the diversity for different antibody gene segment is originated? Some of the proposed mechanism for antibody diversity are described here:

Different types of VH and VL chain regions are generated during the maturation of B cells. Here different combination of V-(D)-J and V-J polypeptide chains along with C region are arranged differently to form different gene segments. The process is called as site specific recombination. 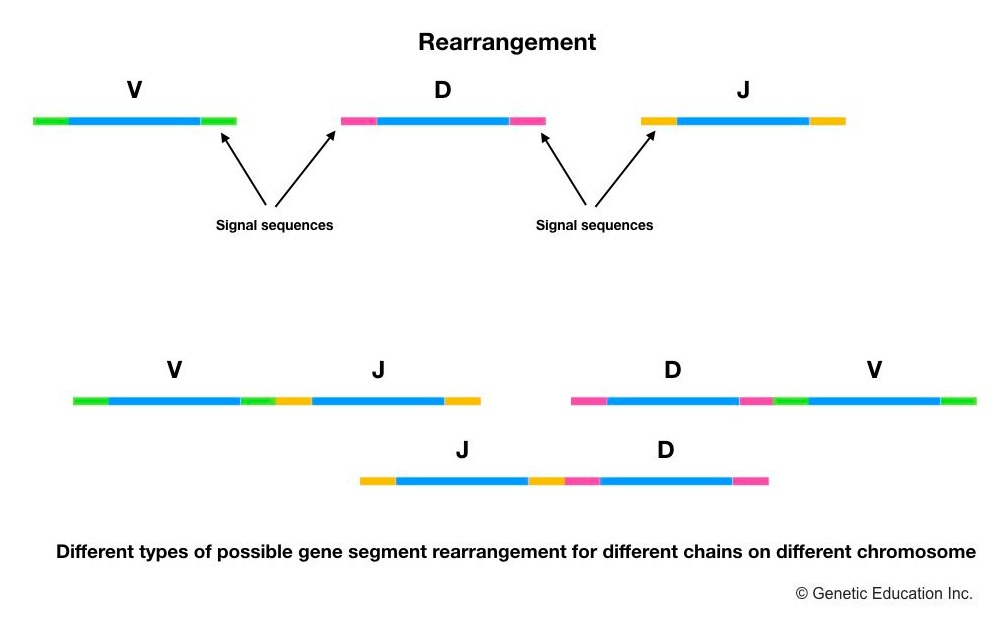 Random nucleotides are added or deleted from the gene segments which provides diversity to antibody and are called as junctional diversification.

Remember, without the spacer sequences on both the segments, recombinated segments can never be joined.

After the completion of recombination, the newly created segment is joined with constant region, and under go transcription. The mature mRNA forms the specific type of antibody polypeptides for specific antigen.

Considering the environmental effects and other adverse conditions, pathogens are continuously alters their genetic composition to survive. For providing protection agains newly emerged pathogenic strains, SHM (somatic hypermutation) allows rapid changes in our genome with higher rate of mutation, and it creates new genetic combination for antibody coding genes which protect us against new strains of pathogen.

But in contrast, joining of gene segment is not regulated, if it is matches with any other gene signal sequence, it will recombined. This phenomenon which gives additional flexibility to each segment are called as junctional flexibility.

During the proofreading, sometime terminal deoxynucleotidyl transferase adds some additional nucleotide to repair the DNA segments are called as N- nucleotide addition.

Mutations accumulated in antibody coding genes at the higher rate of 106 fold than normal mutation. The process is aimed to produce high affinity antibodies which is exactly matches the antigen.

Somatic hypermutation occurs in V region, J region or H region but SHM in CDR region (complementary determining region ) have higher affinity to antigen (antigen firstly presents at CDR region of antibody). Though SHM can produces antigen specific antibodies, some low affinity and non functional antibodies are also formed because the process of somatic hypermutation is random, it causes mutation or point mutation randomly on any of the gene sequences.

SHM is the key mechanism in antibody diversity generation. But still, it is not understood deeply. If SHM is not occurred, the genetic diversity for antibody coding gene sequences are fixed because diversity which are generated though rearrangement and recombination, are fixed within the genome. It means the available diversity is limited by birth. 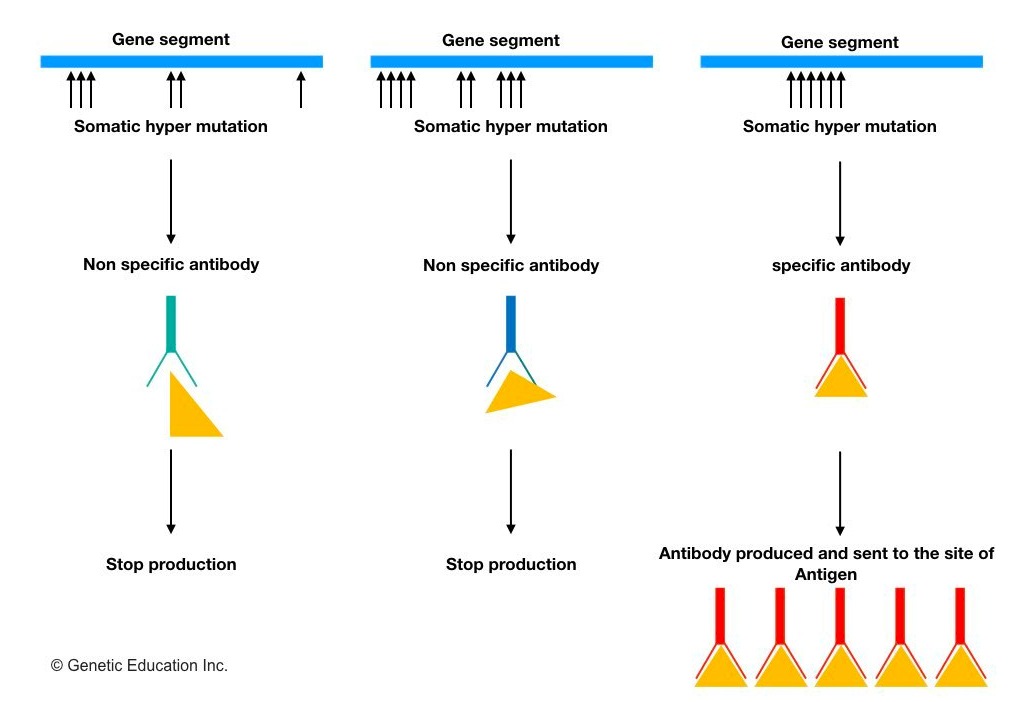 Image explanation: somatic hyper mutation occures in antibody gene segments as shown into figure, the arrows are different types of somatichyper mutations. The gene segment which has higher binding affinity is selected.

Considering the environmental effects and other adverse conditions, pathogens are continuously alters their genetic composition to survive. For providing protection agains newly emerged pathogenic strains, SHM allows rapid changes in our genome with higher rate of mutation, and it creates new genetic combination for antibody coding genes which protect us against new strains of pathogen.

When antigen binds to the antibody on the surface of B cell, it causes  B Lymphocyte cell to divide. Produce clones of that antigen-specific antibody producing B cells and select that cells to produce antibody. This mechanism is called as clonal selection. 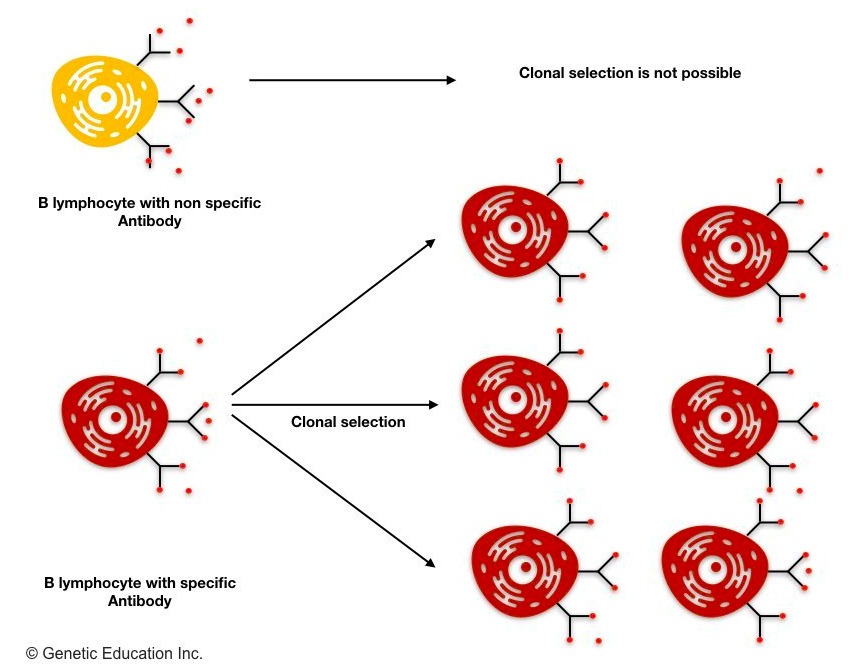 Every time when a new antigen is comes in contact with membrane embedded antibodies (remember IgD and IgM), SHM helps in creation of new type of antibody gene segment ant that antibody is sythesized by a population of same type of B lymphocytes by clonal selection.

Somatic cell is diploid. It contains two copy for one particular gene. Firstly lets recall the diploid theory, for any type of somatic mutation one allele become dominant and other remain recessive.

If the progeny carries dominant allele it become affected otherwise it turn into carrier or normal due to the recessive allele. Is it possible for antibody gene segment to produce two different types of gene segments? 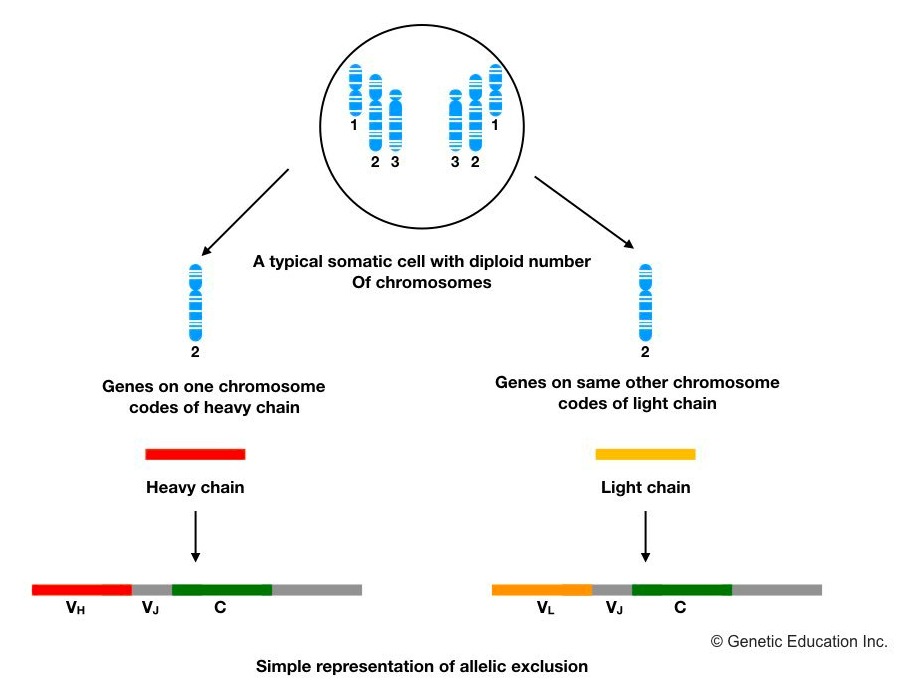 Image explanation: As shown in figure a one pair of chromosomal gene segment codes for two different type of chains (heavy chain and light chain) instead of providing additional diversity by allelic variation.

This is the reason why a single B lymphocyte cannot produce two different type of antibody gene segments.

Immunogenetics is still under expansion because we do not have enough data for each of the mechanism. Even we do not have much knowledge about gene segment rearrangement, recombination of gene segments and hypermutation. But antibody diversity has one of the pivotal role in our survival.

Keep in mind, every time when you are attacked by unknown antigen, possibly second time your immune system can protect you from that particular antigen.