“The repetitive DNA found at chromosome’s ends, function to protect the DNA or genes is known as telomere or telomeres of chromosomes.”

Do the telomeres of the human chromosomes have any role in ageing? the answer is “Yes”. In the present article, we will try to describe how it happens.

The DNA of us is situated on chromosomes- a complex network of protein and nucleic acid. The number of chromosomes varies between different organisms. For examples, 23 pairs of chromosomes are present in human.

All nuclear DNA of humans is located on those 46 chromosomes. Also, inherited it to consecutive generations.

Centromere, telomere and arms are three different structure of chromosomes. The centromere is located in the centre. The arms contain all genes and the telomeres are located on the ends of each chromosome.

Interestingly, if the number of chromosome changes, it can cause serious health issue, likewise the structural abnormalities.

In the present article, we will talk about telomeres and its role for us. Furthermore, we will discuss its purpose in ageing and cancer. The content of the article is,

What is a telomere?

In 1939, Muller and McClintock concluded that some specific sequences present at the end of the chromosome prevent chromosome fusion. Those are telomeric sequences.

As we said, the human chromosome is a complex network of proteins and DNA. Histon proteins like H1, H2A, H2B, H3 and H4 interacts with DNA and arrange it like bead-on-string structure.

Genes are located on the arms of chromosomes. And inherited with it. The telomeres protect genes from damage.

In 1983, McClintock B who discovered the transposons had explained the role of telomere end in chromosome stability.

However, the end replication problem was postulated by Olovnikov A during ‘70.

The enzyme telomerase was discovered and characterised in 2009.

The repetitive DNA found at chromosome’s ends, function to protect the DNA is known as telomere or telomeres of chromosomes.

The terminal end of the Hexa-repeat has single-stranded Guanine reach overhang. The six nucleotide sequence present from 2500 to 3000 time on each human chromosome. Notably, it is 15,000 nucleotides long.

The special Kind of TIP (Telomeric interacting proteins) and the Hexa nucleotide repeats of the telomeres provide the structural hierarchy to the telomere.

The 6 basepair repeats are tandem repeats and are conserved since the evolution.

Conclusively the characteristics of the telomere are,

The DNA is made up of the long chain of A, T, G and C bases, phosphate backbone and the sugar. Read more on the structure of DNA….click here

Notably, the telomeres are only present in eukaryotes. As the prokaryotic chromosomes are circular, it doesn’t have telomeres.

The prime function of it is to protect the genetic information of cells.

In addition to this, by capping the ends of chromosomes, it helps chromosomes to fit inside the cell nucleus.

It protects the fusion and deterioration of chromosomes.

It prevents cancer and induces senescence.

What is the end replication problem?

If genes or coding sequences are located on the ends, It can’t replicate properly. And results in genetic problems.

As we said above, the telomeric sequences are non-coding. Some sequences lose after each round of replications. But it doesn’t cost anything to a cell (because it is just junk!).

But in the end, the RNA primer is removed and the gap above it remains as well. A similar problem happens at the lagging strand too.

The primer of the last Okazaki fragment can’t be made unlike other fragments and hence remains unreplicated.  The last RNA primer can not form DNA because no DNA strand is left there. Ultimately, the RNA primer is removed or destroyed and the gap remains unfilled.

Thus after each round of replication, some amount of DNA from the end losses because the single-stranded overhang can’t copy.

Now assume that, if some of the important genes may present at the end of the chromosomes, those genes will skip replication and can’t be inherited.

The activity of DNA polymerase decreases at the end of the replication. Therefore some amount of DNA can’t be properly copied. Consequently, those sequences are lost or removed. 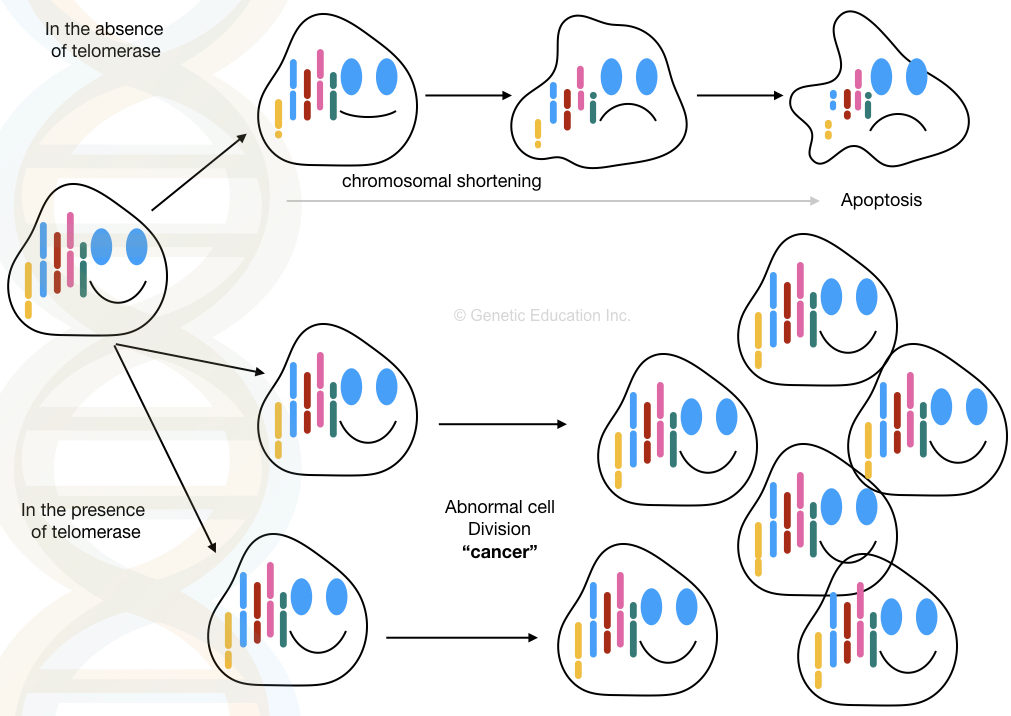 The process of losing DNA sequences from telomere is referred to as telomere shortening. Scientists believe that it causes cell ageing. After each round of replication, some DNA removed and the cell becomes aged.

Actually, this end replication problem is a reason for eukaryotic mortality. However, Our cell can solve this problem using a special type of enzyme.

All our genetic content must remain intact and unbroken.

The DNA repair pathway of our cell repairs the DNA (which are broken or single-stranded), to prevent the loss of the DNA.

If this DNA repair pathway repairs the DNA of the end of the chromosomes (overhang telomere). The ageing can’t happen.

To skip the DNA repair, the single-stranded overhang forms a loop and becomes double-stranded by creating hydrogen bonds with the adjacent DNA.

The cell senescence occurred due to the progressive telomere shorting. “Senescence is a process of loss of a cells growth and division power”.

The telomere shortening is very common in somatic cells but not in germ cells!

In germ cells like eggs and sperm, telomere losing prevented. Further, it is can not occur in some pluripotent stem cells as well.

After each round of replication, telomeres shorten. However, at one critical point, it can’t shorten more, the point is senescence. Here the cell dies and can’t go further cell division. Thus a cell can divide only 50 to 55 times, the limit is known as the “Hayflick limit.”

Telomere prevents unnecessary recombination, DNA repair and degradation. Therefore telomere has a crucial role in preserving information in our genome. Ultimately it determines the lifespan of the cell and organism. It is a kind of biological clock.

Besides the length of our hero (i am talking about “telo”), the shape and structure of it, is also very crucial for normal cell functioning.

The sequences in it are TTAGGG in humans and it’s fixed not changed. Further, The ends formed by the telomeres are not blunt. Actually, it forms a loop by bending and becomes double-stranded.

That’s how it gives an exact shape to ends. Telomere shortening is one of the reasons why we aged.

Progressive reduction in the function of the cell or tissue causes mortality; is called as an ageing process.

As we age, the functional capability of the cell decreases gradually. The ability of a cell to produce energy, the rate of synthesis of new biomolecules and the rate of replication decreases as well.

“Shorter the telomere, shorter the lifespan of an organism”

As the ageing of an organism depends on the length of the telomere. This means organisms with longer telomeres lives longer (for example human) as compared with short telomere (for example dog and mice).

Nonetheless, telomere shortening is not the only reason for the ageing. So is it possible to increase lifespan by decreasing the rate of telomere shorting?

Well, theoretically, telomerase enzyme can do so. If we increase the expression of the telomerase gene in somatic tissues, we can live longer. Just an assumption!

Practically, it is not possible. Yet, telomerase therapy can do so. However, it can also cause unknown cancer. Or we don’t know what else will happen.

As we know, only telomerase enzyme can prevent telo-shortening, thankfully it is not present in somatic cells.

As we discussed, the abnormal activity of telomerase causes cancer. It also plays a role in preventing cancer as well. I will tell you how!

Too short telomeres can’t copy. Thus, it sends a signal to a cell to repair the DNA. A quickly shortened telomeres treated as broken DNA and get repaired.

Hence, the normal function and activity of cell and cell division are revived. By this mechanism, the chance of cancer decreases. 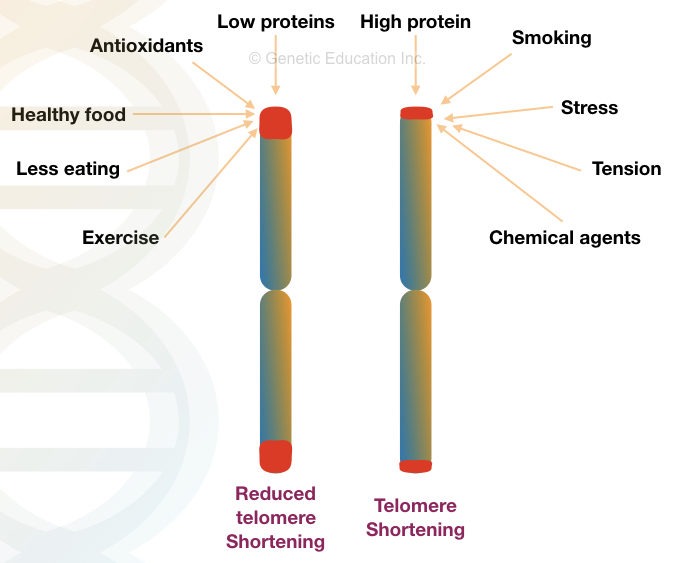 The telomere shortening must be prevented in germ cells by telomerase enzyme.

In humans, two identical telomerase enzymes are required for the proper function of the telomere. Therefore it is also called as a dimeric enzyme.

The short- single-stranded RNA is used as a template for the synthesis of new DNA by reverse transcription activity.

Telomerase is a class of special kind of ribonucleoprotein enzyme that prevents the telomere shortening.

TERC- telomerase RNA component serves as a template for the activity of the telomerase enzyme.

However, the expression of the TERT gene is highly regulated in stem cells and germ cells.

Overall, the telomerase prevents the telomere shorting by adding nucleotides complementary to the overhang.

Telomerase activity can lose due to mutations in TERC or TERT. This will result in either uncontrolled telomere growth or telomere shortening.

The telomerase activity depends on the shelterin or telosome. The sheltering is a complex of six telomere maintenance protein composed of TRF1 and TRF2.

Moreover, other shelterin proteins are RAP1, POT1, TIN2 and TPP1 help in telomere maintenance and regulation.

Now, imagine if telomerase is inactive in germ cells such as sperm or egg, what will happen?

We will answer this question in the last part of this article.

As we said above, the hexanucleotide chain is also associated with cancer.

We are talking about the hexanucleotide chain- AATGGG- the telomere.

So the telomere shortening has a definite role in cancer. In general, a normal cell can divide only 50 to 75 times. After that the cell undergoes apoptosis.

“Apoptosis is a process of cell death.”

In cancer, the dysregulation of  p53 and the p16 cell signalling pathway leads to senescence. Results in infinite cell division.

I mean, the coding DNA sequence which is another reason for cancer. However, this mechanism is less understood.

Intrinsic factors such as epigenetics, genetic makeup and activity of DNA repair pathway also involved in the same.

Smoking can cause DNA damage and increases telomere shortening. Further, lack of physical activity and obesity causes the same.

Studies confirmed that less consumption of dietary intact can increase our age by reducing telomere shortening. 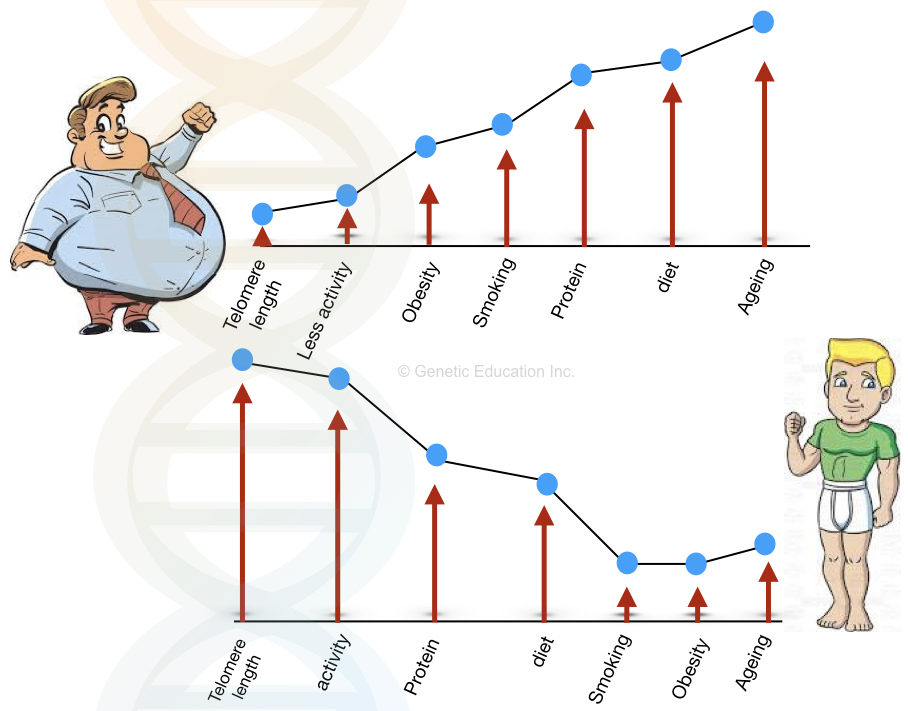 Also, some dietary intakes like omega 3 antioxidants reduce the ageing process. Restricted and controlled diet can increase our biological age.

Telomere has a significant role in almost 85% of cancer cases. Telomerase is more active in germ cells and pluripotent cells however the length of the telomere is more shorten in the cancer cells compared to normal cells.

Telomere and other disorders:

Telomerase therapy can be one of the anti-ageing options. Even, it can also be used in cancer. However, extensive research required to establish it. Telomere and ageing are co-related with each other. Telomere shortening is a major reason for ageing.

By taking less, balanced and antioxidants rich food, we can increase our biological age.

Now answer to our question: if telomerase is inactive in germ cells such as sperm or egg, what will happen?

The answer is “we will extinct.”