“The BCR-ABL1 gene fusion occurred due to the translocation between chromosome 9 and 22 results in chronic myeloid leukemia, the truncated chromosome is called the Philadelphia chromosome.”

Chromosomal abnormalities can cause many types of disorders which are inherited as well as somatic (non-inherited).

Cancer is one of them, after the discovery of the Philadelphia chromosome, the role of chromosome alterations in oncogenic activation is cleared.

The chromosomal translocation is a type of genetic mutation in which one part or the portion or an entire arm of a chromosome deleted from one chromosome and attached to another chromosome.

Let’s come to the point,

In the year 1938, Karl Sax discovered the first chromosomal aberration using the X-rays method at the Harvard University biological lab.

In 1959, David Hungerford from the Fox chase cancer centre reported the translocation of the Philadelphia chromosome.

During his doctoral research work on the chromosome, he found this unusual chromosomal imbalance in the positive leukemia patients, first time.

In the same year, Peter Nowell involved in the leukemia research with David and discovered the pattern of Philadelphia chromosome translocation.

Later on, Janet Rowley at the University of Chicago proposed the molecular mechanism of Philadelphia chromosome translocation.

In the present article, we will discuss the molecular mechanism of BCR-ABL1 gene fusion and its role in acute myeloid leukemia.

“Due to the translocation between chromosome 9 and 22, BCR-ABL1 gene formation occurred at chromosome 22 consequence in activation of oncogene which leads to the acute myeloid leukaemia, called the Philadelphia chromosome or Ph chromosome.”

What is Philadelphia chromosome?

The Philadelphia chromosome often abbreviated as “Ph chromosome” is originated due to the exchange of genetic material between two chromosome during recombination.

Because of the exchange of genetic material between chromosome 9 and 22, some gene sequences from chromosome 9 migrates on chromosome 22 and vice verse, noticed usually in the chronic myeloid leukemia.

The CML caused by the BCR-ABL1 gene rearrangement is a type of somatic mutation which can not be inherited to the next generation.

The present translocation is reciprocal (exchange of genetic material between two non-homologous chromosomes) and cytologically written as t(9;22)(q32;q11).

The above indication is cytological which shows that,

Read our article on cytogenetics: A Brief Introduction To Cytogenetics [Karyotyping, FISH and Microarray] 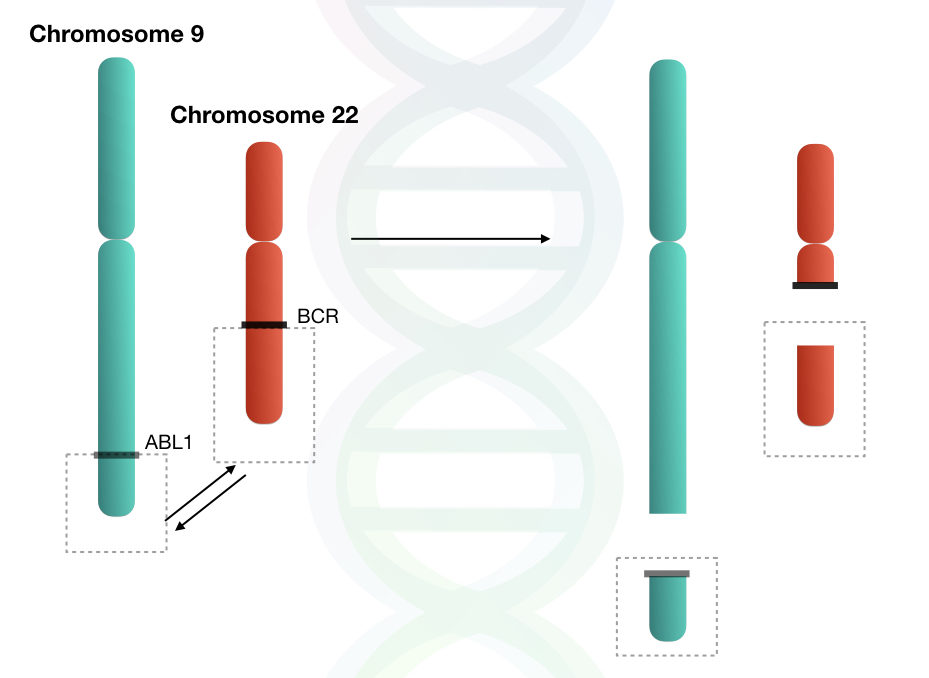 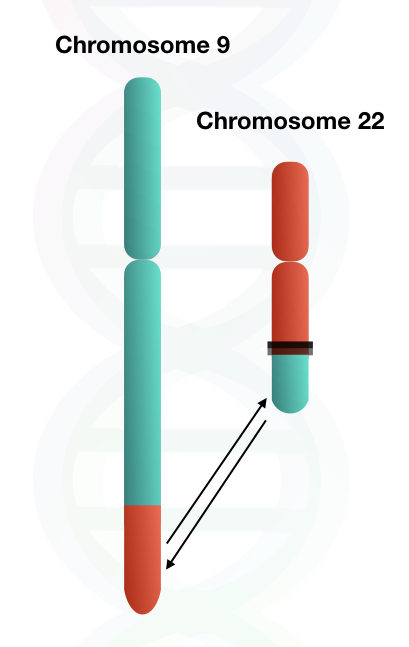 The occurrence of Ph chromosome also disrupts the genetic instability.

All the cases of chronic myeloid leukemia are cytologically positive for Ph chromosome, however, the abnormal translocation is not only observed in CML cases.

The Ph chromosome is also reported in some cases of  Acute Lymphoblastic Leukemia (25-30%) and mixed-phenotype acute leukaemia.

What is BCR-ABL1 gene fusion?

The reciprocal translocation between chromosome 9 and 22 results in the fusion of two genes viz BCR and ABL1.

The BCR gene is located on chromosome 22 at the location ~22q11.

During the translocation of genetic material, the ABL1 gene segment translocates to the q arm of the chromosome 22 near the BCR gene which results in the fusion of the BCR-ABL1 gene.

When fusion between two gene segment occurred, the fusion of BCL results in upregulation of the ABL1 gene (converts proto-oncogene into oncogene).

The uncontrolled expression of oncogene results in the activation of tyrosine kinase protein.

The altered function protein tyrosine kinase encodes by the fusion gene BCR-ABL1 oncogene having the molecular weight of 185 to 210kDa.

Some other forms of the fusion protein are also found in different leukemic conditions. See the table below,

140bp region of the ABL1 gene mainly involves exon 1b and 2a regions of the gene.

If introns 13 and 14 of the BCR gene involved in the translocation, it is called a major breakpoint, M-BCR. 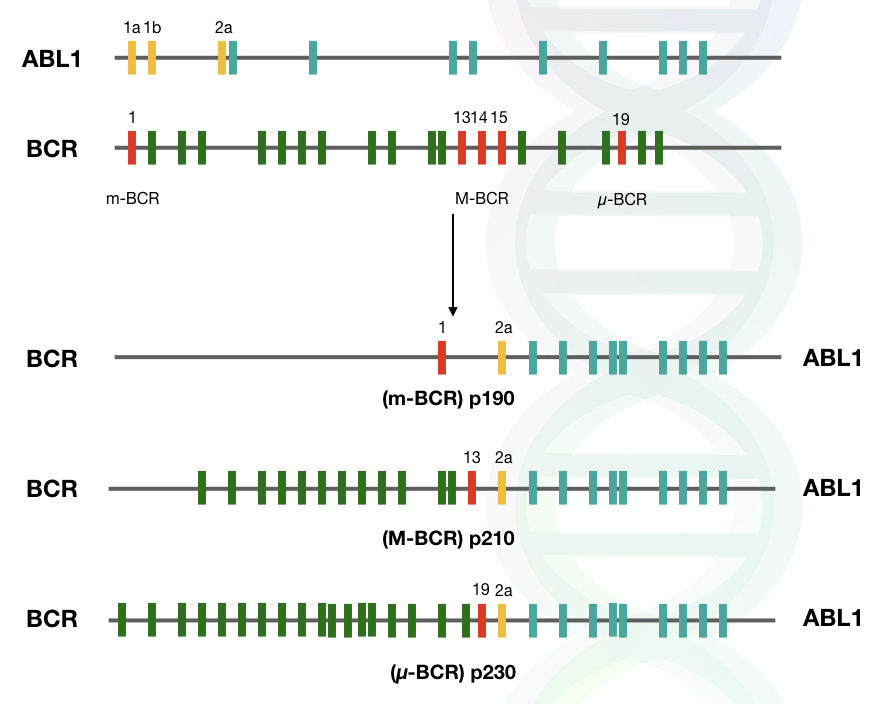 While Ser/Thr kinase domain and Rho/GEF domain of the BCR gene get involved in the formation of the duplex.

The N-terminal CC domain and Y177 domain of the BCR gene are essential for the activation of the kinase activity after the fusion. And this will leads to the overactivity of mutant kinase result in uncontrolled cell division.

In addition to their direct role in the activation of an oncogene, the BCR-ABL1 fusion gene segment also affects some other signalling pathways which are required in the cell proliferation, cell signalling and apoptosis.

Some of the affected pathways are:

Functionally the BCR gene is involved in the guanine nucleotide exchange factor for Pho family GTPase.

The ABL1 gene fusion occurred at the N-terminus end of the BCR gene results in oncogenic activity.

Although the BCR protein functions as a GTPase activator and kinase, the exact function of the protein encoded by the BCR gene is still fully unknown.

The tyrosine kinase protein is located in the cytoplasm as well as in the nucleus of a cell having involved in the cell division, cell differentiation and cell adhesion.

Furthermore, it has a major role in stress response too.

Once the ABL1 gene translocates to chromosome 22, the deletion of the SH3 domain of the protein turns the ABL1 proto-oncogene into the oncogene.

After the fusion of two genes the uncontrolled activity of tyrosine kinase protein results in uncontrolled cell division.

The ABL1 is also involved in cell proliferation and apoptosis. The kinase protein also interacts with some of the other proteins, involved in the making of the structural framework of a cell.

The cancer is a process of uncontrolled cell growth or division which results in the accumulation of a specific type of mutant cell in the body.

In simple words, we can say the leukemia is a blood cancer especially affects the white blood cells of ours which divides infinitely and accumulates in the blood.

The white blood cells fight against the foreign pathogens and antigens that harm our body but in leukemia the bone marrow produces an abnormal form of WBC which are unable to protect our body against the foe.

The reciprocal translocation of chromosomal segments between 9 and 22 consequence in leukemia like cancerous condition called acute myeloid leukemia.

The rapidly dividing abnormal lymphocytes which form the lymphatic tissues results in the ALL.

The ALL conditions are commonly observed in younger children.

The rapidly dividing nonfunction myeloid cells results in AML. The myeloid cells are the major source for the origin of RBC, WBC and platelets. 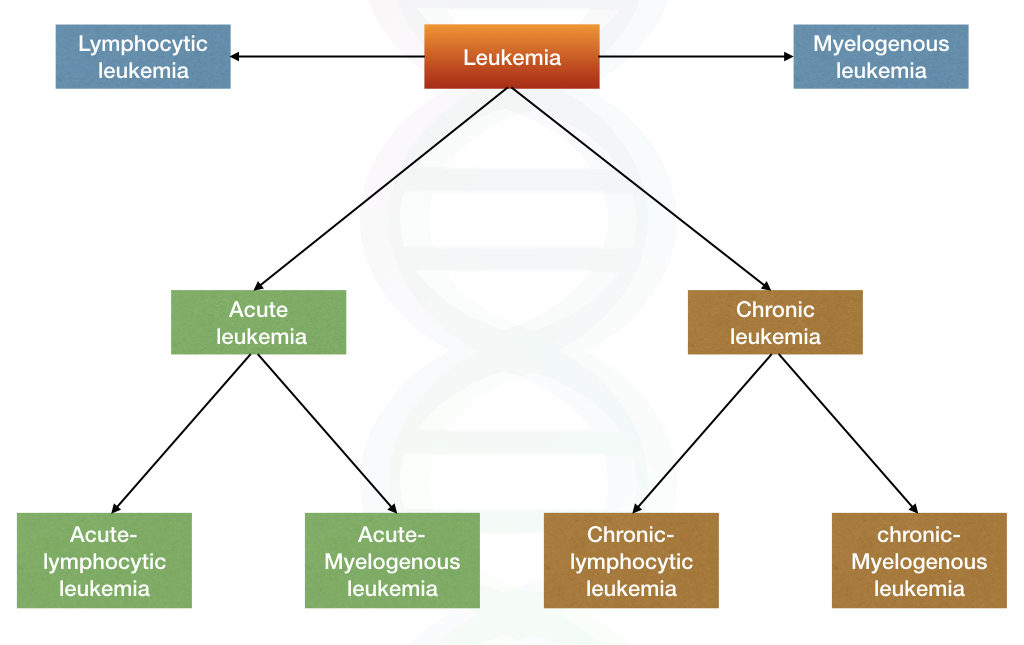 The slower progression of functionally abnormal myeloid cells results in CML. It mainly affects adults, however, the symptoms of the disease can not be seen for months or year due to the slow progression of cancer.

If detected in the early phase, cancer can be cured.

In the CML the bone marrow produces a large number of immature WBC in an uncontrolled manner. The immature white blood cells are called myeloblasts or commonly the “blasts” which affects the function of other blood cells.

Now the two figure is given below.

The first figure shows the karyotype of a normal individual with 46 chromosomes and without the translocation, see the green arrows, 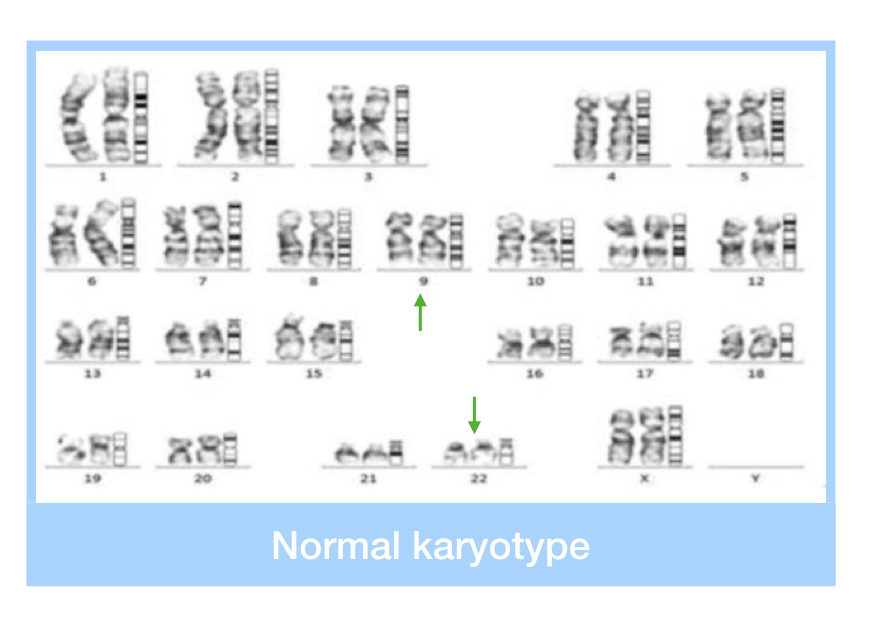 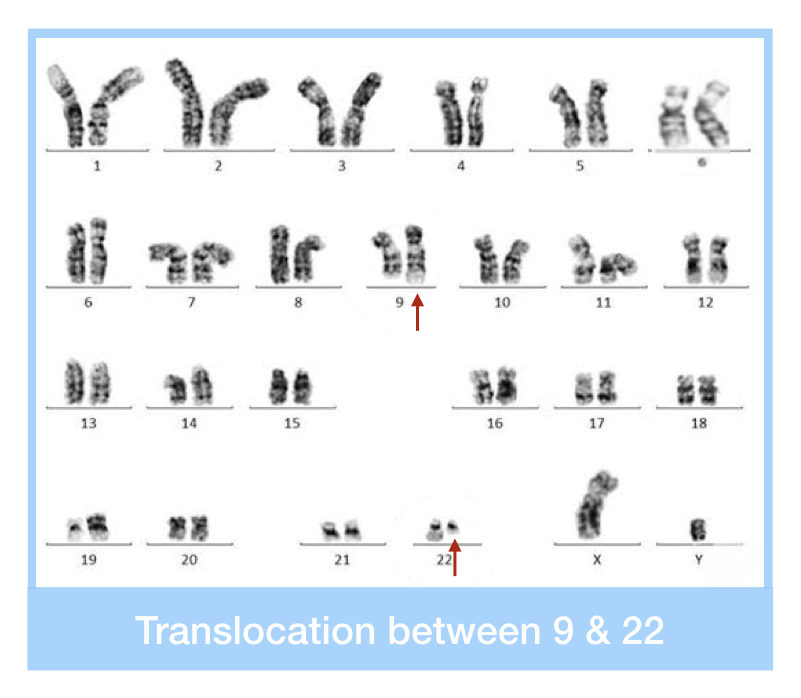 Read our protocol for karyotyping: A Karyotyping Protocol For Peripheral Blood Lymphocyte Culture

The tyrosine kinase inhibitor therapy is one of the most successful therapies for CML which disrupts the activity of BCR-ABL1 gene segments and deactivates the kinase.

However, the success rate of tyrosine kinase therapy is too low.

Cytogenetic techniques like Giemsa banding is used for the indication of Ph chromosome [cytological indication: t(9;22)(q32;q11)], however, high-resolution banding techniques and fluorescent in situ hybridization like techniques are used for further investigative and conformation.