“The DNA in prokaryotes are smaller in size, circular and present in cytoplasm while the eukaryotic DNA is larger in size, arranged on chromosomes and located in the nucleus of the cell.”

The prokaryotes are a single-cell organism does not have a nucleus, unlike the eukaryotes.

Contrary to this, the eukaryotes are a multi-cellular organism, made up of the tissues- a collection of the same type of cells.

The eukaryotic cell is more complex and contains membrane-bounded organelles such as a nucleus.

The DNA or RNA- a type of nucleic acid is genetic material in both prokaryotes and eukaryotes which helps a cell to perform different metabolic functions.

The nucleic acid present in eukaryotes are only DNA however, some prokaryotes such as retrovirus contains RNA as their genetic material.

Even though the DNA- deoxyribose nucleic acid is genetic material in both; prokaryotic DNA and eukaryotic DNA are different in many senses.

In the present article, we will discuss some of the common differences between prokaryotic DNA and eukaryotic DNA.

Related articles: Differences and similarities between DNA vs RNA.

While the entire genome of the eukaryotes are arranged on the different chromosome and are not circular. The eukaryotic chromosomes have centromere, telomere and two arms.

The genome of prokaryotes is too small contains a few genes and ranging from several kb to MB in size while the eukaryotic genome is larger contains a few thousand genes (~21,000 genes in human) and made up of billions of base pairs.

The circular chromosome of prokaryotes is present in the cytoplasm called nucleoid (not membrane-bounded),

Whereas the eukaryotic DNA is present in the membrane-bounded organelle- nucleus. The process of replication and transcription occurs in the nucleus of the eukaryotic cell.

Notably, some amount of free DNA is also present in the cytoplasm of the eukaryotic cell in the mitochondria or chloroplast. Although, those DNAs are not a part of a genome.

In addition to the circular chromosome, the prokaryotes also possess a single-stranded smaller circular DNA in the cytoplasm called plasmid DNA.

The plasmid DNA have some of the important genes such as antibiotic-resistance genes which are required for the survival of the prokaryotic cell.

In contrast to this, plasmid DNA is not present in eukaryotic cells.

(This is one of the important difference).

The prokaryotic chromosome is circular and hence does not fold with histone protein because it does not have to fit inside the nucleus.

On the other side, the eukaryotic chromosome is linear and it must be fitted in the nucleus of a cell thus it needs to organise properly.

It folds with the histone proteins and becomes compact which forms a chromosome and helps to fit in the nucleus.

The repeat sequences are categorised as microsatellites or minisatellites and are not involved in the formation of proteins.

Due to the smaller size of the prokaryotic genome, the major portion of it is active and involved in protein formation.

Approximately 97% of the human genome is made up of the non-coding DNA sequences which do not encode any protein.

However, the non-coding DNA is required for the regulation of gene expression.

The prokaryotes contain several hundred to a few thousand genes some of the examples are given below,

Prokaryotes are single-cell organism thus contains only a single copy of a genome whereas the eukaryotes consist of more than one copy of the genome.

The prokaryotic chromosome is circular and consequently contains only a single origin of replication while eukaryotic DNA contains multiple origins of replication sites.

Origin of replication often denoted as “Ori” is a site in a genome at which the replication initiated. 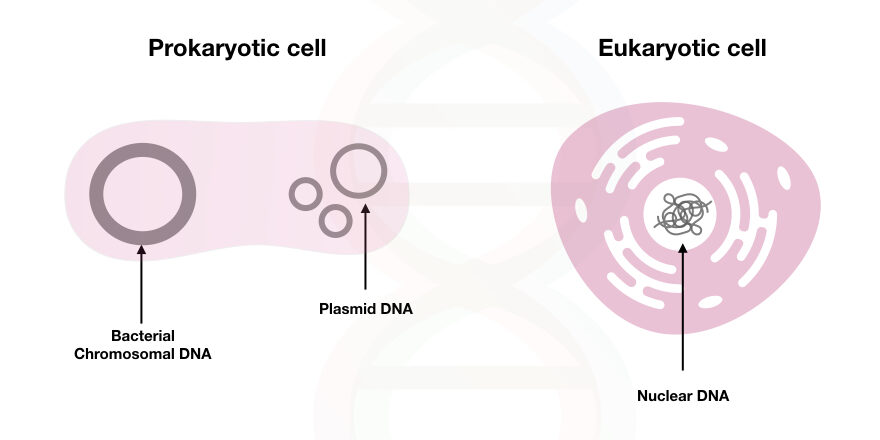 Transposons are the mobile genetic elements that jump from one place to another in the genome and induces genetic diversity.

The prokaryotes contain a higher amount of the “active transposons”, however, transposons are inactive since long in eukaryotes.

The DNA present in the prokaryotic cell does not have a higher-end organisation, can not interact with the histone proteins and therefore can not form nucleosomes.

On the other side, the histone and DNA interaction in the eukaryotic DNA helps them to arrange properly and maintaining gene expression.

Some of the similarities between prokaryotic and eukaryotic DNA are,

Both have extrachromosomal genetic material, plasmid DNA in prokaryotes and mtDNA and ctDNA in eukaryotes.

Plasmid DNA is one of the important tool used in the gene transfer, gene manipulation and genetic engineering experiments.

As the genome of the eukaryotes is larger, it is more complex and evolved very slowly.