The process of replication is not a complex one as like transcription and translation. Replication is an enzyme-dependent catalytic reaction which replicates DNA and sends it to the newly synthesized daughter cells.

It starts with the synthesis of single-stranded RNA primers with the help of primase. Once the process of primer settling done, the helicase starts unwinding the dsDNA. However, the ssDNA is thermodynamically unstable and it is more prone to nucleophilic attack that can damage the DNA.

Before that read the previous article of this series: 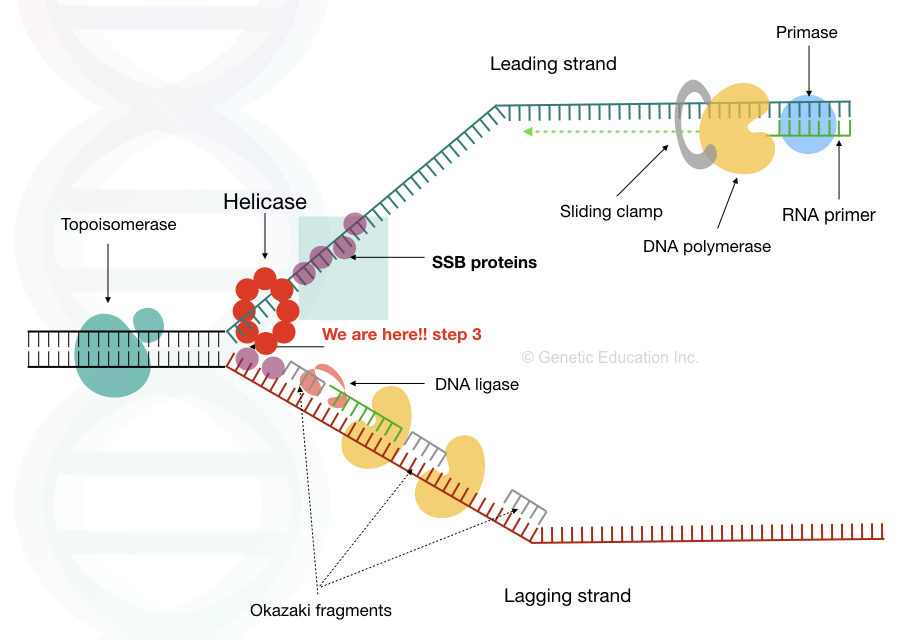 What is a single-stranded binding protein(SSB)?

The SSB protein is a class of DNA binding proteins that holds the single-stranded DNA to facilitate DNA replication. In bacteria, especially in the E.Coli, the SSB protein found as a tetramer with four different domains or structures.

All the subunits are identical and having a molecular weight of 19KDa.

However, the commercially available single-stranded binding proteins are of approximately ~18 to 18.9KDa in size.

There is at least one DNA binding oligonucleotide/oligosaccharide binding (OB) fold present in it. The OB-fold contains at least five stranded beta-sheet which is arranged as a beta-barrel and then capped by a single alpha helix.

The arrangement of OB-fold is different between bacteria, archaea, and eukaryotes.

ICP8, which is the SSB protein present during DNA replication of herpes simplex virus type-1 (HSV-1), is similar to human cytomegalovirus (HHV). It is one of the seven proteins encoded in the viral genome of HSV-1 for DNA replication.

It recombines to ssDNA and even melts dsDNA. During initial replication, it destabilizes dsDNA. Here, helicase and viral SSB protein are different because of the absence of ATP and Mg2+.

When any cells are infected by HSV-1, then the DNA becomes colocalized with ICP8.

The domains of SSB protein present in bacteria are essential for DNA metabolism. It consists of three beta-strands with a single six-stranded beta-sheet to form a dimer.

In Saccharomyces cerevisiae, mtSSB protein coordinates replication and maintenance of mtDNA. It is believed that RIM1 is exclusively responsible for ssDNA binding and can form homo-tetramers in solution.

Human mtSSB protein binds to single-stranded mtDNA as a tetramer. It has been noted that the sequence of human mitochondrial SSB is similar to Escherichia coli (EcSSB) SSB.

Interestingly, It is found that Mtp1/mtTBP, a Rim1 homolog in Candida parapsilosis which functions as a general SSB and as a sequence-specific SSB for the telomeric ends of its mitochondrial DNA, forms a significant fraction of dimmers in contrast to the stable formation of tetramers in solution.

Often called as replication protein A.

In recent studies, it has been found that replication protein present in the nucleus of eukaryotic cells is functionally similar to SSB protein but sequence homology is absent. As the name suggests, single-strand DNA binding (SSB) protein binds to single-stranded DNA.

SSBs are a type of nucleoproteins that are present in viruses, bacteria, and humans.

It is of utmost interest to know that the SSBs present in three branches of organisms and in viruses have the same sequences; biochemical and structural characteristics.

Now the question arises in mind that why SSB is required? Because the helicase already has done a work to unwind the DNA.

The answer is here,

The dsDNA structure is more stable than the ssDNA form. Three hydrogen bonds between guanine and cytosine and two hydrogen bond between the thymine and adenine make the duplex DNA more stable.

The SSB holds the ssDNA and prevents the rewinding of two ssDNA.

In addition to this,

When SSB protein bind to single-stranded DNA, the hardening of strands is prevented during DNA replication. It also protects from the nuclease or chemical digradation.  Interestingly, it removes unwanted secondary structures for easy access to other enzymes as well.

The SSB also helps in the binding of other proteins that are involved in DNA metabolism. Thus, SSB protein stabilizes the single-stranded DNA structures which are important for genomic progression.

In recent years, a variety of applications of SSB protein has been found in molecular biology and analytical methods which are detailed here.

Applications of SSB in molecular genetics:

The single-stranded binding protein is not only an in vivo separator but also it is used in some of the molecular genetic techniques such as PCR and DNA sequencing to enhance the reaction efficiency.

SSB is used in DNA replication and recombination in vivo. As discussed earlier, the SSB protein holds ssDNA by destabilizing helical duplexes. This property is used to visualize ssDNA by electron microscopy.

When SSB protein is used in PCR, the denatured DNA is stabilized and also protects the DNA from being digested by nuclease. Thus the genome can be protected.

It has been studied that SSB protein, gene 32 protein from bacteriophage T4 or SSB from Escherichia coli is used in PCR to increase amplification efficiency with diverse templates.

SSB may also stimulate specific DNA polymerases used in DNA sequencing reactions and has been used to target restriction endonuclease digestions to specific sites in single-stranded DNA for subsequent mutagenesis.

SSB has been shown to be effective in fluorescence polarization assays and eliminates pausing when sequencing through the strong secondary structure. More recently, SSB was used to help obtain longer read lengths in pyrosequencing for SNP analysis.

When SSB is combined with RecA protein, sequences from libraries of double-stranded DNA can be used to carry out site-directed mutagenesis.

Using surface plasma resonance imaging, the affinity of SSB towards ssDNA is utilized for the detection of hybridization on the gold surface.

Apart from these, the SSB protein also functions as

The single-stranded binding protein is very necessary for the DNA polymerase to do the synthesis, if it is not there, the progression of DNA synthesis can be interrupted. Furthermore, 5 µg/µL SSB is required to enhance the amplification efficiency in PCR.