The helicase is a class of the enzyme, especially, the DNA helicase that unwinds the dsDNA and facilitates DNA replication.

Assume that, the RNA primer is ready for starting the replication, now a single-stranded DNA is needed for primer binding.

Now we are here, 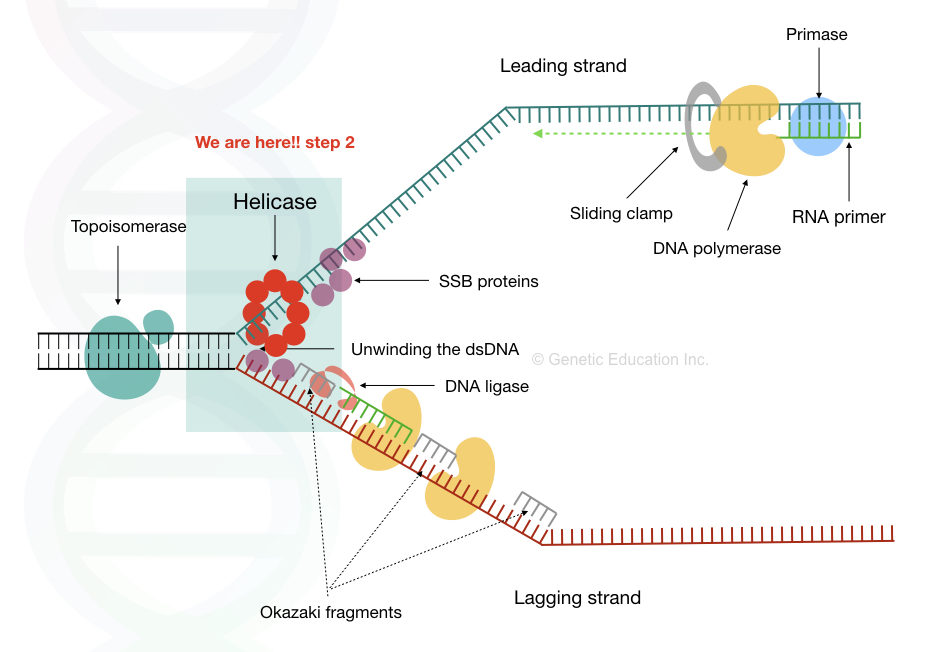 In the present article, we will discuss the structure and function of helicase and how different helicases are involved in the maintenance of the genome.

The helicase was first identified in E.coli in the year 1976. However, the first eukaryotic DNA helicase was discovered in 1978.

The list of the helicases present in different organisms are given into the table below,

“Helicase is a class of motor protein that unwinds nucleic acids using the energy molecules. “

~1% of the human genome encodes genes for various helicases, 31 DNA helicases and 64 RNA helicases are encoded by those genes.

DNA helicase as well as the RNA helicases involved in the various functions such as replication, transcription, translation, DNA repair and DNA recombination.

The helicase is universally present in all living organisms starting from prokaryotic bacteria to higher eukaryotes.

Broadly, it is classified into two categories: DNA helicases and RNA helicases.

DNA helicase is an ATP dependent catalytic enzyme which unwinds the dsDNA for providing leading as well as lagging strand replication.

It runs ahead of the replication fork and continuously unwinds the dsDNA, providing the template for DNA polymerase to work.

Unless DNA  helicase unwinds dsDNA, DNA polymerase can not able to add nucleotide.

The DNA helicase rotates at a speed of jet engine turbine with 10,000 rotation per minute to open the DNA strands.

A large number of helicases are found in nature, their structure thus might vary from species to species. Some helicases are hexameric, some are monomeric or dimeric. Although, all the helicases possess some conserved sequence motifs in its activation site or core.

These motifs are involved in ATP-binding, activation, hydrolysis and breakage of hydrogen bonds.

Several common motifs among different organism are enlisted below, 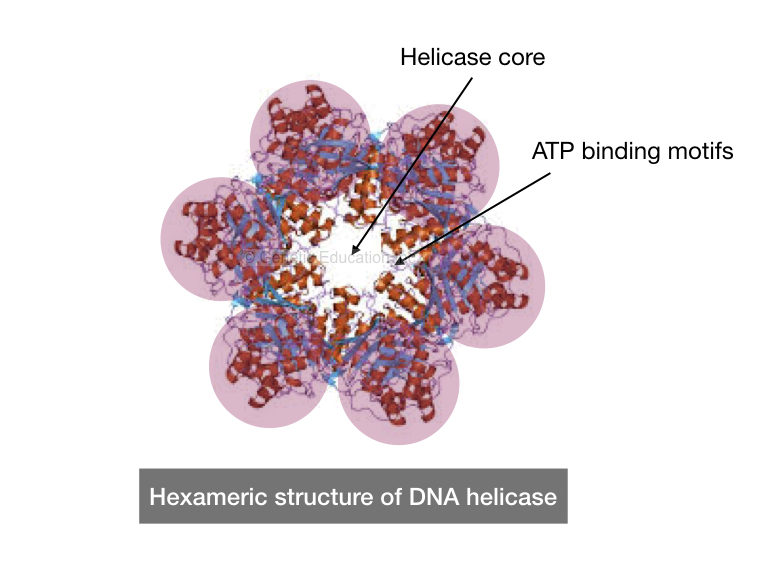 The hexameric DNA helicase is a ring-shaped structure having six different subunits.

A special catalytic and nucleotide-binding site called AAA+ is involved in the unwinding of dsDNA.

The molecular weight of a DNA helicase is 300kDa.

Interesting article: DNA story: The structure and function of DNA

The catalytic activity of DNA helicase starts with recognising the dsDNA strand. Interestingly, DNA helicase required a short stretch of the ssDNA for performing the unwinding during in vitro experiments.

Nonetheless, how the helicase starts unwinding the dsDNA, in vivo (during replication) is still not known.

In simple words, we can say that the helicase is a kind of rotating engine that move forward to perform its activity.

Helicase moves forward at the rate of one nucleotide per hydrolysis reaction.

Different motif present in the core of the enzyme helps in processing the ATP.

The ATP converts into ADP and releases the energy which is utilized to activate the jet engine of helicase.

The human hexameric helicase has a central holo part in which the DNA binding motif is present.

Once the DNA entred into the holo part, the motifs Walker A and Walker B starts hydrolysis of ATP and release energy to break the hydrogen bond.

Once it starts spinning, it breaks the hydrogen bonds and moves forward, again, for another set of reaction, it utilizes another ATP.

During this process, the helicase binds to one of the two dsDNA strands and passes it from its hollow core.

Unwinding the double-stranded nucleic acid (DNA/RNA) is a major function of any helicase subclass enzyme.

In DNA replication, the helicase works by creating a complex with other proteins such as DNA primase, polymerase or single stranded-binding proteins.

during replication, the helicase unwinds the dsDNA as we discussed above. Apart from this, several other functions are also performed by the helicase which is enlisted below,

During DNA repair, the helicase unwinds or opens the dsDNA for repairing damaged DNA strands.

During the translation, it breaks the hydrogen bonds between the DNA-RNA hybrid.

Further to this, the helicase also helps in splicing, chromatin remodelling, termination of translation.

Functions performed by the RNA helicase in RNA biogenesis are:

Furthermore, the helicase provides the strand migration or exchange of genetic material during the process of recombination.

Interestingly, scientists have found that the helicase is also involved in the telomerase maintenance and ageing process.

Several helicases and their function are given into the table below,

Several helicases play an important role in the DNA translation too are:

Apart from its role in DNA maintenance, the mutation in the helicase coding gene also results in some genetic anomalies.

ATRX helicase mutation, XPD point mutation and RecQ mutations are some of the common mutations found in the helicase.

Read our article on mutation: Different types of Genetic mutations

Some of the diseases in which the helicase is involved are Bloom’s syndrome, alpha-thalassemia, xeroderma pigmentation and Cockayne syndrome.

Based on the conserved sequence motif present in helicase, it is divided into six superfamilies: SF1, SF2, SF3, SF4, SF5 and SF6.

Further, the superfamilies can be classified based on their ring forming capacity. The SF1 and SF2 can not form a ring while the rest of the superfamily can form the ring-like structure. 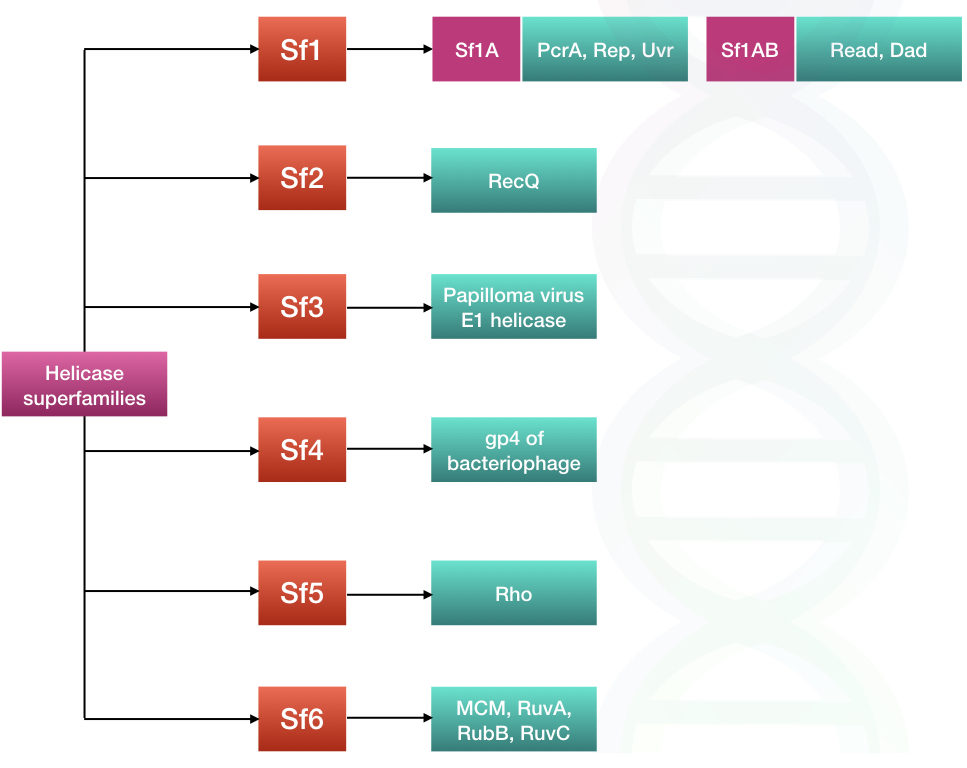 Read next: What Is DNA Ligase? And How T4 DNA Ligase Works?

Commonest helicase, called DanB is present in bacteria and some other prokaryotes that start replication by unwinding dsDNA strands.

Denaturation step during the PCR reaction replaces the requirement of helicase during in vitro DNA amplification.