“Genetics is a study of DNA, gene and chromosomes.”

Genetics is a very vast field. It comprises the study of the genetic composition of any organism on earth.

In each subdiscipline, the aim of the study is different. For example, in cytogenetics, we are study chromosomes while in microbial genetics we are studying the DNA of different microbes.

We have covered a beautiful article on the branches of genetics. You can read it here: Introduction To Genetics: Definition, History, Applications And Branches.

Using the state of the art technologies like PCR, sequencing, microarray, rtPCR and other related assays, here, we investigate DNA, genes and chromosomes to find out mutations or variations.

In addition to this, gene expression and mutational studies are also considered in genetic studies as well.

So we all know about DNA, gene and chromosomes right! If not, quickly go through these articles and come back here:

In the present article, we are going to enlist some definitions of genetics. Also, we are discussing some other definitions commonly used in genetics and genetic studies.

At the end of this article, after studying all the definition we will state the best definition of genetics as per our knowledge.

So let’s start the topics.

The word genetics came from the ancient Greek word “genetikos“. Its meaning is generative. And the word “genetikos” was derived from “genesis“. Genesis means “origin“. So broadly the meaning of genetics is the origin (of something) or evolution.

In 1905, zoologist Adam Sedgwick coined the term “genetics”. However, it was studied before his findings by Mendel. He failed to defines what passing from parents to their offspring.

The term “gene” was studied and described by Wilhelm Johannson.

Some literature says that the word was coined by Bateson. Actually, Batson is the person used “genetics” word publically during his presentation in 1906.

Here the aim of writing the present article is to define the genetics or to state an exact interpretation of the term genetics in our way.

But before that let’s see some of the top genetics definition on the web. We will carefully analyse it and try to understand it.

Some definitions of genetics: 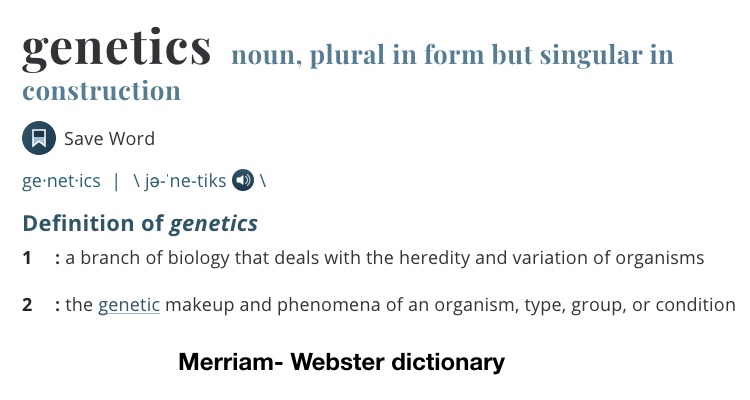 One of the biggest online definition collection the “dictionary.com” defines the same term as,

MedicineNet is also a great place to learn medical science and genetics online. Their resources are more trusted and they define genetics as,

At last, WHO, Colins dictionary and Vocabulary’s definition of genetics are given below. 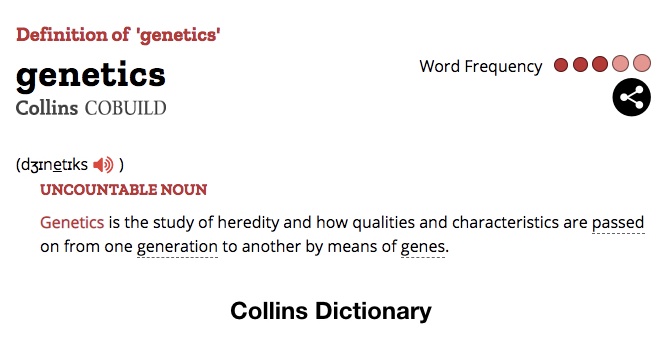 Ok so now what we are doing is, we are extracting the key elements used in all these definitions.

First, it is a branch of science.

It’s a study of heredity & variations, resemblance & differences, characters & qualities, how it is passing on and interaction of gene with the environment.

Notably, not all these points are covered in a single definition thus I can say not all the definites stated here completely define genetics, indeed.

I am explaining to you what all these mean.

Characters and qualities: In the context of genetics, we can denote is as phenotypes and traits.

For example, eye colour, hair colour and skin colour are some characters (or phenotype). And in which amount or which shade of colour it produced are qualities, in a broader sense.

Passing on characters from parents to their offspring follows different patterns like autosomal dominant, autosomal recessive, X linked dominant or X-linked recessive. You can read about all these terminologies in this article: Genetic Inheritance.

Genes interact with the environment and create different variations. Some causes disease and some help in evolution.

Genes control or govern all these factors or traits. It encodes proteins and made up of the long chain of deoxyribose nucleic acid-DNA. Furthermore, they are located on chromosomes.

So overall, the study of all these are covered in genetics.

See the green blocks in the image above. Technologies such as PCR, DNA sequencing, microarray and cytogenetics are used for studying genetic abnormalities. So these must be included in the definition, right!

In addition to all these, mutations and genetic abnormalities are also investigated in the same. Now it is confirmed that the term “genetics” can’t be defined using any single paramere given above.

So let’s define the term genetics,

“The Interdisciplinary branch of science, dealing with the study of DNA, gene, chromosome, heredity, variations or mutations and associated genetic disorders using state of the art genetic technologies like PCR, DNA sequencing or cytogenetics, the whole subject is known as genetics.”

Now it makes sense. Am I right!

Let’s make it too short,

“Investigating DNA, genes, chromosomes, mutations and heredity to illustrate their role in genetic disorders using genetic techniques, the branch of the science is known as genetics.”

I think it’s a bit complicated but for a genetics student, it is a correct explanation of genetics. To support our present definition, let us understand several terminologies used in genetic science.

Nucleic acid– A chain of sugar, phosphate and nitrogenous bases, present in the nucleus of a cell and function to transfer characters is known as nucleic acid.

DNA– The polynucleotide chain- a type of nucleic acid made up of adenine, thymine, guanine and cytosine is called a DNA.

RNA– The polynucleotide chain- a type of nucleic acid made up of adenine, uracil, guanine and cytosine is called an RNA.

Replication– the complete process of coping DNA by the specialised enzyme DNA polymerase is referred to as DNA replication.

Translation– Translation is the process of formation of protein from mRNA using the mRNA, rRNA and tRNA.

Gene– The functional unit of inheritance is known as a gene.

Allele– An alternative forms of a gene which transfer different genotypes are called alleles.

Chromosome– The complex network of DNA and proteins on which genes are located is known as a chromosome.

Gene mutation– Any alteration or sequence variation in a DNA sequence is a gene mutation.

Aneuploidy– Aneuploidy is the condition of change in chromosome number, above or below the normal chromosomes.

Trisomy– Addition of an extra copy of the chromosome due to the event of nondisjunction is known as trisomy.

Monosomy– Absence of copy of the chromosome is known as monosomy.

Genome– The complete set or all genes or all DNA of an organism is a genome.

Helicase– The enzyme that unwinds the DNA during replication.

Topoisomerase– The class of enzyme that releases the tension of DNA during the process of replication.

Primer– A short single-stranded DNA or RNA helps in starting DNA synthesis is referred to as primer, either DNA primer or RNA primer.

Transposons– Also known as transposable elements are the non-coding DNA that can move from one location to another into the genome.

Homozygous–  When a cell contains the same types of alleles, either both dominant or both recessive, the condition is referred to as homozygous.

Heterozygous– When a cell contains two different types of alleles, one dominant and one recessive, the condition is referred to as heterozygous.

Inheritance– transfer of genotype or gene from one generation to another is known as the inheritance of traits. 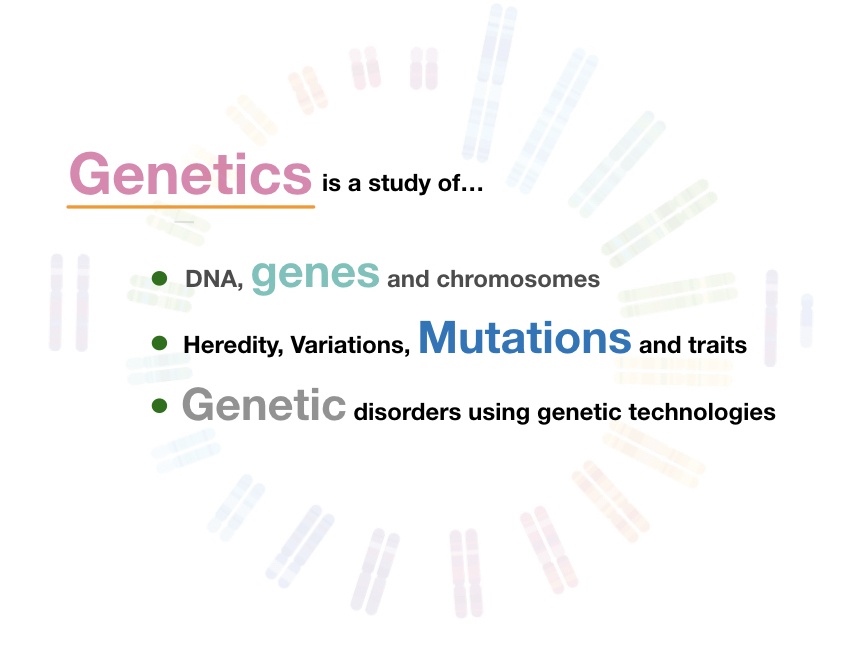 Conclusively, we can say, genetics is an enormous branch and now it’s become growing fast. Not only genes and chromosomes but gene expressions and DNA-protein interactions are also studying in genetics, nowadays.

The entire sub-field of genetics dealing with the study of gene expression is referred to as epigenetics.