“Genetic disorders occur due to alterations in either gene, DNA or chromosome which can cause serious health or medical problems.”

The vast majority of genetic disorders are incurable and have a complete phenotypic profile. Using state of the art genetic technologies, genetic abnormalities can screen or diagnose. Those are karyotyping, polymerase chain reaction, FISH, DNA microarray, DNA sequencing and methylation assays.

The abnormality occurs mainly due to mutations- mutations in either gene or chromosome.

“Any alteration (deletion, addition, duplication or inversion) occurs in a gene or DNA sequence is known as gene mutation.”

On the other side.

“Any alteration or variation (deletion, addition, duplication, invention or change in number) happens in a chromosome is known as chromosomal mutation.”

Besides these major two types of categories, some other type of mutations also occurs in a genome.

In the present condition, some of the triplet codons abnormally expand over its normal range. For example, CAG repeats in case of Huntington’s disease.

Change in gene expression but not in a gene sequence also causes some serious genetic problems categorised in epigenetic alterations.

Simply, we can say, in the epigenetic alteration, the order and the sequence of a gene remains normal but it’s expression changes abnormally in a particular cell or tissue.

Further, the gene or chromosomal mutations categorised into different categorised. See the image below, 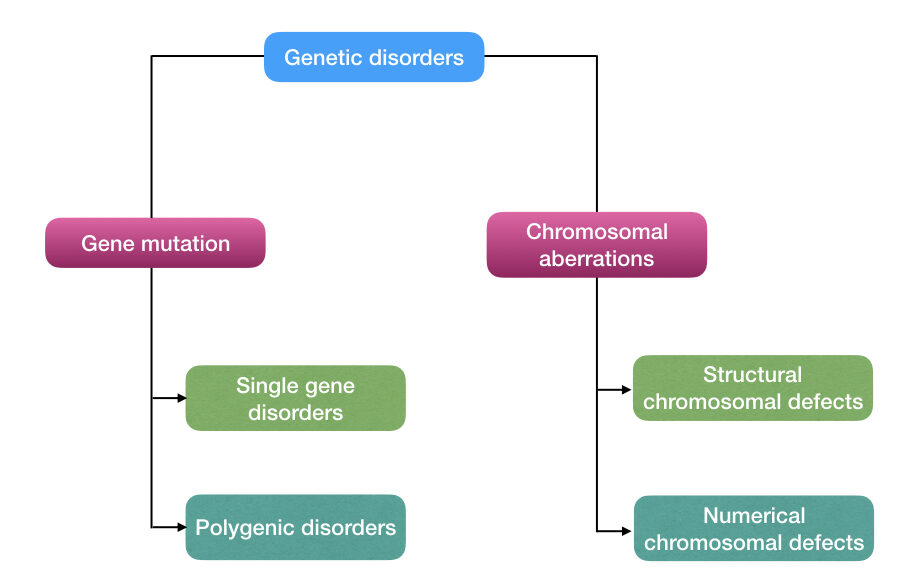 Single gene disorder: only one particular gene either autosomal or sex-linked gene involves in genetic abnormality.

Polygenic disorder- more than a single gene are involved in genetic abnormality. Notably, the inheritance pattern of polygenic disorders is not well determined. It is also known as multigenic or complex genetic disorders.

You can read our dedicated article on mutation here: different types of genetic mutations.

Further, we also had covered an amazing article on different types of inheritance patterns such as autosomal dominant, autosomal recessive, X-linked dominant and X-linked recessive.

Thus we will not discuss it here again. For more detail, go and read the article first: Different types of genetic inheritance.

Here in the present article, we will give you an overview of some of the common types of genetic disorders. Although, it is just a broad overview, still, you can understand it properly.

Alpha thalassemia is a blood disorder often known as haemoglobinopathies.

Cause: a mutation in one of the genes given above. Deletion on the p arm of chromosome 16 is most common.

Prevalence: The present genetic condition is more prevalent in India and central Asia.

Like the alpha-thalassemia, the present genetic condition is also a common type of haemoglobinopathies.

Causes: mutations in the HBB gene.

Prolonged internal bleeding commonly found in the patient with the present conditions.

Inheritance: both haemophilia A and B inherited as X-linked recessive pattern.

Causes: mutation/ mutations in the F8 gene of the X chromosome.

The sickle cell anaemia is a type of blood disorders most commonly observed worldwide. The HbS allele was originally evolved to protect against the malaria parasite.

Causes: a mutation in the HBB gene.

Gene: Although more than 15 genes are involved in it. FANCA, FANCC, FANCG are the three most common genes.

Inheritance: Autosomal recessive and X-linked recessive for some genes.

Thick mucus observed due to mutations in the CFTR gene, more common symptoms is related to lung and breathing problems.

Causes: Mutations in the CFTR gene

The present genetic condition is related to the brain and neuro-system hence called as a progressive neurodegenerative disorder.

Causes: Abnormal expansion of CAG triplet repeat is the reason for Huntington’s disease. More than 35 CAG repeat cause severe abnormalities.

Causes: Mutations in the DMD gene

The BMD is another type of muscular dystrophy commonly observed with progressive muscle weakness.

Cause: a mutation in the DMD gene

Neurofibromatosis type 1 is a genetic disorder of uncontrolled tumor formation on face and other body parts.

Cause: Mutation in the NF1 gene forms abnormal neurofibromin protein. It losses its tumor suppressor power.

The present genetic disorder is characterised as the presence of acoustic neuromas or vestibular schwannomas. It’s a type of noncancerous tumors.

Symptoms: Presence of acoustic neuromas, problems in balancing and hearing, ringing in ears, vision impairments, seizure and glaucoma of neurons.

Down syndrome is one of the most common types of chromosomal disabilities associated with intellectual and developmental disabilities.

Cause: An event called nondisjunction causes an extra copy of chromosome number 21.

Prevalence: the global prevalence of Down syndrome is 1 in 800 newborns.

Yet another type of chromosomal abnormality associated with a developmental and intellectual disability is known as Patau syndrome.

Cause: Likewise the trisomy 21, the event of nondisjunction results in an extra copy of chromosome number 13 in the fetus.

Cause: Trisomy of 18. Due to the event called nondisjunction results in an extra copy of chromosome 18.

An abnormal genetic condition of extreme sensitivity to the UV rays of sunlight.

Cause: Non-functioning of DNA repair pathway

Prevalence: Although the present condition is more common in Japan and Africa, the prevalence of XP is 1 in 1 million in the united states and Europe.

Breast cancer is a genetic condition in which uncontrolled tumors developed in certain cells of the breast.

Cause: Mutations in BRCA1 or BRCA2 and/or other genes involved in cell division and DNA repair. This results in uncontrolled cell division, especially, in the breast cells.

Symptoms: A tumor in the breast, lump or mass, swelling, nipple pain and retraction, nipple discharge and skin irritation.

Prevalence: breast cancer is one of the common genetic abnormalities observed in women. About 1 in 8 American women will have invasive breast cancer in her lifetime.

Turner syndrome is a type of chromosomal aberration that occurs due to the absence of one X chromosome in females.

Cause: Missing one X chromosome in females.

Symptoms: short status, webbed neck, lymphedema, low hairline at the back of the neck, swelling of hands and feet, skeletal and kidney problem.

Klinefelter syndrome occurs due to an extra copy of chromosome X in males.

Cause: An extra copy of chromosome X in male.

The cri-du-chat syndrome is a type of structural chromosomal alteration also known as cat’s cry or 5p minus syndrome.

Cause: Due to the deletion of the p arm of chromosome 5 results in present condition.

Cause: translocation between chromosome 9 and 22

The present condition occurs due to loss of function mutations in a group of genes.

Cause: Deletion of genes located on chromosome 15

Cause: Abnormal expansion of triplet repeat CGG of FMR1 gene

Symptoms: the majority of problems are related to learning and cognitive disabilities with intellectual disabilities and several mental problems.

A type of sex chromosomal trisomy occurs due to the extra copy of one X chromosome.

Cause: The event of nondisjunction results in one extra copy of the X chromosome.

Symptoms: females taller than average, no severe mental or physical problems, however, females are more at risk of learning and intellectual disabilities.

Cause: loss of function mutation in the AGL gene

Cause: a mutation in the GAA gene

The present genetic condition is mainly associated with abnormal movement problems, related to hands and feet.

Cause: Abnormal expansion of GAA triplet repeat of FXN gene

Symptoms: majorly impaired muscle coordination, loss of sensation in arms and legs and loss of strength.

SCID categorised into the rare genetic disorders occurs due to mutations in genes involved in the development and functioning of immune cells. Although, the X linked SCID occurs due to only a single X-linked gene.

Cause: Mutation in the IL2RG gene

A type of lipid- globotriaosylceramide persistently build up in bodily cells.

Inheritance: X-linked inheritance but not specified whether dominant or recessive.

Cause: Loss of function mutation in the GLA gene

Gaucher’s disease is an inherited genetic disorder categorised on Type 1 as non-neuropathic and Type 2 and 3 as neuropathic.

Cause: loss of function mutation in the GBA gene

Read more on all three types of Gaucher’s disease

An inherited genetic disease Niemann-pick disease or Niemann-pick lipidosis is divided into Type A, B, C1 and C2.

Cause: Mutation in one or many genes enlisted above

Alkaptonuria is a type of rare genetic condition caused by the defect of enzyme homogentisic acid dehydrogenase. The urine of people suffering from alkaptonuria turns black when exposed to air.

Cause: a mutation in the HGD gene

A type of inherited genetic disorder known as PKU increases the level of phenylalanine in the blood is known as phenylketonuria.

Cause: A mutation in the PAH gene decreases the activity of phenylalanine hydroxylase.

Symptoms: accumulation of too much phenylalanine in blood, Skin, urine and breath smells musty, eczema and some neurological problems.

Tay-Sachs disease is a rare genetic condition that occurs due to gene mutations and destroys neurons in the brain and spinal cord.

Cause: a mutation in the HEXA gene causes inactivation of beta-hexosaminidase A.

Symptoms: loss of motor skills, vision and hearing loss, read spot in the eye, the problem in movement and muscle weakness.

Prevalence: the present genetic condition is extremely rare and only found in some Ashkenazi peoples.

The present condition is a type of inherited genetic condition also known as mucopolysaccharidosis type 1 or MPS1.

Cause: Mutation in IDUA gene

The hunter’s syndrome is a type of mucopolysaccharidosis II or MPS II.

Homocystinuria is a type of inherited genetic condition in which some amino acids can’t be processed properly.

Cause: Mutation in any of the gene listed above

The present inherited genetic condition is also associated with the non-processing of some proteins. Due to the typical sweet odour of patients urine, it is known as Maple syrup urine disorder.

Cause: mutations in any of the gene listed above

The G6PD is a type of genetic abnormality categorised as an inborn error of metabolism.

Cause: Mutation in the G6PD gene

Prevalence: 1 in 10 African American males in the United States.

Cause: Mutation in any of the gene listed above

Symptoms: Cysts develop in the kidney and interfere with the kidney function.

The present condition is an inherited genetic condition that occurs due to the higher level of cholesterol in the blood.

Cause: Mutation or alteration in any of the gene listed above

Symptoms: high level of cholesterol in the blood.

The present genetic condition is associated with connective tissue defects.

Cause: a mutation in the FBN1 gene

The present genetic condition characterised by the development of numerous benign tumours in different bodily parts.

Cause: Mutation in any of the TSC gene

Symptoms: a benign tumour in kidney, skin, brain and other body parts, hypopigmented macules, facial rashes and other related complications.

Galactosemia is a condition associated with the accumulation of the sugar galactose in the body.

Cause: a mutation in any of the gene given above