“Trisomy 13 also known as Patau syndrome occurs due to the numerical chromosomal abnormality in which an extra copy of chromosome 13 present with a pair.”

Or in other words, we can say,

Globally, 1 in 10,000 to 16,000 babies suffer from the trisomy 13, the risk of the Patau syndrome increases with increment in the maternal age. Women above 31 of age are at risk of the occurrence of trisomy 13.

The genetic basis or the chromosomal bases of the present disease was reported by the Klaus Patau in 1960, though it was first reported in 1657 by Thomas Bartholin.

In the present article, we will talk about the common type of aneuploidy- trisomy 13.

The event of nondisjunction is the major reason for the occurrence of trisomies and so it is involved in the Patau syndrome as well.

An addition chromosome 13 present with a pair of the same leads to serious health problems. Thus instead two, three copies of chromosome 13 are present in a cell result in total 47 chromosomes.

During the process of meiosis- the process of germ cell division, an uneven distribution of chromosome 13 causes an increment of genetic material in those cells.

Thus instead of a pair, three different chromosomes 13 are present in the germ cells and inherited into the fetus. However, the process of nondisjunction is totally random.

The extra genetic material disrupts the development of the fetus and results in severe intellectual and physical disabilities.

Based on the quantity of the extra genetic material, the trisomy 13 can be divided into three categories similarly the trisomy 18 or Edwards syndrome.

Approximately 20% of trisomy 13 cases are translocation trisomy 13 which can be inherited, unlike the other trisomies.

Here, during the meiosis of germ cells (sperm or egg) some portion of the chromosome 13 detached and translocated to some other chromosome randomly.

However, the sign and the symptom of the disease with the translocation trisomy 13 differ based on the amount of the portion of chromosome 13 translocated. But it is less severe than the complete trisomy.

The sign and symptoms of disease with mosaic trisomy 13 are mild to moderate and also, it depends on how many cells contain trisomy.

Yet, another rarest form of the Patau syndrome is the partial trisomy 13, here, only some portion of the chromosome 13 inherited with the pair- not entire chromosome.

The common form of the Patau syndrome is the complete trisomy 13 in which three different chromosomes 13 inherited into the fetus.

More than 80% of cases of Patau syndrome are complete trisomy and the sign and symptoms of the disease are more severe as well as problematic.

Complete and mosaic form of the trisomy 13 is non-inherited. Although some cases with the translocation trisomy 13 are reported to be inherited.

Thus the probability of the recurrence of trisomy 13 is very less or negligible unless one of the parents have translocation trisomy.

Based on the amount of the extra copy of the chromosome 13 present with a pair; responsible for the severity of the disease.

However, mental, intellectual and physical abnormalities are more commonly observed. Some of the symptoms of the Patau syndrome- trisomy 13 are:

Trisomy 13 is one of the common types of trisomy, besides down syndrome with serious and complicated health issues.

However, babies with partial or mosaic trisomy 13 can live up to the adulthood or above but those cases are very rare.

Majority of the cases with the complete trisomy 13 may die in a day or within a year after birth.

Image shows some of the facial abnormalities associated with Patau syndrome.

Some other pictures of trisomy 13 with facial, feet or hand abnormalities are shown into the figure below, 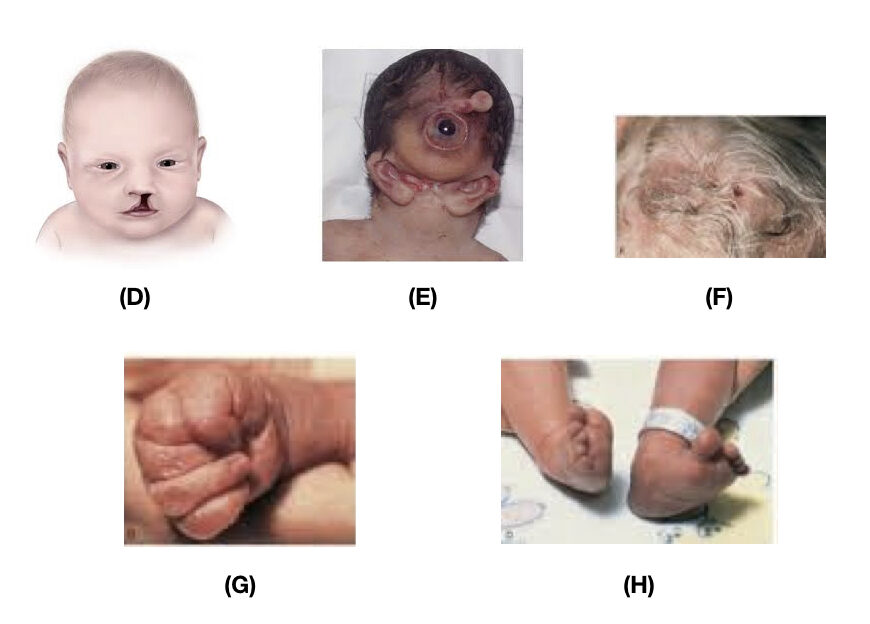 As we explained in the previous article two common methods are most trustworthy for encountering the trisomy i.e ultrasound and genetic analysis.

The initial indication of the disease can be diagnosed using the ultrasound method in the early period of the pregnancy.

However, genetic testing or cytogenetic analysis must be required for validating the ultrasound indications. 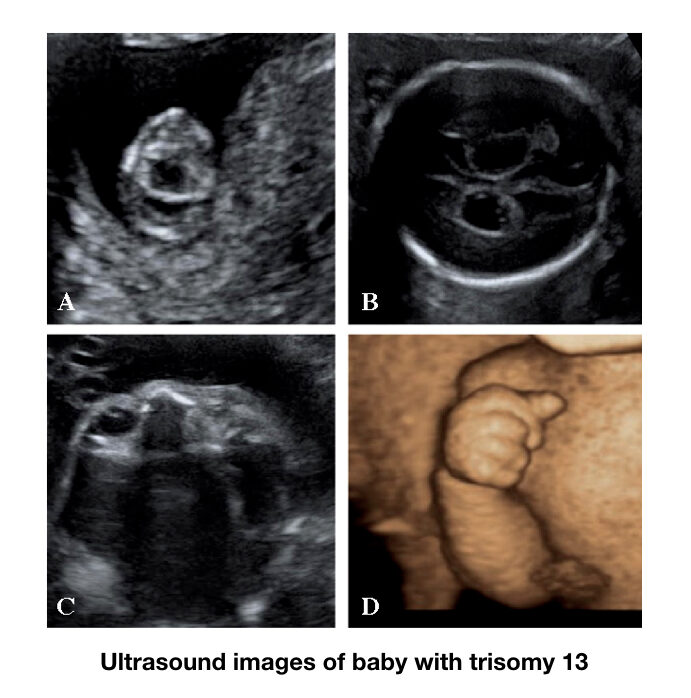 The ultrasound indications of baby with trisomy 13.

For cytogenetic analysis, amniotic fluid (the technique is called amniocentesis) or chorionic villi sample is taken and cultured for getting metaphase cells. 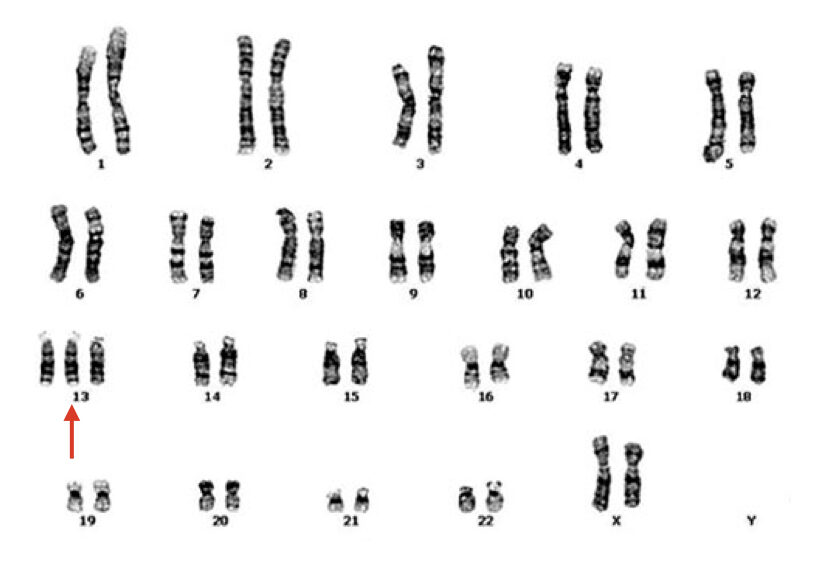 Another emerging genetic testing method nowadays scientists are using is known as cell-free DNA testing in which circulating fragments of fetal DNA is isolated from the mother’s blood and employed for encountering trisomy.

Though the mortality rate of the Patau syndrome is high, individuals with less serious symptoms can survive in some cases if proper treatment is given in the early days.

The treatment of the Patau syndrome may vary on the basis of the type of symptoms shown in individual.

For example, speech and mental treatment or therapies are given to improve patients psychological and mental health.

Individuals with mosaic or partial condition can live up to adulthood or more, however, the majority of patients die within a few weeks, proper treatment can help to improve patients health.

Physical surgeries can help to repair the heart defect or cleft lips.

Overall, the mortality rate of the trisomies is very high except, trisomy 21. Babies with trisomy 13 may die in early life, in a day or in a few weeks due to complex mental, physical and neurological problems.

Notwithstanding this, in a few cases with mild to moderate Patau syndrome can live up to a year or up to 10 years. However, extensive case, management and treatments are required.

Approximately 10 to 13% of babies with trisomy 13 may survive up to 10 years. In comparison with trisomy 21, the survival rate of Patau syndrome is very low.

Even if a patient may survive up to some extinct, he or she has to face so many mental, motor and physical problems, unlike the normal child, their life is not at all normal.

First of all, don’t be panic if your pregnancy is diagnosed with Patau syndrome or trisomy 13.

Do not take any decision in a rush, immediately contact the genetic counsellor near you.

The recurrence risk associated with the trisomy 13 is very less, so the chance of your second pregnancy being affect with Patau syndrome is very less.

As I said in the previous article, the event occurs totally random, none of the parents is responsible for it so do not blame each other for that.

Instead of that, understand the situation and behave accordingly, try to support your partner.

Yes, it is an emotional trauma for the mother, think positive, this can happen to anyone.

If your doctor advises you for abortion, think on it, don’t be so emotional, ultimately your family has to face the mental, social and economic problems.

If there is a 10% chance that your baby may live, you should go for it but remember, you have to face so many problems, in addition to this, your baby has to face problems too.

Also, living with the present condition can impact the daily lives of a parent, one of the parents should always take care of the baby.

Conclusively, trisomy 13 is non-inherited genetic (more precisely) chromosomal aberration which causes serious health problem. Prenatal diagnosis is the only way to prevent Patau syndrome, till date, no medications or treatment for the trisomy 13 are available.