The human genome is made up of DNA, a long chain of nitrogenous bases; adenine, thymine, cytosine and guanine called polynucleotide chain.

The major portion of the human genome is non-coding, however, the coding segment encodes different proteins for different functions.

Any alteration into the DNA which causes a change in the genotype is a mutation. The mutation may be an addition, deletion, duplication, inversion or translocation in a DNA sequence.

SNP is one of a kind of genetic mutation/ alteration which arises due to addition or deletion of a single nucleotide into the DNA sequence. 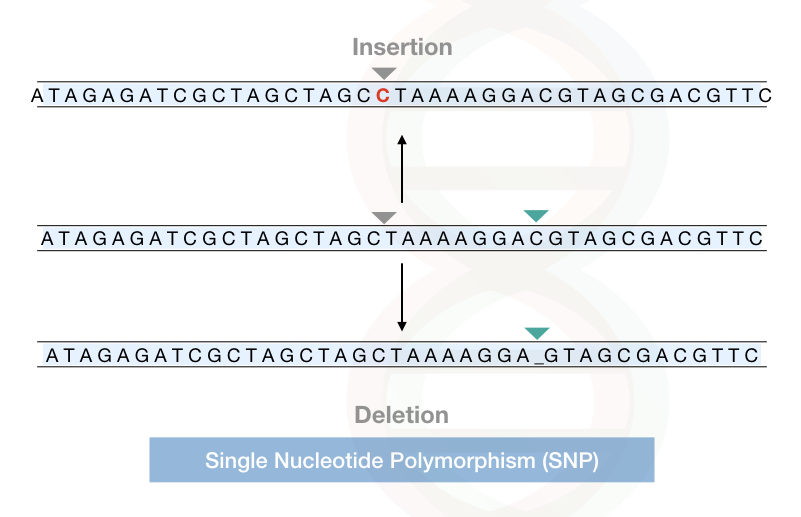 Due to the adverse environmental conditions, stress and unhealthy lifestyle many single nucleotide alterations are inserted or deleted in a genome.

In a population, if a specific SNP, at specific location occurred for more than 1% then it is characterised as true SNP.

In the present article, we will briefly introduce you about the SNP and its prevalence in our genome.

Now, let us start with some basics,

What is SNP (single nucleotide polymorphism)?

In a simple language, we can say, a single nucleotide change in a DNA sequence is called as SNP.

Thalassemia, sickle cell anaemia, cystic fibrosis etc are the best examples of it. The abnormal conditions in these disorders are originated due to a single SNP. 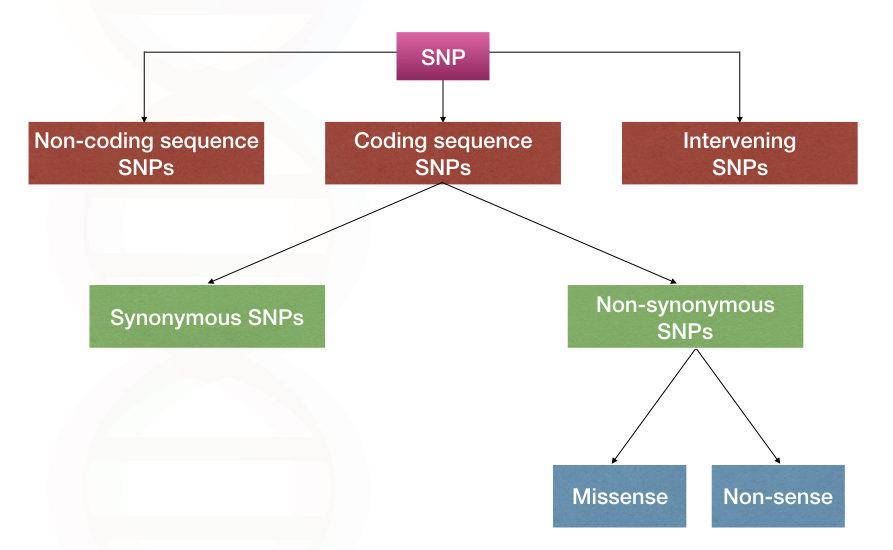 Hypothetically, it is believed that SNP in the non-coding regions does not have any specific effect on the phenotype. But it is not true.

The gene expression, gene splicing and transcriptional regulation activities are governed by the non-coding DNA.

Till date, scientists have found more than 100 million SNPs from the population which are associated with different diseases.

On an average, an SNP occurs at every 1000 nucleotides thus approximately 4 to 5 million SNPs may present in an individual’s genome.

As we discussed in the earlier segment,  most SNPs are present in the non-coding regions or between the regions of genes thus it does not have a direct role in the disease development or does not have directly affects one’s health.

Different alleles arise due to SNPs, One SNP results in the origination of two alleles of one particular gene.

“The alternative forms of a gene are called alleles.” 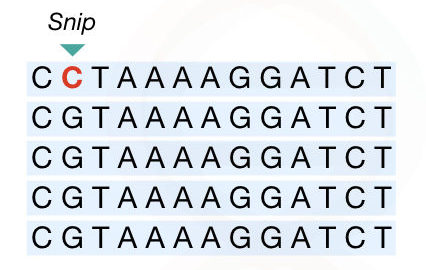 “A new variation, a new allele.”

This indicates that in the same gene in the same population three different alleles are present. See the image below,

The three different varieties of the alleles are occurred due to the SNP (named as c.5A>C/G). Therefore, we can say that the single nucleotide polymorphism is responsible for the origination of new variations.

Different nomenclature methods for the SNP exist for different databases.

The meaning of the SNP is, c- codon, at the codon 122, the nucleotide A (adenine) is replaced with the T (thymine).

Some other database also has a nomenclature method like rs53576.

The SNP is one of the best genetic markers for genomic and genetic research.

It is used in the linkage disequilibrium studies and finding the disease probability.

The SNP is a kind of a genetic marker used in the determination of disease or trait and its association with the genetic variations.

It is also used in the haplotype mapping.

Some SNPs are also directly responsible for genetic disease, such diseases can be diagnosed by analysing the SNP.

In modern genetics, the application of SNPs is tremendously increased for the personalized genetic analysis.

Some of the important SNP databases are enlisted here,

The dbSNP database of NCBI is one of the best databases for searching the single base variations.

It contains information for both common variations occurs in the genome and clinical mutations or variations.

Furthermore, it has a database of related publications and other minor deletions or insertion.

(rs1815739, paste this SNP in the search box of the link given above and see the results what data its shows).

Kaviar, Known VARiants are another database of the SNPs contains 162 million SNP or SNV sites from the genome.

Although, the Kaviar database does not contain the SNP information related to cancer.

SNPedia is another non-official SNP database governed by Wikipedia.

The SNPs are one of the most important genetic markers used by researchers to study the variation in the human genome because it has so many applications.

Several methods for SNP genotyping is enlisted here can be used for the SNP analysis:

Now, let’s discuss some of the methods how it is used for the SNP analysis:

Methods for detection of known SNPs:

The PCR RFLP method of SNP detection is one of the traditional methods of detection. Restriction fragment length polymorphism is a restriction enzyme-based polymorphism detection method. Yet, only known SNP can be detected by RFLP.

Read further: What is Restriction Digestion and how to do it?

The method is a combination of restriction digestion and PCR amplification. Here the amplified fragment of our interest is further digested with the help of the specific restriction endonuclease.

The endonuclease cuts or cleaves the DNA at its specific recognition site. If the sequence contains the restriction site, it will cleaved otherwise remains uncut.

Microarray is a method used for the detection of known mutations, SNP or copy number variation.

Millions of mutations or preciously called the copy number variation can be detected using the SNP array.

Briefly,  in the microarray, the SNP specific oligos are immobilized on the glass slide and hybridization can be done on it.

If the oligo sequence finds the complementary sequence it will hybridize otherwise removed by washing.

The scanner scans the pattern of hybridization and based on that the SNP results will be displayed.

DNA sequencing is one of the best method for the detection of any type of unknown mutations present in a gene. And so the SNP too.

Any of the new SNP originated in the population can be identified using the DNA sequencing method.

Even, using the techniques like the next-generation sequencing, one can identify many SNPs at once and even compare it with other samples too, in a single run.

The genome-wide association study, one of the emerging methods is entirely based on the SNP analysis. Millions of SNP are scanned from the population. The common SNPs associated with the disease are identified and tagged for personalized genomic analysis and prediction of disease status.

Read our article of GWAS: An Introduction To Genome-Wide Association Study (GWAS).