An extra copy of chromosome 18 present along with a pair causes the condition known as trisomy 18 or Edward’s syndrome; a type of numerical chromosomal abnormality.

Trisomy 21, trisomy 18 and trisomy 13 are common among chromosomal aberrations and a kind of aneuploidy in which one extra chromosome increases the genetic content.

Though the reasons behind the occurrence of trisomies are unknown; unbalanced chromosomal distribution/ non-disjunction is the possible reason. Unlike DNA or gene mutations, trisomies are non-inherited in most cases. meaning, it can’t pass down to progenies.

A change in the chromosome number, we know as aneuploidy is a category in which the trisomies included. Here copy numbers increase and instead of 46, a total of 47 chromosomes are reported in a cell. This causes serious health-related congenital issues for a fetus.

Here is the article, explaining one of the most common aneuploidies, trisomy 18, its symptoms, the reason for occurrence and other related information. We also have explained methods to diagnose the condition.

A trisomy 18,  also known as Edwards’ syndrome is a rare form of chromosomal aberration and a type of congenital genetic abnormality that causes serious health problems. In 1960, John Hilton Edwards first reported it, from his name it is also known as Edward’s syndrome.

1 in ~7000 newborns suffers from trisomy 18 worldwide. Sadly, babies with Edward’s syndrome die before or immediately after birth. It is the second most common type of autosomal trisomy after Down syndrome.

Cytologically the condition of trisomy 18 is known as 47 XX/XY, +18

There are three common types on which the severity of the disease and mortality rate depends.

It occurs by birth during the meiosis cell division, the baby may die during the pregnancy or immediately after birth. This condition has a higher mortality rate.

At a molecular level, the entire set of genes located on chromosome 18 gets triplicated and increases copy number (genetic content). Majorities of Edward’s syndrome are complete trisomy 18.

Yet another form of trisomy observed is the partial one! in which instead of the whole chromosome, some portion, arm, or part is present with the pair. This means a change in the copy number depends on which portion is present. Interestingly, the severity of the disease depends on the amount of portion copied and genes present in it.

Scientists still don’t understand the mechanism behind partial trisomy and how it occurs.

Recent findings suggest that the partial trisomy may occur in one of the parents and possibly inherited from them. In comparison to the complete trisomy, babies with this condition may live up to adulthood, although complex physical and mental problems are reported.

Mosaic trisomy condition is also reported in a few cases. Here two different cell populations; one with trisomy 18 and one with normal diploid chromosome 18 are present in a fetus. Put simply, some cells have 47 chromosomes while some have 46.

This complex condition is rare but has a definite effect on phenotypes, as the severity of the conditions depends on the amount of mosaicism.

10% trisomy 18 cases are mosaic. Babies with this condition may live up to adulthood with complex physical and mental conditions. the present condition is caused by the partial non-disjunction during either meiosis 1 or 2.

Now, let’s move to the next section explaining the possible reasons or cause of trisomy 18, how it occurs?

Non-disjunction, the event occurs during the cell division is the reason for trisomy 18 and cause serious physical and mental problems. When germ cells fuse (egg and sperm), the embryo forms. Aneuploidies like Edward’s syndrome happens when non-disjunction causes an error during meiosis 1 or miosis 2 of either germ cell division.

This leads to an imbalance or improper distribution of chromosomes in germ cells. consequently, abnormal fetus forms, having imbalanced chromosome numbers in all or some cells.

As we discussed, germs cells are haploid in nature, meaning, only have single pair of 23 chromosomes. Each germ cell contributes 23 chromosomes and forms a diploid fetus.

The second round of meiosis (in most cases) of one of the germ cells causes trisomy. It is believed that the origin of the trisomy is maternal with more than 90% of cases of complete trisomy. Trisomy 18 is caused by the nondisjunction process of uneven chromosomal distribution.

“Trisomy 18 is a type of chromosomal aberration in which an extra copy of chromosome 18 occurs with a pair through the process of non-disjunction.”

A wide range of mental as well as physical symptoms is shown in trisomy 18. Some of the common symptoms are:

Note: nearly 100K cases of trisomy are reported in India.

Here in this section, we have extracted some pictures showing the abnormalities associated with the present condition, which dictate the scenario well.

Pregnancies with trisomy 18 are at high risk of stillbirth, fetal loss and fetal death.

Ultrasound and karyotyping- a type of genetic test are commonly used as a diagnostic tool for screening the trisomy 18 in which the karyotyping is employed to validate the results of the ultrasound.

In addition to this, a new age genetic test is also now utilized for screening of present condition which we will discuss in this part later.

The preliminary screening method for any kind of trisomy is the ultrasound, however, results should be validated or cross verified using other genetic testings.

Indications are observed during 10 14 weeks of pregnancy using ultrasound. if any abnormality reported, experts refer patients for genetic testing to get more information. 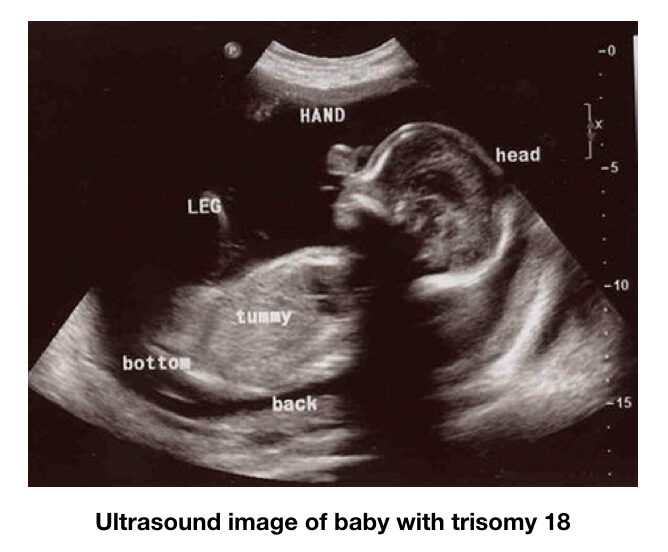 Karyotyping or fetal karyotping is a technique commonly utilized for screening trisomies or any other aneuploidies associated with the fetus and is also known as chromosome test; a form of genetic testing method to observe and analyze chromosomes.

Here first, amniotic fluid (amniocentesis) or chorionic villi sample is taken from the fetus and send to the genetic laboratory.

The genetic professional grows the metaphase cells to obtain metaphase chromosomes and then performs karyotyping to find our genetic aberrations associated with chromosomes.

Using the G banding or Giemsa banding technique chromosomal aberrations can be encountered if any.

A karyogram is prepared using the help of computer software which helps in finding numerical or structural chromosomal anomalies associated with it.

Besides trisomy 18 other trisomies like trisomy 21 or trisomy 13 can also be encountered using this method. Although the method is painful- invasive and the chance or risk of pregnancy loss is higher. This article may help you to learn more on karyotyping: A Karyotyping Protocol For Peripheral Blood Lymphocyte Culture.

Nowadays scientists are using the non-invasive method to screen the trisomy 18 known as NIPD, often known as cell-free fetal DNA testing. During the pregnancy, some amount of fetal DNA is also circulating in the mother’s blood, called cell-free DNA.

From the mother’s blood, fetal DNA is isolated and using which a genetic test is performed to encounter the trisomy 18. Generally, quantitative PCR employed to do so. The fetal DNAs are very less thus sometimes it can not give results, though, it is non-invasive.

Henceforth, unlike conventional karyotyping, it can not practice frequently. More research, protocols and validation are required to use the non-invasive techniques in diagnostics.

The expert also advises other tests around 21 weeks to rule out any genetic abnormalities.

The average life span of babies with trisomy 18 or complete trisomy 18 is 2 days to 2 weeks. Most babies die in the womb or immediately after birth.

Babies with mosaic or partial trisomy can live up to adulthood though. Up to 80% of babies with Edwards’ syndrome die within 21 hours.

5-10% of babies with trisomy 18 may survive beyond the age of 1 year with mild to moderate other mental and physical problems.

Interestingly, approximately 80% of cases of trisomy 18 are female, we can say pregnancy with a female fetus is at more risk of trisomy 18.

-The prevalence of Edward syndrome is high in female babies, however, the rate of fetal mortality is higher in a male fetus.

Suggestions for parents for making a decision:

No one can force anyone for aborting their child, it is the parents’ own decision, especially, it is a mother’s decision. Many social and emotional issues are associated with it, therefore, we can advise a couple what to do next if the pregnancy is diagnosed with trisomy 18 positive.

First of all, don’t be panic or emotional, immediately contact your doctor.

Stay calm and explain the situation to your doctor and understand what they are saying regarding it.

Keep in mind that, there are fewer chances, the fetus with trisomy 18 may survive even after a year.

Even if it may, parents have to suffer emotionally, economically and socially; no one wants to see their child suffering from pain.

So if your doctor or genetic counselor advises for abortion; calmly think about it.

It is a non-inherited condition and totally random, until and unless one of you has any chromosomal abnormalities associated with chromosome 18.

None of you (not you or your husband) is responsible for it, so do not blame each other for that and understand the situation.

Even if one of you does not want to abort it, respect each other’s decision and go ahead.

Remember, the chance of occurrence of trisomy 18 increases as the maternal age increases. Females over the age of 30 are comparatively at high risk of trisomy 18.

No such treatments are available for trisomy 18 thus prenatal screening programs are must required to prevent genetic abnormalities like trisomy 18. Trisomy 18 does not follow any specific inheritance pattern, so the chance of inheritance in the next pregnancy is negligible.

A fetus can’t live longer with it so parents have to make decisions wisely, however, it is tough as well. Developmental, cognitive and mental issues are associated with trisomy 18.