The short tandem repeats often known as microsatellite are the short repeats of 1 to 6bp occurred 10-50 times in a sequence. The STR is an unmatched tool for forensic analysis and DNA testing.

Although the main function of a DNA is to encode a functional protein, a major portion of the genome is made up of the non-coding DNA.

The majority of the junk DNA sequences are repeated DNA and are located majorly on the telomeric region of a chromosome.

It is believed that non-coding regions are non-function, it is involved in the epigenetic regulations. Furthermore, some of the repeats are located in a specific pattern that can be used in the DNA testing and identification of an individual or organism.

STRs (short tandem repeats) are one of those types of repeats used as genetic analysis and DNA testing tools.

In the present article, we will understand how STR marker is used in the genetic analysis and what are its applications.

STRs are short tandem repeats located on the telomeric region often known as microsatellite. The highly polymorphic regions of DNA repeated 5-50 times are called as the microsatellite.

The STRs are present in almost all organisms on earth, ranging from prokaryotic bacterial to eukaryotes.

The major portion of the human genome is the same in all, However, the microsatellites and minisatellites are varies in number.

And hence it is a very good tool for the identification of a person. No two persons on the earth have the same microsatellite profile.

3 to 4% of the total human genome is made up of the Short tandem repeats, in which only 8 to 10% STRs are located on the coding regions.

Short= ranging from 1 to 6 nucleotides., Tandem= located one after another at a specific location and Repeats=  repeatedly present at a specific interval. 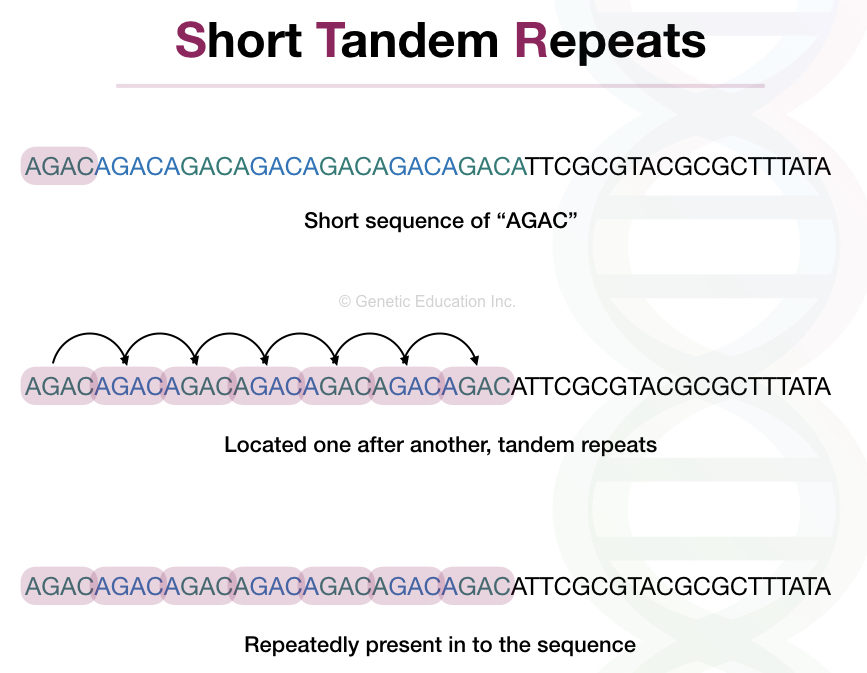 STRs are not involved in any of the pathogenic disease conditions, however, some STRs in bacteria are responsible for dysregulation of their functional genes.

As per the recent data, more than 20,000 tetranucleotide STRs are characterised into the human genome.

ISFH, the DNA Commission of the International Society of Forensic Haemogenetics proposed the nomenclature method of STRs in the year 1993.

D13S317, D17S30 etc are some of the common STRs used in the paternity verification.

Here the D is for DNA which is located on chromosome number 13.

Therefore, for instance, D17S317, the STR marker is located on Chromosome number 17 having the unique sequence number of 317.

Most of the STR markers are named in this manner, however, the method is not always used for all types of STR markers. Some of the other types of markers are ApoB, APOA2 and CYAR04 etc.

Why short tandem repeats are used in DNA testing?

Along with the VNTR, the STR is frequently used in almost all DNA testing protocol, from forensic analysis to parental verification.

The STR has several unique characteristics that make it a powerful marker to use in different DNA tests.

STR markers are abundantly found in the genome of every organism and are codominant.

The STR is extremely heterozygous.

Which means that we always observe two different allele band during the gel run, one from father and one from mother.

The alleles are distinguishable.

Two different alleles are always observed during STR analysis, furthermore, these alleles are easily distinguishable from one another. See the gel image given below.

The STR markers can easily amplify during PCR.

The majority of STRs are “A” or “AT” rich sequence hence the GC content of STR sequences are very low.

This is the reason, it can be amplified easily and accurately.

Furthermore, the band size of STR are ranging from 100bp to ~500bp, therefore, no lengthy PCR reaction preparation and optimizations are required to amplify it.

The protocol given below is the best recipe for STR-PCR.

In addition to this, the majority of STR markers are located on the non-coding regions of the genome and are not involved in the epigenetics regulations as well.

It is highly polymorphic.

The mutation rate of STR sequences are higher which means that the chance of creating a new variation is always very high (polymorphic).

STR mutation can occur during Crossing over in meiosis,  retrotransposition and strand slippage during replication.

[epcl_box type=”information”]The THO1 STR allele 6 and 8 are found in 4% of individuals on earth. Therefore use different combinations of at least 10 to 12 STR markers. [/epcl_box]

PCR is one of the most routinely used techniques in genetic science. It is also used in DNA testing, an STR-PCR or short tandem repeat polymerase chain reaction is a method to do this work.

For doing any PCR reaction we have to extract a DNA from the sample.

In the case of the forensic analysis, the sample might be blood, saliva, hair, semen or any other body fluid. Extract DNA using one of the methods enlisted below,

Or you can use ready to use DNA extraction kit if the sample is very less.

The extracted DNA must have a purity of ~1.80 and a quantity of more than 30ng.

For example, if we use a marker named D13S317, located on chromosome number 13. Can be amplified using the primer sets given below, 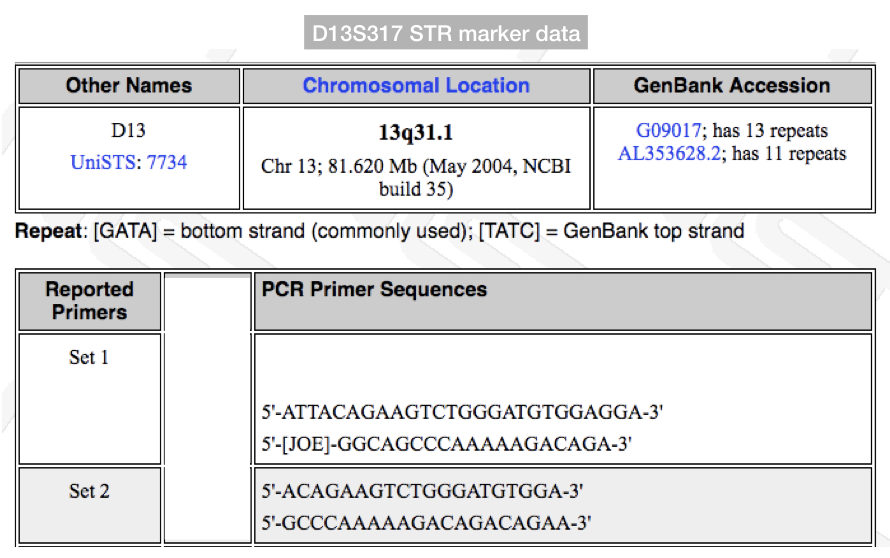 Using the method of in silico PCR, we can cross-check our primer whether it is correctly bound to our sequence of interest or not.

Once it confirmed, the DNA band size obtained after the amplification is given into the table below, 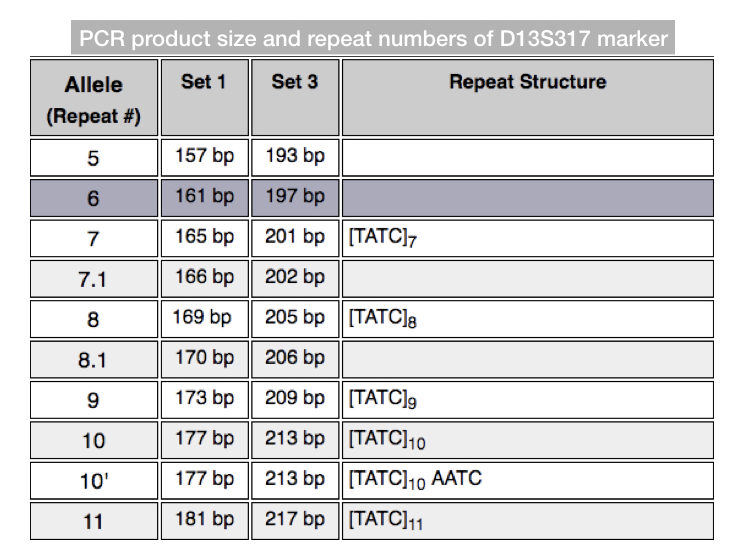 Note: Focus only on the set-1 primer results because set-3 primers are not given into the above list.

The band size with their repeat number is given into the table or we can calculate the repeat number by doing some simple calculations.

However, now the state of the art instrumentation set up for the DNA testing do the repeat calculation exactly.

Also, the repeat numbers can be calculated in the capillary electrophoresis system which is one of the most popular and trusted instruments in the field of DNA fingerprinting.

Once you prepared the primers for STR, prepare a PCR reaction and set the PCR protocol as given into the table below,(Don’t know how to prepare the PCR reaction properly? read our previous article having information on how to PCR reaction preparation: PCR reaction: Ten secrets that nobody tells you).

PCR protocol set up for the STR markers:

Once you have completed the PCR reaction, perform agarose gel electrophoresis for result and interpretation.

How to analyse the results of STR-PCR?

Prepare ideal 2% agarose gel for the PCR product, in the case of STRs (with the fragment size ranging between 100 to 200bp) preparing a 3% gel will give sharp bands that can be easily distinguishable.

Results of random individuals (we are selected during our study) are given into the figure below,

In the above figure, we can clearly notice diversity in the band size, the DNA band size of different repeats vary in different individuals.

The agarose gel electrophoresis method is not advisable of DNA fingerprinting and forensic DNA analysis because it can not differentiate minor basepair changes.

Capillary gel electrophoresis or PAGE can be used to do so.

However, the agarose gel electrophoresis can be used for checking maternal cell contamination and parental verification.

See the gel image given below, 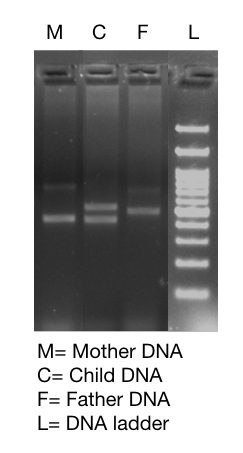 Sample running, detection and analysis three function are collectively performed by the CE itself. Also, it is available in semi-automated as well as automated formate.

In the semi-automated machine, the sample, gel and buffer are filled into the instrument, the machine automatically fills the capillary with gel and load samples on it.

The amount of fluorescent emitted from the PCR amplicon is reported and represented in the form of the graph.

How to calculate the repeat number of STR?

for instance, suppose our STR has the tetranucleotide repeats of “AGAC” and approximate repeat numbers are 30.

If we selected a primer having 50 basepairs flanking regions from both the side of STR, hence our DNA band size will be between 124bp to 220bp.

Hence if only 6 repeats present, the total band size is,

If 30 repeats are present,

Our PCR products for this STR are ranging from 124bp to 220bp.

Or you can use another method that I will discuss with you in our upcoming course on DNA fingerprinting.

The STR-based DNA testing is used for

Read our previous article related to this topic:

Using STRs along with the VNTRs in DNA testing increases the accuracy of results. However, the agarose gel electrophoresis is not a reliable method for sensitive analysis such as criminal verification and crime investigation.

The capillary electrophoresis method is one of the best method adopted for the DNA fingerprinting using STRs.

If you want to learn more on DNA fingerprinting and STR-PCR wait for our upcoming course.