The transposons are jumping genetic elements that can move between DNA sequences and it is believed to be involved in the process of evolution.

The transposable elements are discovered by the B. McClintock in 1950s while the molecular structure of it revealed after two decades of its discovery.

In the previous articles of this series, we had discussed a brief about the transposons and the role of transposase in the antibiotic resistance. Read the articles here,

In the present article of this series, we are going to discuss some more point on transposons. Here we will study some of the most common types of TE in different eukaryotes and their structure. The present article is more focused and contains information regarding the theoretical understanding.

Let’s start the topic with the general structure of transposons.

Remember, the general structure what we are discussing here is not necessarily relevant for all types of transposons. It is just an overview and rough idea about what the transposon is made up of.

The general structure of transposons:

The ideal transposon is made up of

The TRs are mostly identical on both the ends yet, not similar to each other. They are in the same orientation, opposite orientation or oriented towards each other.

The IS50 element of bacteria is inverted in towards each other whereas the terminal repeats of Yeast TY element are oriented in the same direction.

The main body of the transposons between the terminal inverted repeats contains different genes. One of the most common genes presents nearly in all transposons is the gene for transposase.

The transposase gene facilitates the transposition of each element between different DNA sequence.

Besides this several other genes may present in the main body of the transposons.

For example, the bacteria transposon comprises a resolvase gene that controls the process of transposition by suppressing the activity of transposase.

Also, it has some of the antibiotic genes too which assists resistance against selected antibiotics.

The retrotransposon contains a gene for the reverse transcriptase that benefits the RNA mediated DNA transposition.

In most of the transposons, the host DNA is present on both sides of the terminal repeats. With the help of the target site duplication, the host DNA is duplicated and inserted into both the side of TE.

The host DNA may or may not inserted during the new DNA transposition process.

This is the general outline of a structure of transposons. Conclusively we can say that the transposon has the terminal repeats, the Target site duplication and the main gene body having the transposase gene.

Now take a look at some of the examples of transposons:

15% of the Drosophila genome is made up of the mobile genetic elements of retrotransposons and P elements.

The size of the P element varies from organism to organisms in which the largest P element is 2907 nucleotide pair long. The P elements of Drosophila are autonomous mobile elements contains 31 np long terminal inverted repeats and 8 nucleotides pair of the target site duplication. 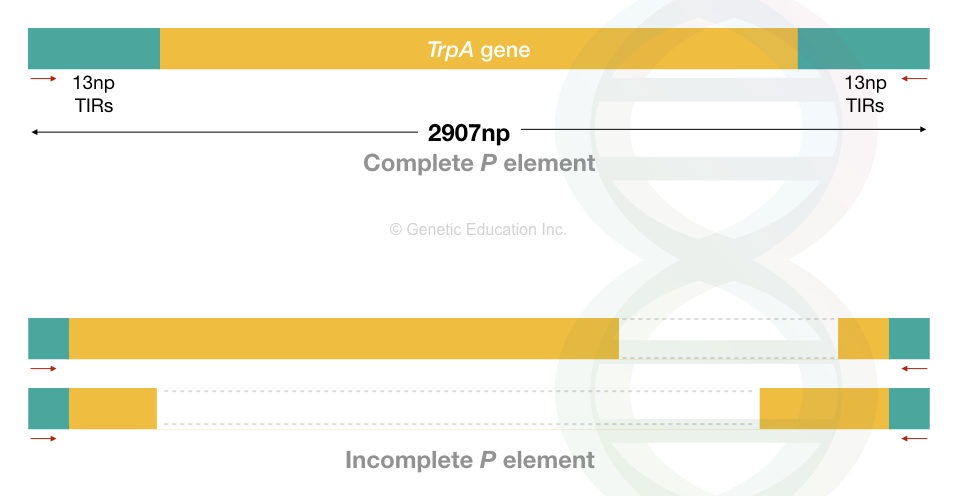 Interestingly, the P elements vary between the members of Drosophila and the reason behind that, is the lack of transposase and terminal repeats in some P elements.

They are DNA transposons hence are class II transposons that follow the “cut and paste” mechanism for transposition.

It contains 4 exons and 3 introns in which the complete splicing produces the transposase while the alternative splicing of exons produced repressor.

P-M hybrid dysgenesis is an important mechanism in the Drosophila transposition.

Read some of the interesting articles:

What is P-M hybrid dysgenesis?

The P cytotype a maternally inherited property of the P element which regulates the movement of the transposition of it.

On the other side, the flies which does not have these inherited properties are called the M cytotype. The hybrid dysgenesis is shown in the figure below,

When the P element carrying female is crossed with the M cytotype (male without P elements), the resulting offsprings are wild type P cytotype and non-dysgenic. The P element transposition is suppressed.

Contrary, when the Male having the P element crossed with the female without the P elements, the resulting offsprings are M cytotype hybrids that possess the transposition activity.

It can move into the genome, creates new mutations and produces novel dynamic phenotype into the offsprings.

From the above explanation, it is concluded that the P element also encodes for the suppressor gene which accumulates into the cytoplasm of it and inherited maternally.

The mechanism is known as P-M hybrid dysgenesis.

One of the shocking facts came in light after experimenting on the P elements of  Drosophila that,

None of the flies carries P elements before 1950. That clearly indicates that the P elements are evolved naturally through the process of natural selection.

Scientist believes that the P element is introduced into the Drosophila through the viruses that naturally infect them. However, it is just a postulation, the specific reason behind it is still not known.

Additionally, only the D. melanogaster does not have the elements, they preserved the native condition while other distantly related species of it contains the P element.

The P elements of Drosophila are an excellent tool for creating mutations. By modifying the P elements with, it can be utilized to insert a gene of interest. Also, it is used in inactivation of gene or creation of loss of function mutation by introducing some of the sequences to the functional gene.

By doing these new variations into the Drosophila can be induced and characterised.

The majority of the transposons in the Drosophila are retrovirus-like elements called retrotransposons.

It is structurally similar to the retrovirus and TY elements of yeast. The class I TE in Drosophila are ranging from 5kb to 15kb with long terminal repeats oriented in the same direction.

On both flanking terminal repeat, the retrotransposons contain the target site duplication sequences.

largely, the TEs in class I Drosophila divided into two families: copia and gypsy. However, the number of retrotransposons present in it are still unclear. 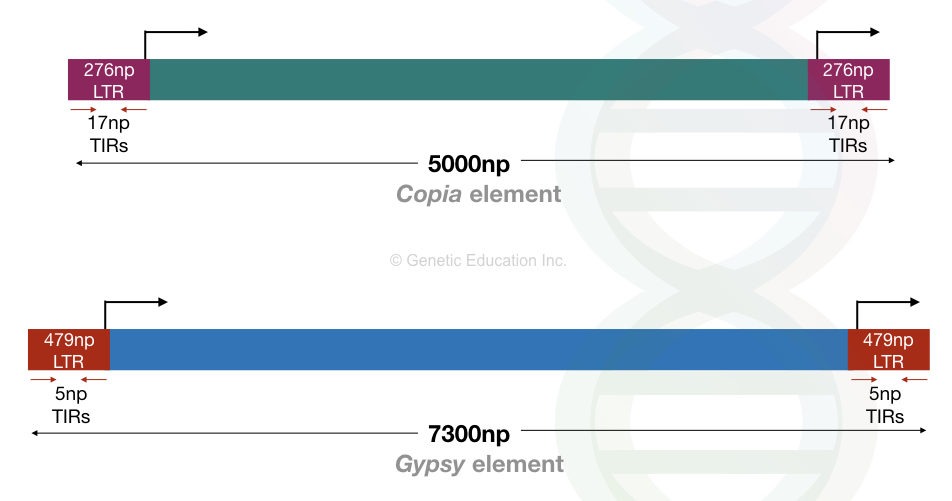 In both the families, the target site duplication sequences are oriented in the same direction.

The retrotransposons in Drosophila follows the RNA mediated transposition.

The RNA is formed from the DNA and by the reverse transcription, the DNA is composed back from the RNA  and inserted into a new location.

Hence besides the transposase gene, the gypsy and copia elements also comprise a gene for reverse transcription.

The transposons were first found in the Maize by B. McClintock named as Ac/Ds transposons. 80% of the Maize genome is made up of the mobile genetic elements.

Two of the most common transposons are Ac/Ds and Spm/dSpm elements.

The Ac element of the Ac/Ds system is an activator, functionally autonomous genetic elements.

It also contains 11 nucleotide pairs of terminal inverted repeats which are thought to be responsible for the transposition of Ac element. Sequence heterogeneity is reported in the Ac element.

The Ac elements are interspersed, present throughout the genome and are structurally similar but not identical.

The dissociator elements are different from the Ac elements.

The aberrant Ds element does not contain any gene sequences. See the figure below, 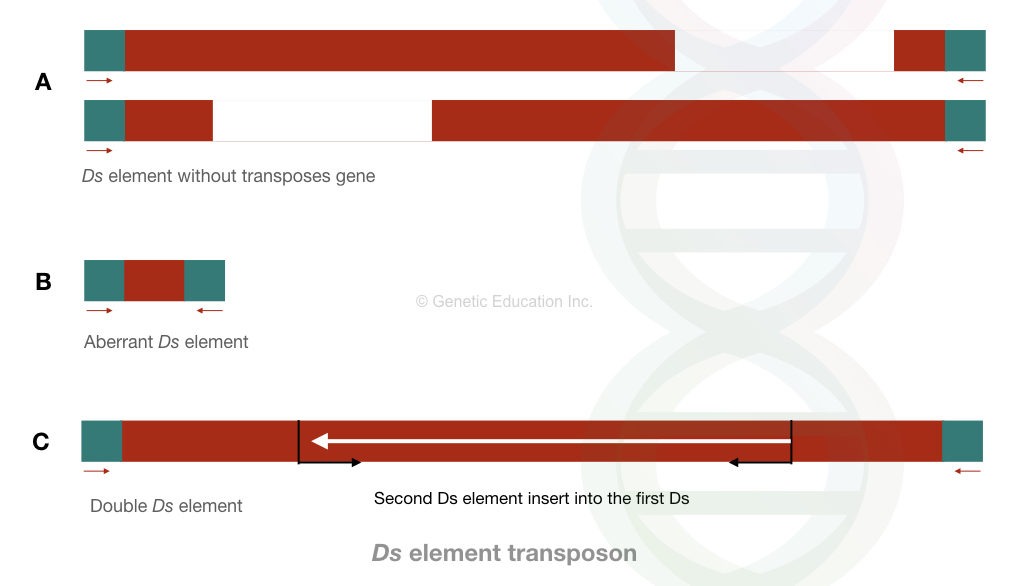 Another class of Ds elements contains some of the terminal and subterminal repeats of Ac elements, Although they do not have their own.

The third type of Ds element called a double Ds element in which the second Ds element inserted within the first Ds (see the above figure). However, the insert is in invert orientation.

Interestingly, the double Ds type of Ds elements is responsible for the chromosomal breakage, which was reported by McClintock.

The activator contains a transposase encoded gene that helps the Ac element to move in different positions.

Any mutation in the transposase gene results in the inactivation of Ac elements that ultimately immobilize the Ds element.

This mutational study indicates that the Ds elements cannot activate themselves.

Interestingly, the actual transposition of Ac elements is nonreplicative. It does not replicate itself rather it is copied by the normal replication process of the organism.

The Ac elements excise from its original position and immobilize nearby it, the normal replicative mechanism fills the gap by the complementary nucleotides and a new Ac element is generated.

After the discovery of the Ac/Ds elements by B. McClintock, the transposon system is sequenced by Federoff et al. in 1983 by inserting it into the Wx1 gene.

The Ac/Ds transposon system is further reported in some other plant species such as Rice, Arabidopsis and Tobacco.

They also have the 3 nucleotide pair of target site duplication when inserted into another location on a chromosome. 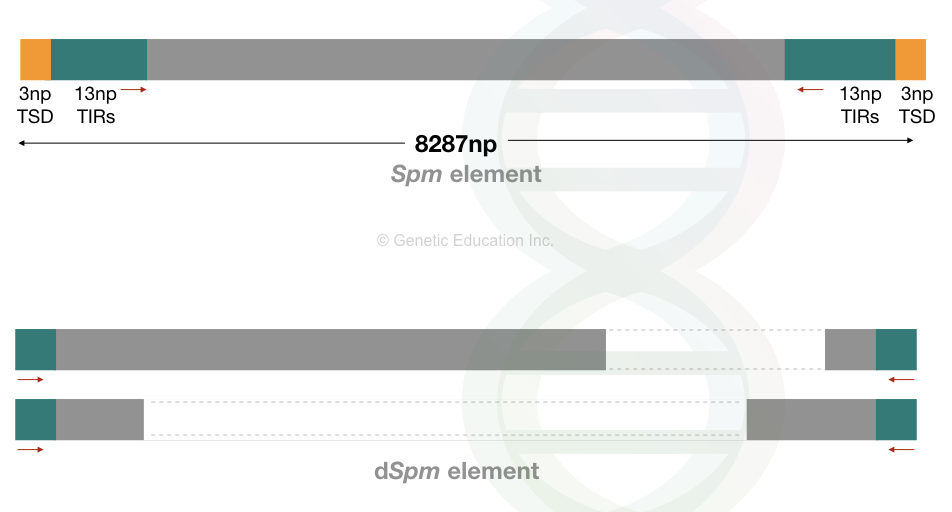 Contrary, the dSpm are unable to move because of the deleted sequences of the functional transposase gene.

When the dSpm and Spm elements interact with each other, both collectively suppress the activity of the inserted gene.

In fact, the Spm element itself is a suppressor of the transposons, which also suppress the activity of the dSpm when interacting with it.

The activity of the Ac elements and Spm element are epigenetically controlled.

Likewise the human transposons, it is now known that the TY elements of yeast are actually retrotransposons.

The element contains 5 nucleotide long target site duplication of TA rich region, indicating that the TY transposons are inserted into the AT-rich region of the DNA.

35 copies of TY elements are present into the single yeast genome.

The TyA and TyB genes are the same as the gag and pol gene of the retrovirus. The TY transposon element mediates transposition via the RNA intermediate.

Once the DNA is formed, it is inserted in some other location within a genome.

The recombination between the complete TY elements generates the solo ? sequences, The LTR of it are detached from the TY.

As shown in the figure above, the recombination between the ? site of the transposons generates one single “solo ?” and circular sequence as a by-product. The significance of this circular DNA is still unknown.

It is now known that the TY elements can generate mutation through the insertion into the functional gene.

Due to the presence of the TyA and TyB gene, it is believed that the TY elements are originated from the primitive retroviruses.

The detail information on LINEs, SINEs and LTR- like retrotransposons are given into the previous article Transposons: A Jumping Entity and a Foe with Benefits,  you can read it for getting more information.

Transposons are one of the most challenging topics in genetic nowadays, with so many opportunities. You can read more by using these external references and can contribute to transposons research.

Some of the external resources:

Transposons are one of the important element in evolution. They are capable of creating new variation by interfering with the normal gene function.

The transposons are the major game changer in the field of plant genetics. However, most of the TEs are inactive in the humans and other higher eukaryotes.

They are epigenetically silent since long.