More specifically, it is adopted to detect the known SNPs (single nucleotide polymorphism), however, we cannot identify new mutations by ARMS-PCR.

Kary Mullis described the technique of in vitro amplification in the year 1983. After a few years of the discovery of the actual PCR technique, C. R. Newton and coworkers discovered the ARMS-PCR or allele-specific PCR technique.

The technique is majorly used for the genotyping of the single nucleotide polymorphism with the help of the refractory primers.

In this article, we will understand the allele-specific PCR/ ARMS-PCR and its importance in medical science.

Further, we will explain the mechanism of how we can develop different primers for allele-specific PCR.

Before going to the actual process lets first understand the terms “Allele-specific PCR” and “ARMS-PCR.”

What is allele-specific PCR?

The term suggests that the technique used in this type of PCR is specific to the particular type of allele. An allele is the alternative form of a gene.

If one allele has an SNP and the other alternative form is normal, we can analyse both the alleles by designing specific primers for each allele.

The allele-specific PCR is also called as the (amplification refractory mutation system) ARMS-PCR because of the use of two different primers for two different alleles.

Here the word “refractory” is very important (Refractory= resistant to something).

That is why it is called an amplification refractory mutation system. The name ARMS-PCR is given by its actual developer C. R. Newton.

The principle of allele-specific ARMS-PCR:

The mechanism of the ARMS PCR is based on the modification of the primers for different alleles.

The concept of mismatch:

Here the mismatch between the primer and the template DNA plays a crucial role in achieving the amplification.

Introduction of a mismatch at the 3’ end of the primer alters the annealing temperature for that particular allele. 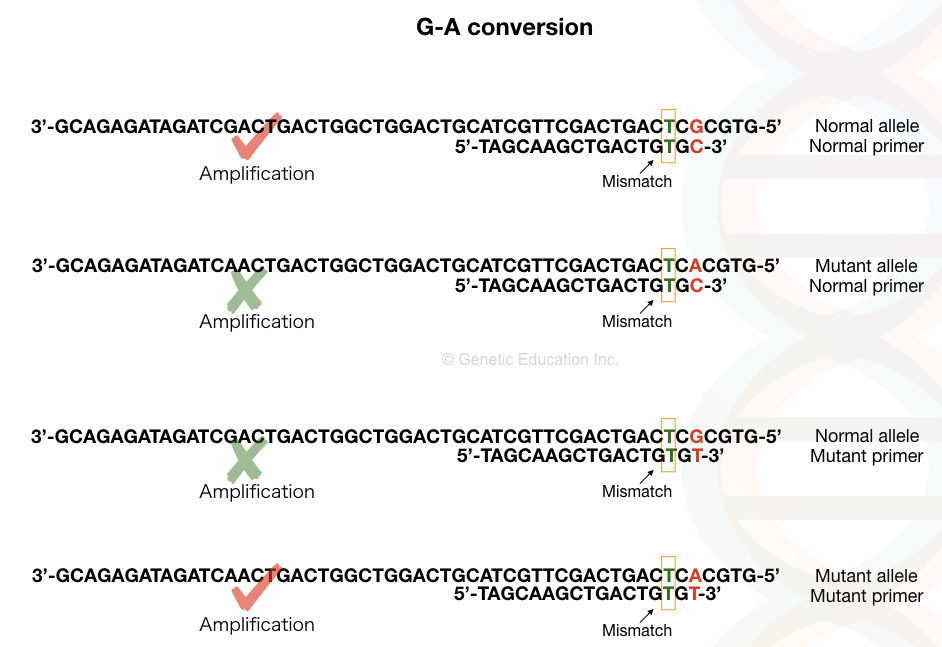 Due to the absence of the exonuclease activity of Taq DNA polymerase, the mismatch cannot be repaired. Why high fidelity Taq DNA polymerase does not use in the ARMS PCR? we will answer this question in the last section of this article.

The process of the ARMS PCR is simple and very effective. No harmful radiolabelling is involved in the ARMS allele-specific PCR.

The procedure of ARMS PCR is divided into 4 steps:

The primer must be allele-specific.

There are several points we have to understand while designing a primer for the ARMS-PCR.

Suppose our DNA sequence has G-A point mutation viz, G in normal allele and A in place of G in the mutant allele.

We have to design a forward primer in such a manner that for normal allele the primer contains C (complementary to G) at 3’ end and the mutant primer contains T in place of C.

The magic of the present technique has happened when we add a mismatch base near to our SNP at the 3’ end.

Why we have to add mismatch?

The mismatch is the key factor in achieving the amplification. If the mismatch is weak the chance of amplification is higher. Add strong mismatch near the 3’ end of the primer (at -2 position ideally) hence, in the non-complementary allele it can not bind to the DNA sequences and therefore terminates amplification.

C:T, G:A and A:G are the strong mismatch base pairs which reduce the amplification process up to 100 fold.

The primer length of the allele-specific primer must be between 20 to 30 nucleotides.

The concentration of the PCR components is given into the table below, 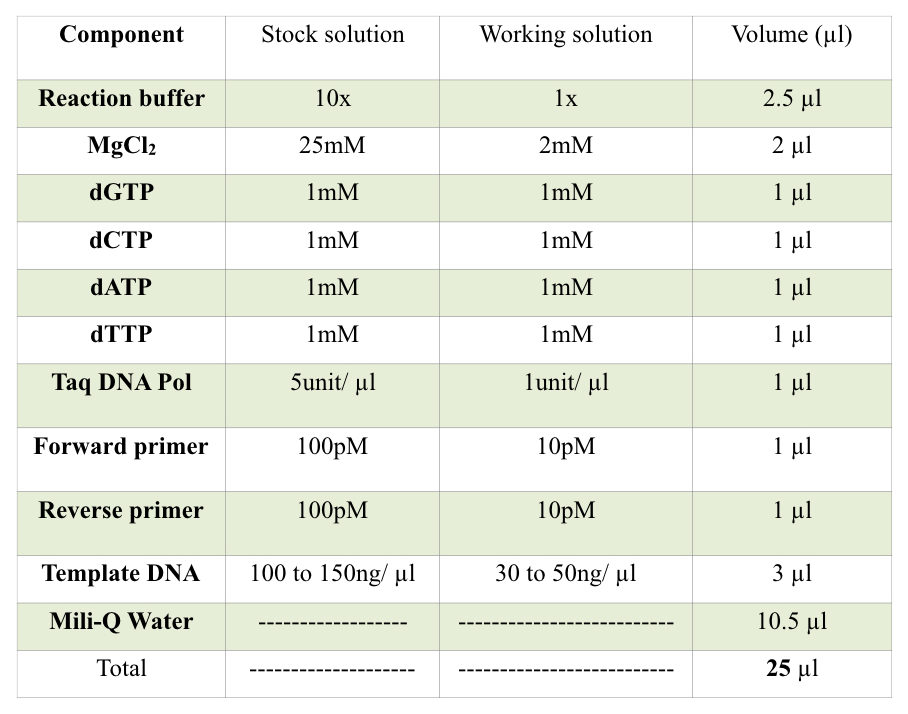 Importantly, the PCR cycles for ARMS-PCR are lower than the normal PCR reaction. Set a PCR cycle between 22 to 25 but not 35. As the PCR cycles increase the chance of false-positive results increases.

“An additional mismatch to the 3’ end after the first mismatch increases the specificity of the ARMS-PCR reaction.”

Here in the ARMS PCR, the internal control plays a crucial role, it facilitates additional accuracy in the allele-specific PCR by reducing the chance of the false-positive results.

The beauty of the ARMS PCR is that it does not require any hybridization steps. Which will make this technique more suitable and more reliable for the diagnosis.

The amplified fragments are directly loaded on the 2% agarose gel for getting the results. The samples are loaded sequentially on the agarose gel and run for 45 minutes.

Now analyse each band in normal as well as in mutant allele. The graphical representation of the agarose gel electrophoresis results are shown in the figure below,

Suppose we have three samples one normal, one heterozygous carrier and one homozygous dominant.

We have prepared 2 tubes for each sample, a total of 6 tubes with one positive control and two negative control. 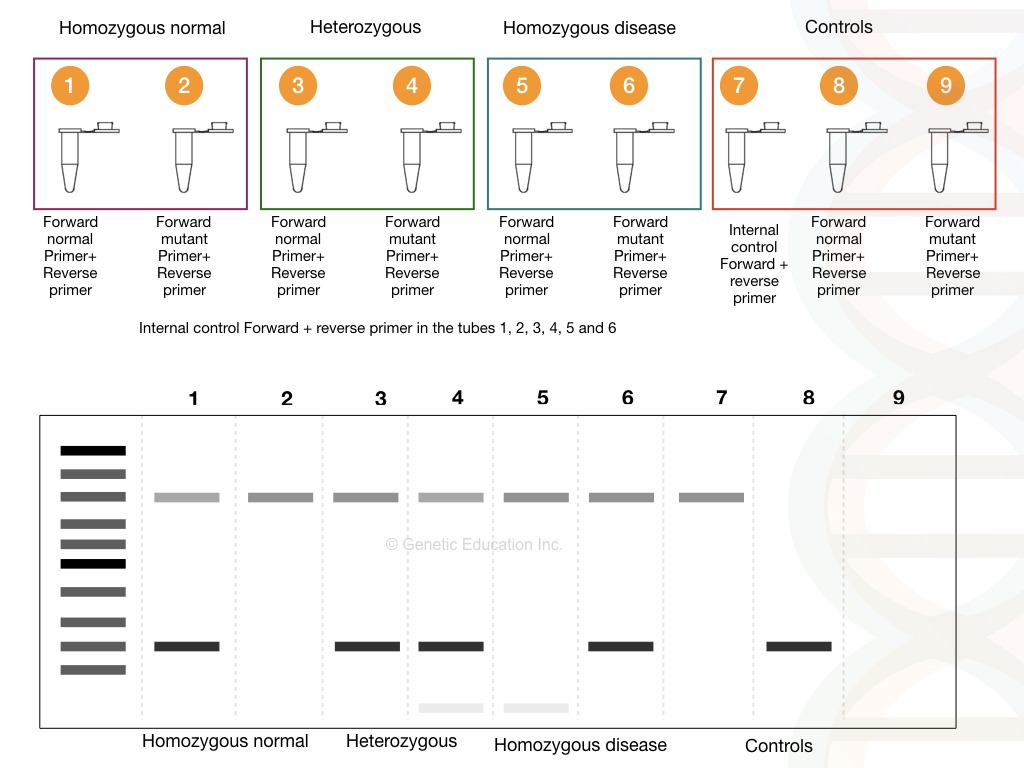 Read some of the interesting articles,

Importance of ARMS-PCR in the diagnosis of genetic disease:

The ARMS PCR is one of the important tools in the genetic disease diagnosis in recent days. The restriction digestion method is not 100% accurate and also, not all the sequences have the restriction site.

Therefore, restriction digestion is not applicable in all types of mutation or polymorphism.

The allele-specific PCR is an accurate method for single-gene disorders having the SNPs. It is also a gold standard method for Sickle cell anaemia and thalassemia like inherited disorder.

Also, it is applicable in mutation detection of  JAK2 and HIV. Commercial kits are now available for the different range of disorders such as HbS and JAK2 gene SNPs detection kits.

The pioneers C.R.Newton and coworkers used this technique for the ATT gene deficiency SNP analysis. Click here for the research paper.

The advantage of ARMS PCR:

Now answer to our question, Why high fidelity Taq DNA polymerase does not use in the ARMS PCR?

The high fidelity Taq DNA polymerase has the 3′ to 5′ exonuclease activity which removes the mismatch bases. that is why it is not used in the ARMS-PCR.

The ARMS-PCR method is popular for the detection of known SNPs, however, it is a very tedious and time-consuming process to encounter more SNPs at once. Because it is allele-specific, the accuracy of ARMS-PCR is higher.

Some of the deletions can also be screened using ARMS-PCR method.

What is immuno-PCR or IPCR?

What is a multiplex PCR?