A gene is an inheritance unit of us while the allele is an alternative form of it.

Confused? Don’t worry after reading this article your fundamentals of genetics and related terminologies become stronger and your concept of gene vs allele becomes more clear.

So let’s start with some basics,

Genes are the functional part of the DNA- a polynucleotide chain.

DNA is made up of the phosphate, sugar and bases, the bases are nitrogenous mainly purines and pyrimidines. Two single-stranded DNA joined together by the hydrogen bonds (three between G and C and two between A and C) and arranged spirally, see the image below.

There are two types of DNA present in our genome. The coding sequences make proteins that are 3% portion while the non-coding sequences are just junk and can’t form proteins. It covers around 97% portion of a genome and functionally it regulates gene expression.

Those coding sequences are our genes.

If you want to learn more about genes and DNA please read our previous article: DNA vs Gene.

The elaborated definition of a gene is as stated,

“A gene is a polynucleotide chain of DNA- a functional portion- having introns and exons, encodes protein or group of proteins via mRNA transcript.”

On the other side, the alleles are the alternative forms of a gene.

The alternative forms are two or more than two, for example, the OCA2 gene is located on chromosome number 15 and plays an important role in the development of eye color along with HERC2 gene.

Therefore, the eye color is developed from the activity of the OCA2 gene while various shades of it like a blue eye, black eye, and red eye are developed by different alleles of it.

Mutation- a small variation in a sequence of DNA is the reason to originate different alleles for a gene. Related article: Different Types Of Genetic Mutations.

Though more than two alleles can be possible for one gene, alleles can only be inherited in a pair.

Thus, we can say, genes are inherited as a single entity while alleles in a pair.

We will take the example of the OCA2 gene for eye color with us throughout the article.

For example, the OCA2 gene is responsible for the production of eye color traits while blue eye, red eye, black eye, are variation occurs due to different alleles. 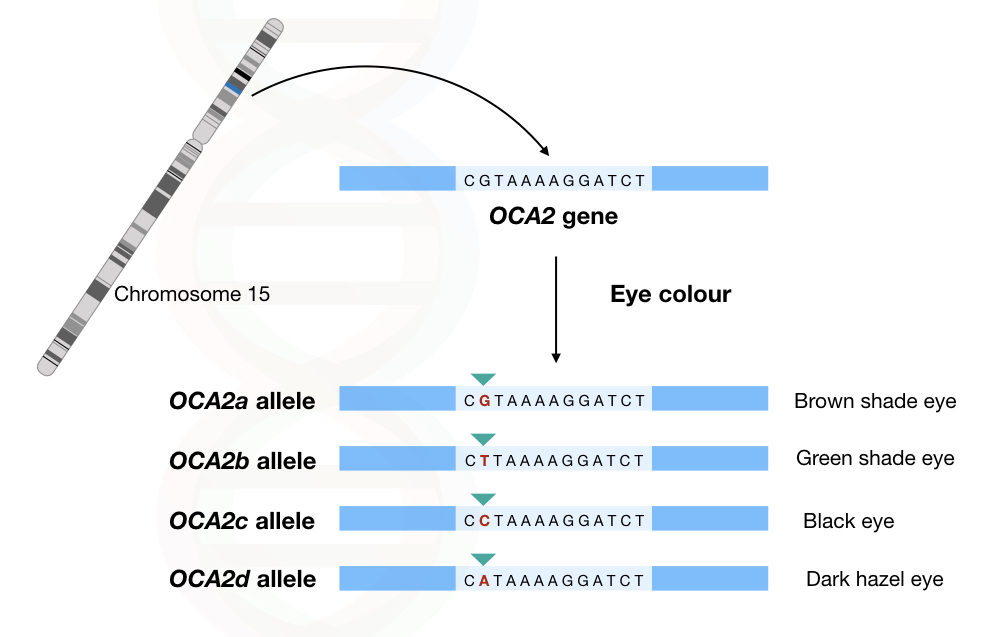 An example of the OCA2 gene which encodes for eye color.

Some other examples of gene and alleles are,

A gene comprises two different alleles while the allele can be either dominant or recessive.

If one dominant and one recessive allele inherited together the condition is known as heterozygous.

OCA2 is a gene for eye color and OCA2a, OCA2b, OCA2c and OCA2d are different alleles for different shades of eye color.

Once the gene OCA2 inherited with the two OCA2a alleles (OCA2a/OCA2a), it is called a homozygous dominant condition that inherited the brown-eye trait in the offspring.

On the other side, the OCA2b allele is for green eyes, when the OCA2 gene carries two OCA2b/OCA2b alleles it inherited the green eye trait called autosomal recessive condition.

But when both the allele OCA2a and OCA2b are inherited together, it inherits the only brown eye trait (OCA2a/OCA2b) called heterozygous dominant alleles.

These are the alternative forms of the gene OCA2. Now you understand the difference between gene vs allele.

Genes are located on the chromosome and so the alleles are!

However, the dominant effect of the alleles are totally unknown, it depends on the environmental and other factors, that, which allele becomes dominant and which becomes recessive.

A phenotype type is an observable form of the trait governed by different alleles, different phenotypes of a particular trait originate due to different combinations of alleles.

While the genetic constitution related to the phenotype or trait is called genotype which creates a gene for a trait. You can read our article on Genotype vs phenotype here.

Another difference between gene vs allele is the prevalence,

On the other side, not all the alleles are present in all organisms, for example, the blue eye allele is present in one particular population but not in others.

Let’s understand it by taking an example, the TRS gene encodes a protein called tyrosinase which is majorly responsible for the human skin color.

(this is just an example, not the exact mechanism)

Homozygous dominant alleles TRS1/TRS1 produces a dark skin phenotype which is very essential for the population living in the high-temperature area.

While the homozygous recessive alleles TRS2/TRS2 produce a fair skin color commonly observed in the population living in the lower temperature areas.

Summary of the article:

Allelic variation is required for the origin of new phenotype and thus for survival of us. Over a period of time, different genes mutate under different environmental conditions, and new alleles are created.

Nature creates new variations in genes, different alleles are originated and unwanted alleles are eliminated. Each new allele gives a new power to us for survival, after all, the aim of doing all this is to survive on earth.

DNA vs Gene: A Comparison For Beginners

What Is A Point Mutation?