“The microRNA often abbreviated as miRNA is made up of 20 to 25 nucleotide short stretch of the single-stranded hairpin RNA, involved in the genetic regulation.”

Different ribonucleic acids, RNAs perform different functions in a cell, however, the main three types of RNA; mRNA, rRNA and tRNA are implicated in the translation and thus gene expression.

Interestingly some genes can transcribe into RNA, but can not undergo translation such types of RNAs are involved in the regulation of gene expression.

Through the process called RNA interference or RNAi, these short RNAs suppress the translation or cleave the mRNA.

In the present article, we will discuss this special class of small RNA molecules involved in the RNAi, called the miRNA. The content of the article is

Common abbreviations used in this article:

The miRNA or microRNA are small naturally occurring molecules (22 to 25 nucleotides long) implicated in the gene regulation.

These are the conserve sequences present in all the eukaryotes since evolution, although some miRNAs are also found in viruses too.

In 1993, Lee et al., discovered the first miRNA in nematodes during the genetic screening.

At that time, it was believed that the miRNA was only present in the nematodes.

Lee and co-workers were observed that the lin-4 gene could transcribe into mRNA but could not be translated into protein, instead, it transcribe a short RNA molecule of 22 to 60 nucleotides long undergo the regulation of lin-14 gene by the mechanism called antisense RNA.

The numbers of different miRNA in a different organism are enlisted below,

The complete set of the miRNA database is present online in the “miRBase” database.

The majority of the miRNAs are conserved since evolution and are located in the intergenic regions, while a few are present in the intronic or exonic regions.

Interestingly, some of the miRNAs are present in a cluster located very close to one another and are expressed as poly-cistronic primary transcripts.

Although some miRNAs have their own promoters and are transcribed independently called the mono-cistronic primary transcript.

Four different types of miRNA are present in the genome of eukaryotes based on their location and function:

The function of miRNA:

The miRNA functions as translational repression by degrading the protein-coding mRNA thus regulates the gene expression.

The miRNA often called a smaller RNA is further involved in the regulation of numerous metabolic pathways such as lipid metabolism, immune system, cell proliferation and apoptosis, neuronal patterning and hematopoietic cells differentiation, also in plants, it is involved in leaf and flower development.

Using state-of-the-art sequencing methods, computational tools and bioinformatics algorithms, thousands of different miRNA and their function in gene regulation are now known to us.

As we stated above, the miRNA is involved in a variety of biological regulatory functions in animals and other eukaryotes.

Some of the human miRNA and their function are enlisted below,

The processing of the miRNA is somehow similar to the siRNA or the shRNA, the process of the miRNA maturation and its action in translation repression completes in the nucleus as well as in the cytoplasm.

Processing in the nucleus:

The pre-miRNA transcript is first formed in the nucleus by the transcription.

The RNA pol II or RNA pol III mediated transcribed product is known as the pri-miRNA or primary-miRNA which is several kb in length having a hairpin-like stem-loop-like structure.

The Drosha in conjugation with the DGCR8 or Pash forms a large microprocessor complex which cleaves the Pol II transcribed pri-miRNA hairpin at the junction of loop and stem.

The precursor miRNA hairpin is formed by this large microprocessor complex.

Two different RNase III enzymes involved in the process of maturation of miRNA, first, the Drosha binds to pri-miRNA(primary miRNA) and creates the precursor miRNA.

The Drosha cleaves the dsRNA hairpin duplex and generates the 5’ phosphate and 2 nucleotide overhang at the 3’ OH end (as like the siRNA).

These precursor-miRNA transfer to the cytoplasm by the protein called the transportin 5 and in the cytoplasm, it is converted into the mature miRNA or miRNA by another RNase III called the Dicer.

Processing in the cytoplasm:

Now the pre-miRNA is transported through the nuclear pores to the cytoplasm using the exportin5, the EXP5 or exportin 5 is a RanGTP-dependent nuclear transport receptor protein.

The cytoplasmic RNase III dicer processed the pre-miRNA and generates the mature miRNA.

A highly conserved protein Dicer is a specific type of nuclease that cleaves the pre-miRNA exactly at 22 nucleotides and generates a mature miRNA duplex.

After that, the mature miRNA is loaded on the Argonaute protein that forms a complex in combination with some other proteins which helps in the gene silencing called the RISC, RNA induced silencing complex.

Now, one of the strands of the dsRNA called the passenger strand is degraded by the RISC and the guided strand will be loaded on the Ago protein of the RISC.

The RISC is a ribonucleoprotein complex having the miRNA guided strand, Dicer, argonaute protein and other proteins create the primary complex often known as the miRISC. Besides these major proteins several other proteins in the RISC are:

The argonaute protein is one of the main functional parts of the RNA induced silencing complex having three different domains:

The human genome has a gene for eight different argonaute proteins.

The structure of the argonaute protein and RISC is given in the figure below,

Interestingly, the process of miRNA maturation is slightly different in plants.

The maturation of miRNA occurs only in the nucleus, instead of the dicer, the dicer-like 1 protein called DCL-1 mediates the miRNA maturation.

Furthermore, instead of exportin, the HASTY (HST) mediates the transportation of mature miRNA from the nucleus to the cytoplasm.

However, the miRNA loading in the Ago protein of RISC occurs either in the nucleus or cytoplasm.

In plants, the miRNAs are not clustered and thus not transcribed from a single promoter, each miRNA has its own machinery of transcription also, the miRNA processed in the plants has the 5’ cap and the poly-A tail like the mature mRNA.

Furthermore, the loop of the hairpin of the miRNA of plants is larger than the miRNAs of other eukaryotes.

Some of the plant miRNAs have different isoforms too.

In the last step, the miRNA containing RISC mediates the silencing of gene expression. This can be done using one of the two mechanisms postulated:

[epcl_box type=”information”]Studies suggest that multiple copies of miRNA binding sites are located on the 3’ untranslated regions of the mRNA. [/epcl_box]

The general mechanism of the miRNA-mediated gene silencing is based on the complementarity of the miRNA and mRNA.

If the ss-miRNA is highly complementary to the target mRNA, the Ago protein cleaves or slice the mRNA and do the gene silencing,

If mismatches are present between the miRNA and mRNA, instead of the cleavage, it induces the translational repression by only binding with the mRNA.

The mRNA degradation mediated by the RISC is subsequently followed by the decapping of the 5’ end, deadenylation and exonuclease digestion.

Despite this, there are other pathways of miRNA regulation that occur in nature.

For example, instead of the 3’ UTR, the miRNA binds to the 5’ UTR and regulates the gene expression.

In some other mechanism, one particular miRNA regulates other smaller RNA species or other miRNA maturation.

One theory suggests that the miRNA induces the poly-A tail shortening and represses the mRNA translation while in some other mechanism the ribosome translates the mRNA into protein less efficiently.

In short, in any of the mechanisms stated above, the main goal of the miRNA is to prevent protein formation thus preventing gene expression.

Conclusively, different mechanisms and pathways are postulated by different scientists for mRNA degradation as well as translational repression, notwithstanding, the exact mechanism is neither clear nor understood well for both.

The entire process of miRNA maturation, processing and gene regulation through mRNA degradation as well as translational suppression is shown in the figure below, 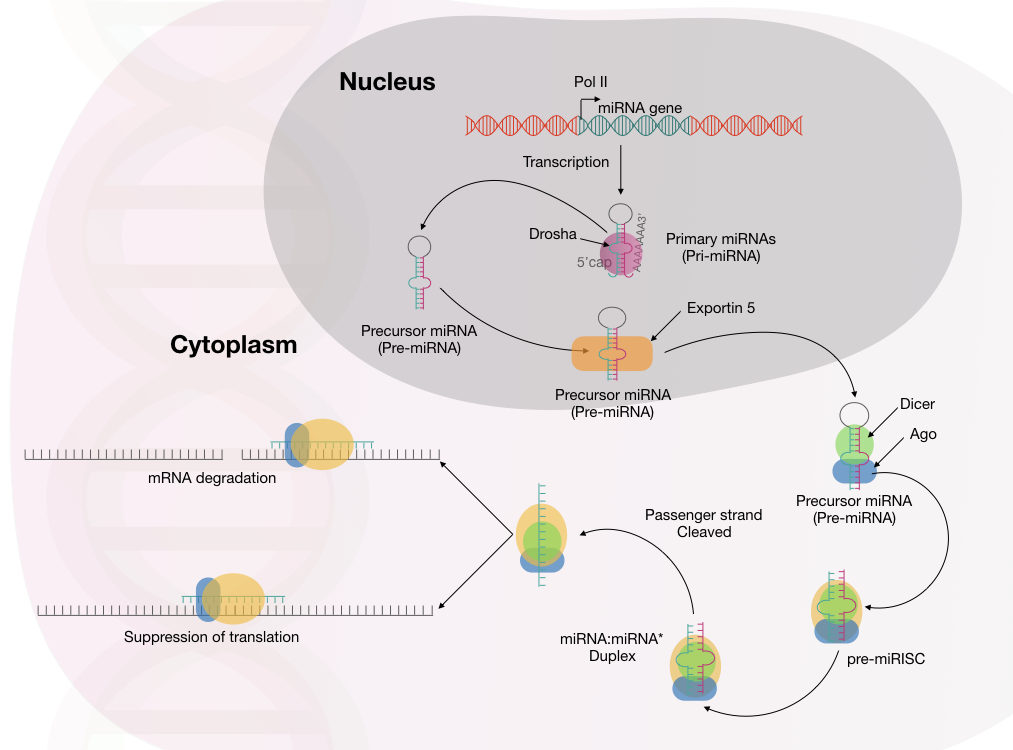 It is very important to destroy the miRNA once its function is done because a single miRNA has so many other mRNA targets and hence unintentionally it may cleave or silence other mRNAs too.

Unbalanced gene expression can be caused by the unwanted activity of the miRNA thus it needs to be cleaved or destroyed once its function is done.

Small RNA degrading nucleases, exoribonuclease and other endo and exonuclease deactivates the miRNA by cleaving it.

Some nucleases have 5’ to 3’ activity (exoribonuclease) while some have 3’ to 5’ activity (SRDN- smaller RNA degrading nuclease).

In addition to this, dysregulation of miRNA activity also causes disease conditions, any mutation or non-function of the miRNA results in the downregulation or upregulation of related protein and thus results in abnormal phenotypes.

Obesity, some nervous system disease, kidney disease, heart, cardiovascular disease and cancer are some of the common types of disease associated with the abnormal miRNA.

As the miRNA is a naturally occurring molecule, its normal function can be restored by the therapy called “miRNA replacement therapy”.

Using this method, the normal function of the miRNA can be restored in a particular tissue.

Alike the normal miRNA, a synthetic miRNA is introduced in the affected tissues for restoring the normal function.

Also, the miRNA can be used to suppress the overproduction of protein in some conditions.

These miRNA mimetics and miRNA inhibitors can be used in cancer research, neurological disorders, viral infections and cardiovascular diseases as a therapy to inhibit the effect of the harmful gene or uncontrolled gene expression.

The miRNA might become a biomarker in diagnosis, prognosis and targeted gene therapy in the future.

The mature miRNA is a single-stranded (but present in a hairpin-like duplex) and 22 to 25 nucleotide long, however, in the primary transcript stage, it is >1000nt long and in the precursor miRNA stage it is 60 to 100 nucleotides long due to the cleavage by the dicer.

The guided RNA strand is present in a higher amount and often known as miR while the passenger strand is sometimes known as miR*.

Here the 5p indicates the 5 prime ends of the miRNA.

The hsa indicates the presence of the miRNA in the species, here hsa means homo sapience.

This indicates that the miRNA is mature, firstly.

Secondly, the number “1” and “2” indicates that the miRNA sequences are the same but are transcribed from different genes (1 for gene one and 2 for gene two).

The XX is the unique number of the finding of miRNA.

Similarly, for muse, it is denoted as mmu-miR-XX for the guided strand and mmu-miR-XX* for the passenger strand.

An interesting point to discuss:

Remember the shRNA from our previous article?

The shRNA, small hairpin RNAs are synthetic RNA molecules used for gene silencing. The shRNA mimic like the pre-miRNA (precursor miRNA) and processed alike miRNA, cleaved by the Drosha and functions like the miRNA.

Once it is cleaved off, two single-stranded RNA duplex generated in which one is guided RNA guides the RISC for the gene silencing or mRNA degradation.

Read more on shRNA: What Is shRNA (Short-hairpin RNA)?

Some information on miRNA:

Over 60% of human coding genes are regulated by the miRNA-mediated pathways.

40% of miRNAs are located in the intronic regions.

As we discussed, some of the miRNAs are highly conserved in all mammals, these miRNAs have on average more than 400 different conserved target mRNAs.

Further, around 16% of pre-miRNA affected by the RNA editing process (which can not work properly during gene silencing).

The first miRNA is discovered by Lee and Feibaum in 1993.

Chronic lymphocytic leukemia is associated with the dysregulation of miRNAs.

Introns are spliced out from the gene thus any miRNA sequence is present in the intronic regions also spliced out that bypass the microprocessor complex are known as “Mirtrons”.

Conclusively, microRNA-mediated therapies might be a good choice in comparison with shRNA or siRNA. Yet, a large number of data needed to understand the exact function, mechanism and action of miRNA.