“The shRNA is an artificial dsRNA loop or hairpin used in the gene silencing studies using the RNA interference mechanism.”

The mechanism of shRNA action is similar as like the siRNA. We had already discussed the siRNA. Read the article here: siRNA (Small Interfering RNA): Structure And Function

dsRNA (double-stranded RNA) is a sign of danger for a cell, using the mechanism called RNA interference, the cell destroys the dsRNA.

Because the dsRNA is not a genetic material of us, thus this exogenous dsRNA damages the cell.

The RNAi mechanism using either the shRNA or the siRNA can be applied for the artificial gene silencing and gene expression studies.

The shRNA is called a short hairpin RNA or small hairpin RNA, is 20 to 25 bp polynucleotide chain of the RNA in which 4 to 11 nucleotides forms a loop, a hairpin-like loop.

Although it does not have the dinucleotide overhang at the 3’ OH end of it, unlike the siRNA. The shRNA behaves like a dsRNA, recognized by the endogenous dicer.

The RNA interference silencing complex is formed by the alliance of dicer, siRNA or shRNA, argonaute (Ago) protein and dsRNA binding protein.

Alike the siRNA, the shRNA also have the guided strand and the passenger strand.

Once the RISC finds the dsRNA it recognised the guided strand of it, and localize it on the complementary mRNA strand.

The Ago protein present in the complex cuts the hybrid in a middle, followed by the subsequent endo and exonuclease cuts on the same mRNA.

The mRNA degrades into smaller pieces and can not undergo further translation. Hence the gene product which can be encoded by the mRNA can not forms.

The short hairpin RNA can be artificially synthesized within the cell.

comparison between the structure of siRNA and shRNA.

The expression of the shRNA can be induced using the plasmid, bacterial vector or viral vectors. However, the viral vectors are not recommended due to the risk of infections associated with it.

In the RNAi pathway, As compared to the siRNA, the shRNA is more effective because of the low mRNA degradation rate and turnover.

For doing this, the expression vectors must contain the gene for the shRNA and the promoter for robust shRNA expression inside the cell.

The RNA pol III or the DNA pol II promoters are generally utilised in the shRNA mediated RNA interference.

The U6 and H1 promoters are commonly used in the expression vectors for specific binding of the RNA pol III because it facilitates a high level of shRNA expression.

However, the promotes CMV and EF1 can not express shRNA effectively as like the U6 and H1.

Once the expression vector penetrated into the host genome the shRNA is transcribed using the polymerase we selected.

Broadly, the mechanism of the transduction through the lentivirus is as followed:

Once the shRNA inserted into the cell, it reverses transcribed into DNA.

The gene along with the promoter for polymerase inserted into the genome and transcribed into pre-miRNA like pre-shRNA using the polymerase which is processed by the Drosha.

Note: Drosa is a class 2 ribonuclease III involved in the dsRNA maturation.

Now the pre-shRNA then transported into the cytoplasm using the exporting5 protein.

The fully matured shRNA processed by the dicer and cleaved in a siRNA like dsRNA molecules which is later on loaded into the RISC.

Leaving the passenger strand behind the guided strand guide the complex to the complementary mRNA and binds to it.

The Argo protein loaded in the RISC cleaves the mRNA and stops the protein formation governed by that mRNA.

The mechanism of the shRNA mediated mRNA degradation is shown in the figure below, 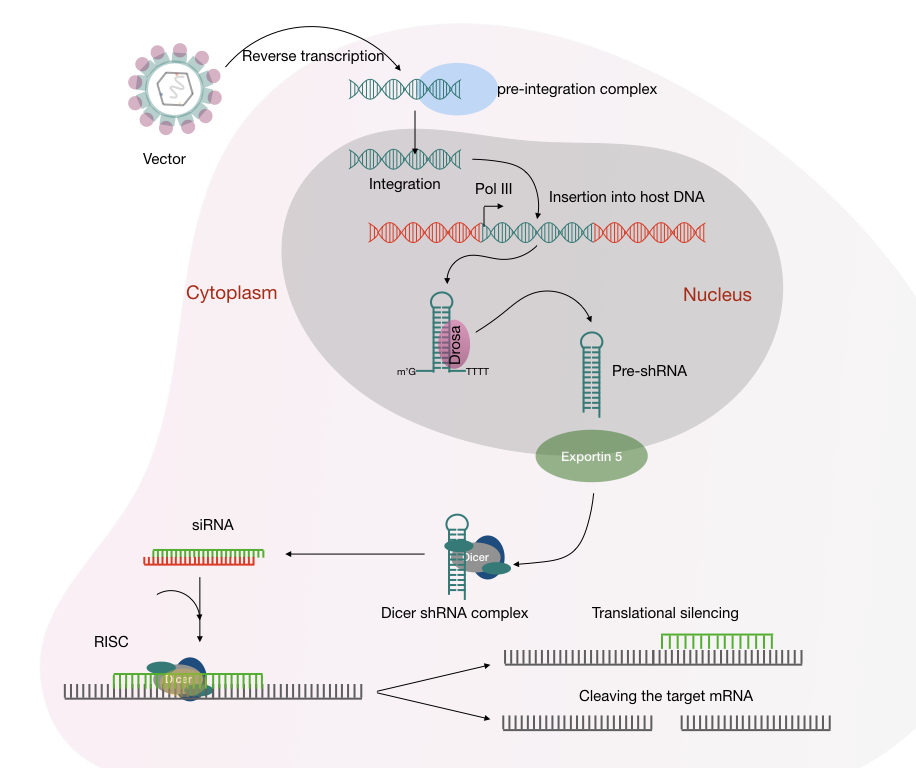 In the year 2012, the first shRNA mediated gene therapy for the Familial Adenomatous Polyposis was done using the gene knockdown method.

Read more: What is Gene Therapy? and How Does it Work?

The mechanism of the shRNA action is yet not understood well by scientists thus there are several challenges we have to face while using the shRNA in the gene-silencing technology.

It is possible that the patient’s cells may develop a strong immune response against the shRNA.

Due to the use of expression vectors, the shRNA might be expressed in a higher amount and thus the cell can not proceed it correctly.

Also, this will result in the higher saturation of the RISC which creates another problem by processing the wrong mRNAs.

The therapy is not fully tested and might go off target, this can affects the expression of other genes as well.

Furthermore, it can not work for all type of cells.

Non-dividing cells and immune cells can not be transfected using the shRNA due to the lower transfection efficiency. It takes months to prepare shRNA positive cells for transplantation.

Besides all these, one of the major limitations of the shRNA mediated RNA interference is the use of expression vectors.

Lentiviruses and other retroviruses are common vectors for the shRNA, hence the use of the retrovirus can cause several health issues.

Safety is one of the major concern associated with the use of viral vector-mediated shRNA therapy.

As the siRNA and shRNA used the same mechanism of RNA interference, the choice of the therapy depends on the cell type, transient vs stable gene expression, time demand and the risk associated with it.

The general steps for shRNA mediated RNA interference given below,

Selection of the target gene;

Minimum of two target sequences should be designed for one particular gene for increasing the efficiency of RNAi.

Construction of shRNA ranging from 19 to 27bp complementary to the gene of interest, although the 19bp shRNA will give the best results.

Note: PCR based cloning method is widely used because of the accuracy and the speed of PCR amplification. Read more on PCR: A Complete Guide of the Polymerase Chain Reaction

Here the single base mismatch can prevent the hairpin formation thus it is very necessary to select the sequence having the best hairpin forming capacity.

After that, the promoter sequence is selected of the RNA pol III or DNA pol II. Read our article on DNA polymerase: Multifunctional DNA Polymerase: An Overview

The lentivirus-mediated transduction is less toxic as compared to the AAS virus-mediated therapy, furthermore, it can also infect the diving as well the non-diving cells efficiently.

After all that, the cells or the target cells are infected with the vectors having the shRNA for the gene knockdown study.

The efficiency of the transfection is measured using the quantitative PCR analysis.

The quantitative PCR or the reverse transcription PCR is a tool used to measure the gene expression.

Also, the function assay can be performed for checking the efficiency of the gene knockdown if the biological function of the target gene is known.

Read our articles on real-time PCR:

It is very necessary for researchers to find out the safest and secure therapy to alter gene expression. Perhaps, shRNA or siRNA mediated therapies do not fulfil these criteria now, both methods have the potential to do well in future.

shRNA like RNA interference methods can be the best screening tool for cancer and related studies.