In other words, we can define it as,

"The amount of the RNA present in a sample can be quantified by using either fluorescent dye or probe by synthesizing cDNA from RNA using the reverse transcriptase enzyme."

We are using PCR to generate copies of DNA, it has unmatched application in genetics and genomics research. Using the Taq DNA polymerase, DNA synthesis occurs in conventional PCR. The Taq DNA recognizes the binding site or substrate ( the ssDNA and primer binding junction) and adds dNTPs to the growing DNA strand. The Taq has the power to amplify any type of DNA such as gDNA, plasmid DNA or viral DNA

As retrovirus and other related viruses have RNA as their genetic material, their amplification and quantification are not possible using conventional Taq DNA polymerase. The reason is that the Taq can only synthesis DNA not RNA.

During the ’90s Northern blotting was used to study the RNA but the method was tedious, time-consuming, and unreliable. So to study RNA we need to convert it into DNA first. After the discovery of reverse transcriptase enzyme the problem was solved.  It is potent enough to synthesize DNA from RNA.

In this article, we are going to understand another important type of PCR method, reverse transcription PCR in which instead of DNA the starting material is RNA.

What is reverse transcription PCR?

Reverse transcription PCR, often known as quantitative PCR of quantitative RT-PCR measures gene expression by amplifying cDNA reverse transcribed from RNA. To study mutations or genotyping, we are using DNA then why RNA quantification is required? The answer is here,

Total genomic DNA has coding and non-coding sequences, coding sequences are known as genes which also has exons and introns. During translation, the amino acid can be formed only from coding regions viz from the exons. So during transcription, only the coding sequence- exons of a gene forms a transcript or mRNA.

Therefore, by quantifying the RNA, the amount of a gene present in a cell can be measured or determined. This is the whole fundamental of gene expression studies.

The figure below is the graphical representation of the central dogma process. 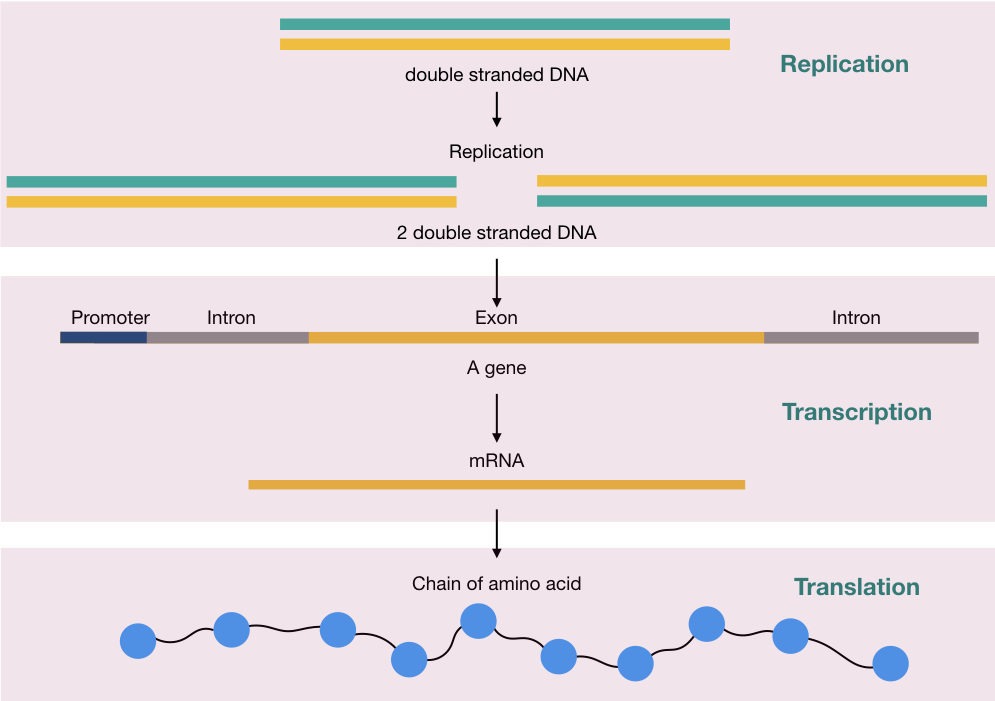 RNA, set of primer, set of probes, dNTPs, reverse transcriptase, and PCR buffer are key ingredients of the assay. We have to first extract RNA instead of DNA. Next, the set of primers for amplifying a gene is selected. Oligo (dT) primers, random primers, and sequence-specific primers are three types of primers commonly used here. However, which primer is applied, it depends on the type of RT-PCR assay.

The function of reverse transcriptase plays an important role to make the present technique successful.

Howard Temin and Satoshi Mizutani had discovered reverse transcriptase enzyme, although it was first isolated by David Baltimore in 1970. It is found in retroviruses and other RNA containing viruses.

In the retrovirus, the enzyme forms DNA from its RNA which inserts into the host genome at where it is replicated, transcribed, and translated and forms viral proteins.

The enzyme is a type of RNA dependent-DNA polymerase or RNA directed DNA-polymerase. The retrovirus has only three genes, ‘gag‘, ‘pol‘, and ‘env‘ that forms polymerase, envelope, and other proteins of retrovirus thus the entire mechanism is known as reverse transcription.

Depending upon that the RT- qPCR can be performed by two methods:

In a single tube or single reaction, reverse transcription and amplification are performed (therefore it is named as one-step RT-PCR). It is widely used in repeat quantification assays and high throughput screening due to its high accuracy, specificity, and easy to use & simple set up.

In comparison to two-step PCR, the chance of reaction failure and contamination are less because we are performing the reaction in a single tube here. The one-step set has several limitations,

Because we are using various chemicals and reagents in a single reaction, reaction conditions are sometimes compromised, thus it can detect less template per reaction or sample. Still, it is fast and reproducible.

Also, two different reactions from a single sample can’t be performed because cDNA synthesize and amplification occurs in a single reaction. So we can not store the cDNA as a stock to use in further reactions.

The template amplifies in both initial and exponential phase thus we need more starting material or template to perform the reaction.

Here we are using sequence-specific primers and the reaction is single-step, thus the chance of non-specific bindings and primer dimer is too high.

The entire process of one-step PCR is explained in figure below, 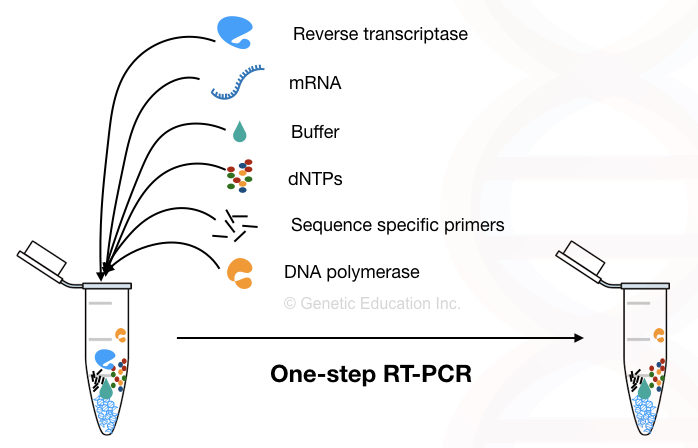 Contrary to the one-step method, in the two-step RT-PCR the reverse transcription and amplification are performed in two separate reaction tubes. That is why this variation is known as two-step RT-PCR. Notably, both reactions have different conditions and ingredients used in it.

In the first reaction reverse transcriptase enzyme, dNTPs, reaction buffer, oligo-(dT) primers, and random primers are used to build a cDNA. After completion of the reaction, we get cDNA stock which we can store to use in the future, or we can do amplification for gene expression study.

One of the biggest advantages of the two-step method is that we can store the cDNA reverse transcribed from the RNA.

The present method performs so good for a smaller amount of sample nevertheless, due to the additional step, the chance of the contamination and reaction failure is higher in the two-step RT-PCR reaction.

Since the method is specific, accurate, and over the top than one-step methods, still, it is not used in high throughput screening. The reason is that it is time-consuming, the chance of contamination is high and costlier (as more reagents are required).

Last but not the least, from my personal experience I can say broad experience and expertise are required to perform two-step PCR. Usually, it is used in viral gene expression studies. The graphical illustration of the process is shown in the figure below,

The procedure of RT-qPCR completed in the following steps,

Instead of DNA, RNA is extracted for the RT-PCR. For extracting the RNA use ready to use RNA extraction kits, it performs better and the yield of the extraction is even good.

We have to extract RNA, not DNA. Care must be taken while extraction as RNase present on every possible surface in a lab. RNase is an enzyme cleaves RNA. Here we are extracting total RNA, not mRNA for gene expression study.

Use ready to use RNA extraction kit to avoid problems in extraction. So use total RNA instead of the only mRNA.

In the next step select the primer for the experiments. Three types of primers can be used in the reverse transcription PCR.

Random primers are short single-stranded sequences of hexamers or octamers. The random primer binds at the complementary random location on the RNA. It can bind to many types of RNA (tRNA, rRNA or mRNA) and synthesizes the cDNA.

It is used in the RT-PCR particularly for the templates having a huge secondary structure. Random hexamer provides high yield cDNA. However, it can produce truncated cDNA.

The randoms primers work finely for prokaryotic DNA, rRNA, rRNA, and other smaller RNAs. But as it can’t bind to poly-A tail, it is less preferred for eukaryotic RNA amplification.

Smaller fragments of RNA can be easily amplified using randoms primers. 2 to 5 μM concentration of random primers is enough for RT-PCR. Higher concentration can make the reaction ineffective. The hexamer bindings on RNA are shown into the figure below.

The oligo (dT) primers are 12 to 18 nucleotide long single-stranded DNA which contains one additional nucleotide at the 3′ end to anchor the binding. The anchored (dT) primers prevent the primer slippage and primer denaturation from the poly-A tail.

oligo (dT) primer binding on the template mRNA is shown into the figure below,

Furthermore, it can only amplify a specific region, a large amount of primary template is need to perform RT-PCR using this type of primers. Due to its high sequence specificity, it is preferred more in gene expression studies.

The sequence-specific primers synthesize only certain regions from the RNA, therefore less amount is recommended to achieve success in the reaction. 0.5 to 1.5 μM concentration is enough for the RT-qPCR.

Note: If sequence-specific primers and oligo (dT) primers both are used in a single reaction, use the only 1μM each primer.

The figure above shows the specificity of the sequence-specific primers, as it can only bind to the mRNA and cannot binds to gDNA.

Components used in the RT-qPCR:

Selecting every PCR ingredient and its quantity is as important as selecting temperature conditions for PCR. Nowadays, ready to use reverse transcription PCR kits make your work efficient as it has every ingredient in it. Let us see some components of RT-PCR,

The major components are,

Read more on dNTPs: The Function of dNTPs in PCR reaction

Here, the denaturation step is not required. The PCR reaction starts with the primer annealing. At the first stage, the primer binds to the template RNA, once it’s done, the reaction is placed for cooling at 4°C for proper binding. New strand synthesis initiates in stage two or second step, afterward, that is followed by the enzyme deactivation in step three.

Thee different steps of RT-PCR are shown in the figure:

In the beginning, the reverse transcriptase enzyme amplifies the cDNA from the single-stranded RNA, known as a first-strand cDNA synthesis. See step 1 in the figure below.

The reverse transcriptase enzyme does have the RNase activity that cleaves the RNA from the RNA-cDNA hybrid into smaller fragments. Use E.coli RNase H separately into the reaction to separate the hybrid. Remember, do not use a higher concentration of RNase H because it cleaves the longer RNA template prematurely.

Now, the nicks generated by the RNase H activity is filled by the DNA polymerase.

After the synthesis of the new DNA fragment, the nicks between adjacent DNA are ligated by the ligase enzyme. Here, use E.coli DNA ligase instead of T4 DNA ligase. The second strand is now read.

The mechanism of strand synthesis is explained into the figure below, 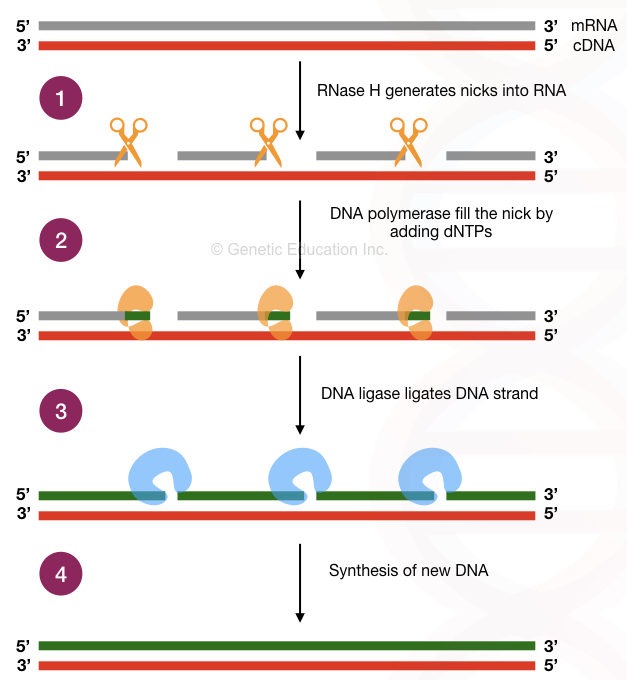 The present method is used to monitor the prognosis and therapy responses to cancer patients.

The amount of tissue-specific mutant alleles can be determined.

It is also used in gene insertion studies and gene therapy experiments.

Disease diagnosis and microbial identification can be done using this technique.

The reverse transcription PCR or RT-qPCR or qRT- PCR is a gold standard method for HIV and HPV detection, also, various other viral infection can be measured. In short, we can say, though it has the power to measure expression, it can’t perform gene sequencing. New various or sequence information can not be obtained by using it.