“The branch of the science deals with the study of the genetic factors and environmental interaction causing cancer and related traits called cancer genetics.”

Cancer itself is not an inherited disorder.

The inherited disorders are caused by some of the genetic factors or gene defects which inherited from one generation to another generation as in a dominant or recessive pattern.

If it remains in a recessive condition, it can not affect an organism but that is not a case with cancer.

Cancer is caused by some genetic factors (either genetic or epigenetic) and their interaction with the environment.

In simple, language we can say that if one of our family members is suffering from cancer that doesn’t mean that other member who getting that defected gene got affected.

Instead, the chance of developing cancer is high in that person or other members of the family.

Till date, so many genes and mutations are identified that leads to cancer, also, some chromosomal aberrations are also identified which involved in cancer.

BRCA1, BRCA2, p53 and BCR-ABL1 gene fusion are some of the well-known cancer markers involved in various types of cancers.

In the present article, we are discussing cancer genetics, genes involved in cancer and common cancer causatives.

Our body is made up of different types of tissues, a tissue is a bundle of cells.

A cell is a basic building block unit of body, the process of cell differentiation and apoptosis controls the number of cells in each tissue.

Thus both the process are very important for the survival of an organism.

Through cell differentiation, different cells are generated and through the apoptosis, older or aged cells die.

Imbalance in this process causes cancer.

“Cancer is a process of uncontrolled cell division caused by genetic mutations which can spread or invade to other parts of the body.

The clump of abnormal cells is called a tumor, if it spreads to other parts or tissue it is termed a malignant tumor.

If it remains restricted to one place or at one specific tissue, it is termed as a benign tumor.

Worldwide, tobacco is the major cause of cancer. However, other factors are also involved in cancer.

Some of the common cause of cancer and its prevalence is given below,

About 95% of cancers are originated due to gene mutations or genetic defects.

Factors that cause cancer:

Note: some of these symptoms may observe in some other conditions too.

Carcinoma is a cancer of the skin and other tissues surrounding internal organs and glands.

Leukaemia is majorly a cancer of blood cells.

Sarcoma is a cancer of joints, muscles, lymph vessels and cartilage.

Lymphomas is a cancer of the lymph node and lymphatic system.

[epcl_box type=”information”]Interestingly, cancer is a group of more than 100 disorders and many gene mutations. [/epcl_box]

Cancer is a consequence of abnormal cell division.

The process of cell division is governed by enzymes and some regulatory proteins and as we all know, the proteins are encoded by genes.

Acquired mutations are one of the most common reasons for cancer which causes sporadic cancer.

A mutation is a change in the DNA or gene sequences that encodes a particular protein and thus, due to this, abnormal protein product forms.

The acquired mutation occurs in a gene or group of genes in a specific type of cells and causes tissue-specific cancer.

Majorly, the somatic tissues are the target site for the acquired mutations and are non-inherited.

On the other side,

The germline mutations occur in the germ cells, either in the egg or sperm.

Interestingly, these type of mutations can be inherited to the next generation and causes cancer in offspring too.

Cancer leading germline mutations are very rare account only 5 to 20% of cases.

“Cancer accumulated because of the multiple mutations in a single gene or group of mutations in many genes over a period of time throughout life.

The cancerous genes are broadly classified into two broader categories:

The genes categorized into the oncogenes that have the capability to transform normal cells into tumor cells.

The oncogenes are a mutant form of the proto-oncogenes.

The proto-oncogenes encode proteins involved in the cell division, regulation of cell division and cell death.

Once, the proto-oncogenes are mutated it converted into oncogenes and leads to cancer.

Broadly it is classified into;

HER2 family oncogenes: encode proteins that help in the growth and invade of cancer cells.

Some of the examples of oncogenes are,

As the name suggests, the tumor suppressor genes (TSG) are the class of genes that suppress the activity of tumor development.

We can say, it is a natural protector of our cells. These class of genes encodes proteins that can control cell division, controls cell death and helps in DNA repair.

The acquired/germline mutations in the tumor suppressor genes produce a loss of function mutation which results in the tumor development.

For example, mutations in the class of BRCA tumor suppressor genes can increase the risk of hereditary breast or ovarian cancer.

The p53 is one of the common POG(proto-oncogene), mutations in p53 involved in many types of cancers. 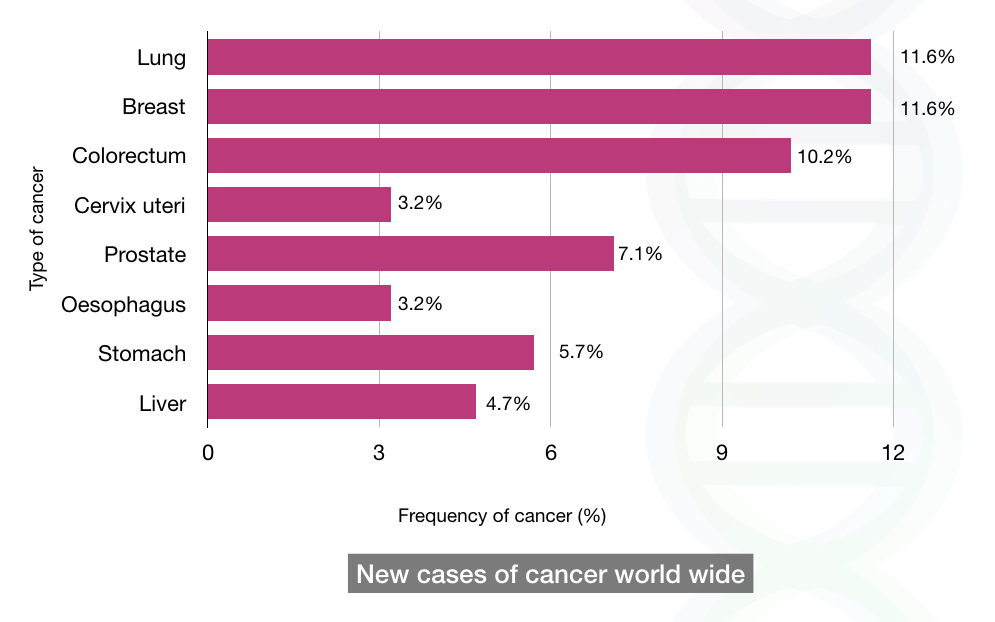 Cancer-causing mutations are point mutations, SNPs, loss of function or gain of function mutations, however, some cancers are also caused by chromosomal aberrations like translocations or duplications.

This translocation results in the fusion of the BCR and ABL gene and causes chronic myeloid leukemia.

Recent studies found that epigenetic factors are also involved in the development of a tumor.

Epigenetic alterations are related to the change in gene expression, not gene mutation.

Which means that the nucleotide sequence remains unchanged, instead, the expression of that particular gene is altered.

DNA methylation, histone modifications, acetylation and ubiquitination are some of the examples of epigenetic alterations

If we take an example of DNA methylation,

A particular gene has a fix methylation pattern, hypermethylation or hypomethylation causes a change in gene expression.

Hypermethylation is reported in 50% of colon cancers.

Error in replication, error in DNA repair mechanism and abnormal telomere activity is responsible for cancer too.

Cancer is a complex genetic disorder, originated due to many reasons hence none of the single methods is appropriate to detect the specific type of cancer.

The genetic testing for cancer may help for,

As we discuss in an earlier segment, a mutation in the p53 gene involved in many types of cancer.

Therefore, even though we found a mutation in the p53 gene, we can surely not conclude the condition of cancer.

Other confirmation tests are also required to confirm the results.

PCR is used for finding a single or couple of mutations because amplification of multiple fragments is restricted in PCR.

For example, PCR can be used for screening the mutations present in the BRCA gene for breast cancer. Nonetheless, for confirmation of it, real-time PCR is used.

Karyotyping and FISH techniques are used for detection of large copy number variation like deletion, duplication or translocation.

For example, karyotyping and FISH both technique is used for detection of translocation between chromosome 9 and 22, the Philadelphia chromosome.

For identification of multiple mutations in a gene or in a group of genes, DNA sequencing and DNA microarray like techniques are employed commonly.

DNA sequencing is one of the most accurate, reliable and fast methods to detect cancer-causing gene mutations.

Nowadays, techniques like next-generation sequencing, whole-genome sequencing and whole-genome microarray employed to screen the entire genome for detection of any mutation in any gene.

NGS has the potential to identify each and every mutation present in the genome. 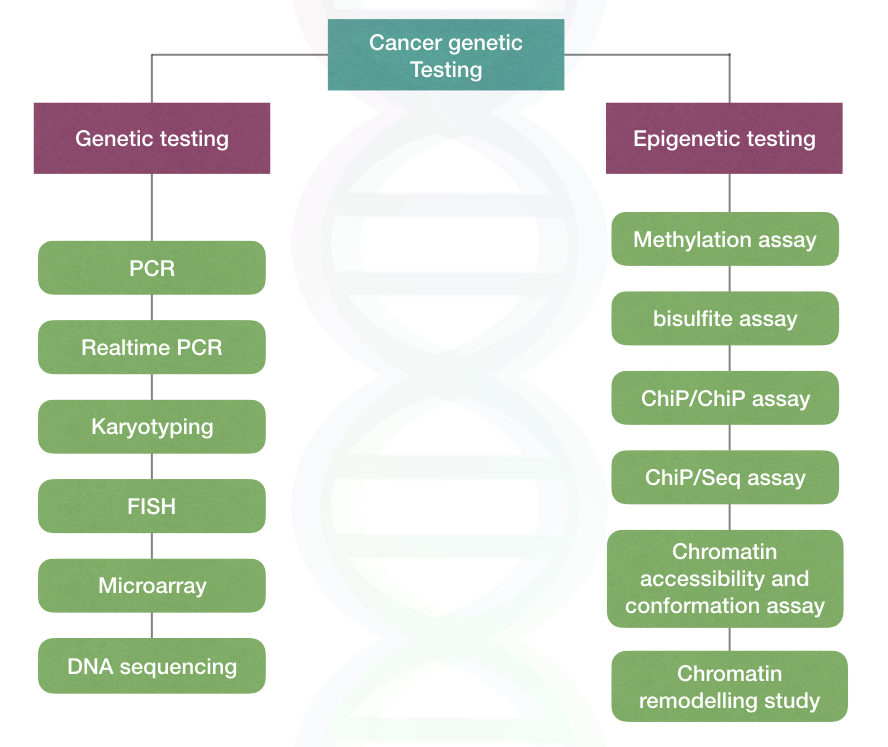 DNA methylation assay is used for detection of the amount of methylation, hypermethylation or hypomethylation in a particular gene or group of genes.

DNA/protein interaction assays and ChiP/ChiP assay are used to detect the interaction between DNA and histone proteins.

Most common cancer in male and female worldwide: 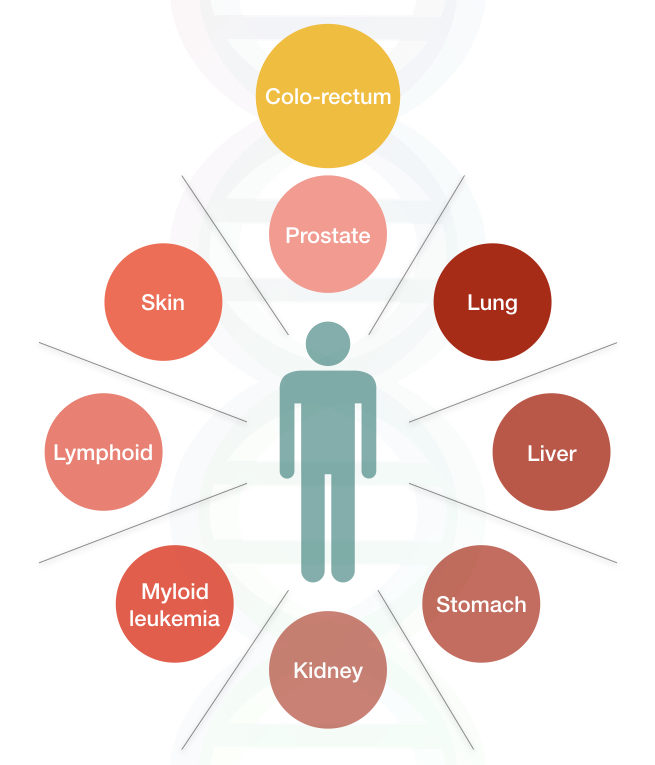 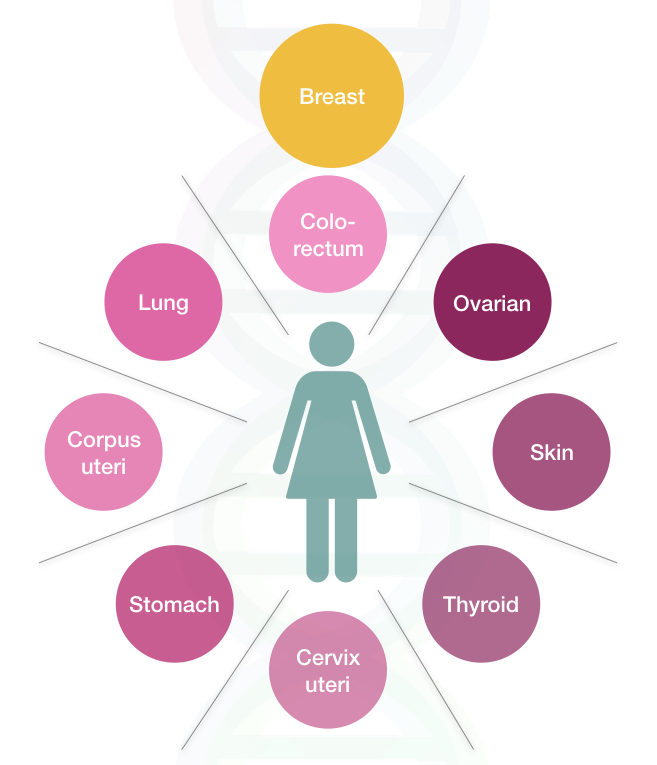 Although, a person with the family history of cancer predisposition or hereditary cancer, having a higher chance of developing cancer but it does not mean he or she will surely suffer from cancer.

Furthermore, cancer originated due to the mutations in oncogenes and tumor suppressor genes but,

It does not mean that mutations in any of the genes surely cause cancer.

Some of the viruses such as retroviruses are the causative agent of cancer which activates oncogenes or inserts oncogenic sequences into the genome.

By eating plenty of veggies and fruits, maintaining a healthy lifestyle and stress-free life, we can prevent cancer.