“The gene therapy is a laboratory genetic technique practiced in order to cure the genetic disorders by replacing a defective gene with a normal one.”

Simply put, we say that “gene therapy is a technique used to prevent or cure any genetic disease or some.”

A defective gene can cause “ailment.” (Ailment: combinedly used for  disorder, illness, sickness or disease).

The cell is a basic building unit of any living entity and carries DNA in it. The DNA is an “information storage unit” that transfer genetic information from one generation to another. It is made up of three units and we know it right!

Via the intermediate mRNA transcript, the DNA forms a protein. For that first mRNA is manufactured through transcription and protein is formed by translation.

So to make every protein properly in every organism and in every generation, it is very important that the DNA remains unchanged. If a mutation occurs in DNA, the protein can’t form properly thus a phenotype can’t be made. The condition becomes even worse if it happens in the coding regions of DNA (means exons).

We are starting a new series of articles on gene therapy. This article is just an introductory basic article that clears your fundamentals regarding gene therapy and how it works.

What is gene therapy?

“Gene therapy is a technique used to cure genetic defects or genetic disorders by removing the faulty gene or inserting a wild type one to the genome.”

Notably, it should be kept in mind that it shouldn’t harm the patient. The overall idea of gene therapy is given into the figure below,

The gene therapy is used,

These are some of the common objectives of any gene therapy experiment, using a definite vector a faulty gene can be treated.

[epcl_box type=”notice”]The “vector” used here is not only a plasmid vector, in a broader sense, a vector is a vehicle used in gene therapy.[/epcl_box]

We have explained both types of gene therapies in this article: Gene Therapy: Types, Vectors [Viral and Non-Viral], Process, Applications and Limitations.

How does gene therapy work?

There are three main components of gene therapy, 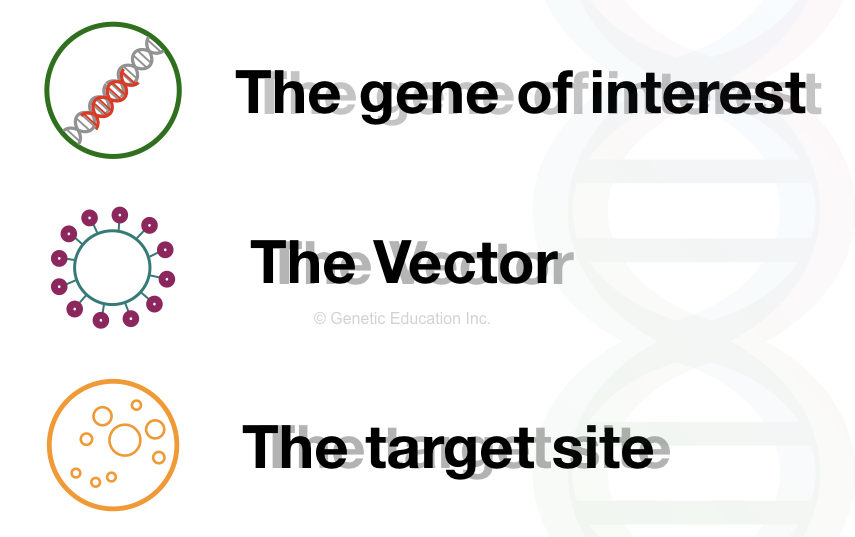 The gene of interest is the new normal or healthy gene that we wish to introduce in place of the mutant gene. In a scientific term, a gene of interest often denoted as “GOI”, it is carried by the vehicle or a vector. In the first step, the GOI introduced in the vector.

Several vectors such as viruses, transposons or other naked DNA are often used as a carrier of genetic material. If a virus is used as a vector, before doing the gene transfer, the virus is modified in such a way that it can not infect the cell in any way. Retroviruses, adenovirus and Adeno-associated viruses are frequently used as a vehicle for gene therapy.

In the next step,

The vector introduces a new gene in the mutant cell at a target site. The target site is a location where our GOI is going to be inserted. But before that, the vector is first introduced into the target cell using some artificial techniques like electroporation, gene gun or particle bombardment.

Intravenous injection is also the best method to do so. After infection, the vector inserts a new gene at a specific location, the naked vector is engulfed and destroyed by the host cell.

Now, after insertion, a gene replicates into the host cell and makes copies (If all goes well). After several cycles of cell division, the mutant cell is replaced by the cell having a new gene. The gene of interest now transcribed into new mRNA and translates new healthy protein.

Broadly the mechanism of how gene therapy works is shown into the figure below, 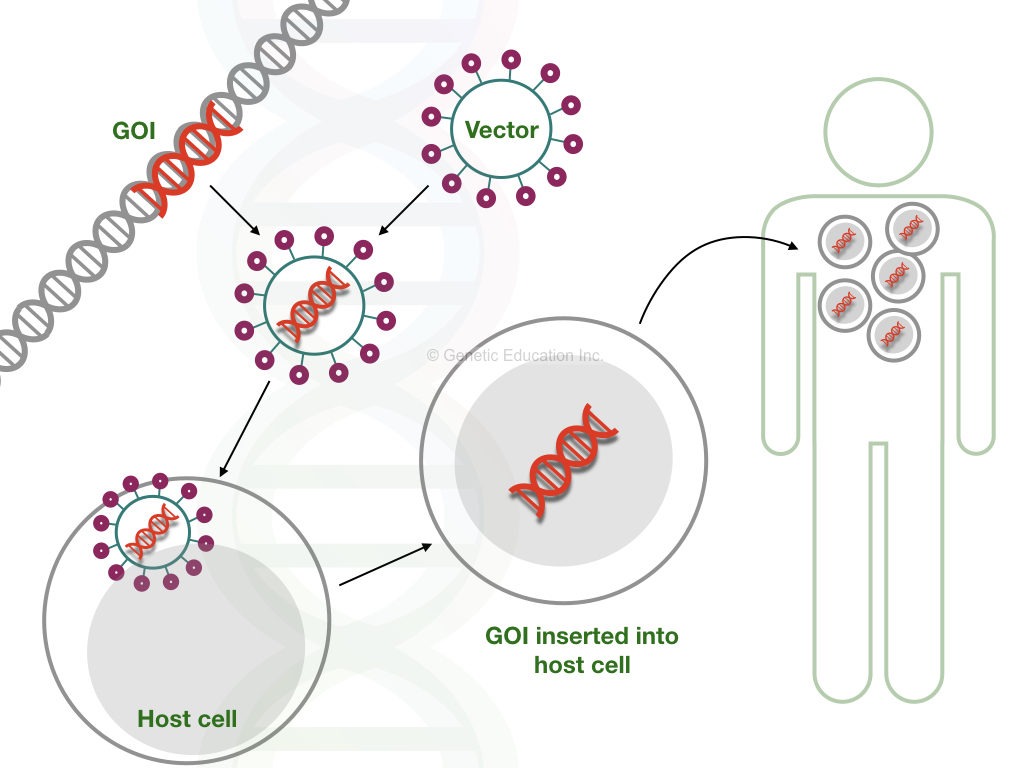 The gene therapy approach is more promising for somatic tissues in which a certain part of the body contains the mutant gene.

For example, for Parkinson’s disease in which a specific part of the brain is non-function, scientists are trying gene therapy for that. However, it is under trial phase. Another example of ex vivo gene therapy is the sickle cell disorder,

The abnormal cells are collected from either blood or bone marrow. The gene of interest is inserted with the help of some physical or chemical agents inside the cell. The altered cells are grown in the lab and inserted back in the bone marrow or bloodstream.

The repaired cells grew faster through the cell division and replaces the older abnormal cells. Germline gene therapy is strickly prohibited by FDA because of the higher risk factors associated with it.

And by the way, “playing with an embryo or altering embryo is ethically against nature.”

Though gene therapy is a promising method, the success rate of it is too low. Additionally, the risk associated with any type of gene therapy is unknown, we do not have any idea about what harmful effect it can cause. The patient may die or he or she may suffer from some other type of infection or cancer.

Nonetheless, new approaches to gene therapy such as the use of transposon and CRISPR-CAS9 is more promising and safer.

“The sleeping beauty transposon system”, futuristic gene therapy uses a transposon to introduce a new gene at a specific location.

Read our article on the SB transposon system it contains all information and mechanism on how it is done: Sleeping Beauty Transposon System: The Future of Gene Therapy.

Another method is CIRPSR-CAS9 a bacterial system is used for gene editing. Both methods are immensely target-specific having a huge success rate. Still, it required some time and extensive trial/testing to gain attention in mainstream clinical uses.

Thanks to nanotechnology, some of the nano molecules such as liposome and lipoplex are now available that effectively facilitate gene transfer without using any virus.

The classification of gene therapy is explained below, 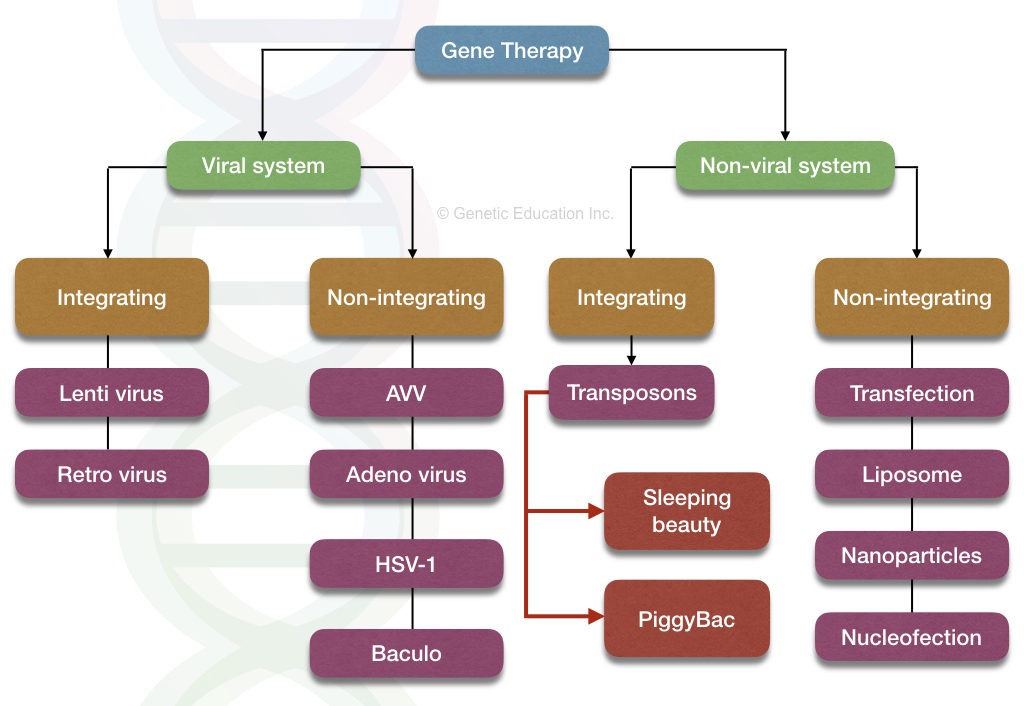 The monogenic disorders that occur by single-gene defect are treated well, using gene therapy. Scientists have gained substantial results. To teat or replace many genes at one time is a tedious job and for now, it is impossible. This is the reason why gene therapies are not successful for polygenic disorders.

Besides this, gene therapy has several other limitations that make it unrealistic at least for now.

Additionally, ongoing trials on animal models confirm that AVV gene therapy is one of the encouraging approaches for curing cancer.

Hopefully, these gene therapies might available until 2020 for routine medical use.

Apart from all these, the discovery of CRISP-CAS9 and SB transposon system and their recent advancement clearly indicates that the future of gene therapy is excellent.

Conclusively we can say that gene therapy is not ready for the present medical scenario, but it might fully accessible in the future for mankind.

Any gene therapy going to main clinical trial phase must be safer, effective and target specific.

Some of the approved gene therapy:

FDA recently approved gene therapy for some disorders are enlisted below,

Gene therapy for the spinal muscular atrophy (SMA) with bi-allelic mutations in the survival motor neuron 1 (SMN1) gene for the treatment of pediatric patients of less than 2 years old.

Gene therapy for the retinal dystrophy (biallelic RPE65 mutation). This is an AAV based gene therapy therefore viable retinal cells must be present for therapy.

Germline gene therapy is not yet “completely” approved by the FDA and the USA government for commercial mainstream use due to the lower success rate and risk associated with it. Still, some of the partially approved (non- germline) gene therapies are listed above.

The recent gene therapy progress on sickle cell, congenital amaurosis (blindness) and the bleeding disorder is giving hope for their use in the upcoming years. But for now, fully functional gene therapy is just a fairy tale for us.