The Tc1/mariner type fish transposons (that is a Sleeping Beauty transposon) are activated back from a long evolutionary sleep. They were inactive for more than 10 million years in salmonid fish due to the higher rate of mutations.

Approximately ~3% of the human genome is made up of a similar type of transposons, nearly 20,000 inactive Tc1/mariner type of TEs are present in humans.

SB system is a technique used for the artificial, in vitro gene transfer in the vertebrate organism. The first functional model of it was developed in the year 1997 named as SB10.

The present topic contains all information on the sleeping beauty transposon system and its role in artificial transposition.

The transposons or transposable elements are first discovered by B. McClintock in the early ’50s.

The transposons are some of the mobile genetic sequences present into the genome of an organism that can move from one location to another location.

The transposons are able to move some of the DNA sequences along with them to another location and by doing this they can regulate gene expression, switch on/off gene function and creates new variation into nature.

It is believed that transposons played an important role in the process of evolution. We have covered an amazing article on this topic, please read the article here: Role of transposons in evolution 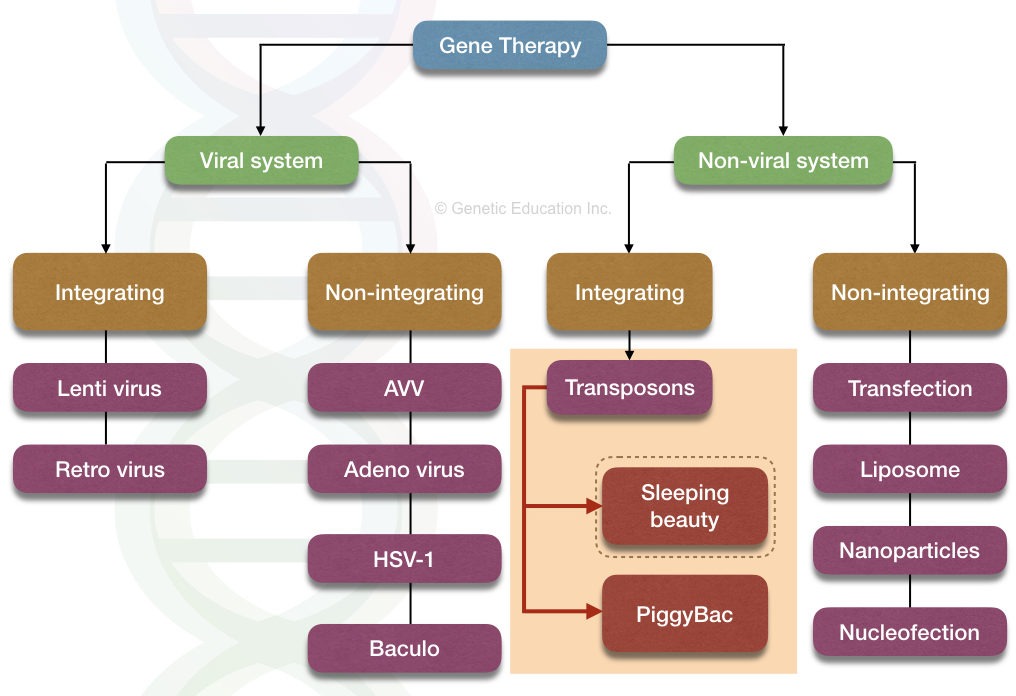 CRISPR CAS9 is a gene editing tool which is used to manipulate the DNA sequences.

Both the gene editing and gene therapy are utilized for triggering the normal function of a gene or to remove the faulty gene by the healthy one.

“Sleeping beauty transposon system” is another method used to do so. It is a kind of non-viral mediated integrating gene therapy.

Abbreviation used in the present article:

A long term, stable expression of a transgene can be induced by using the cut and past sleeping beauty transposons in transgenic cells, especially in the vertebrate.

The SB system is one of the best examples of the non-viral/ integrating type of gene therapy.

This gene delivery system is safer, simpler and effective.

The SB transposon is the first functionally active transposons present in the vertebrates. The genetically engineered synthetic SB elements were designed from the fossils of the salmonid fish genome.

Vectors are an important carrier for the transposition of a GOI via SB system. Some of the different types of vector system which are highly efficient and frequently used are pT (the native plasmid), pT2, pT3, pT2B, pT4.

Besides the pT, all other vector systems used in the transposition are artificially modified.  Different versions of plasmid are generated by modifying or changing the nucleotides present on the inverted terminal repeats of the SB transposon.

Long back in the year 1997, the first functionally active sleeping beauty transposon system was successfully developed and named it as SB10.

However, the efficiency and specificity of the insertion were too low with low accuracy.

This system was most advanced and had 100 fold more efficiency than the previous system.

The detail information on a different type of SB system is given below,

Components and structure of the SB system:

Every transposon contains some of the basic and common types of components. Terminal repeats, gene body and transposase enzyme are commonly present in all type of transposons.

Although, some other types of sequences and enzyme are also present.

Likewise the other natural transposons, the sleeping beauty transposons also contains two of the important components.

The terminal repeats are inverted or direct repeat that can be recognized by the transposase protein during the transposition process.

The terminal repeats are actually a unique identity of a transposon, that serves a binding site for the recognition protein, a transposase.

SB transposase is an enzyme needed for the transposition of a  DNA sequence. It performs a catalytic function.

By binding to its recognition site on the terminal repeats, it cuts it and migrates to another location into the genome.

The general mechanism of transposition is shown in the figure below, 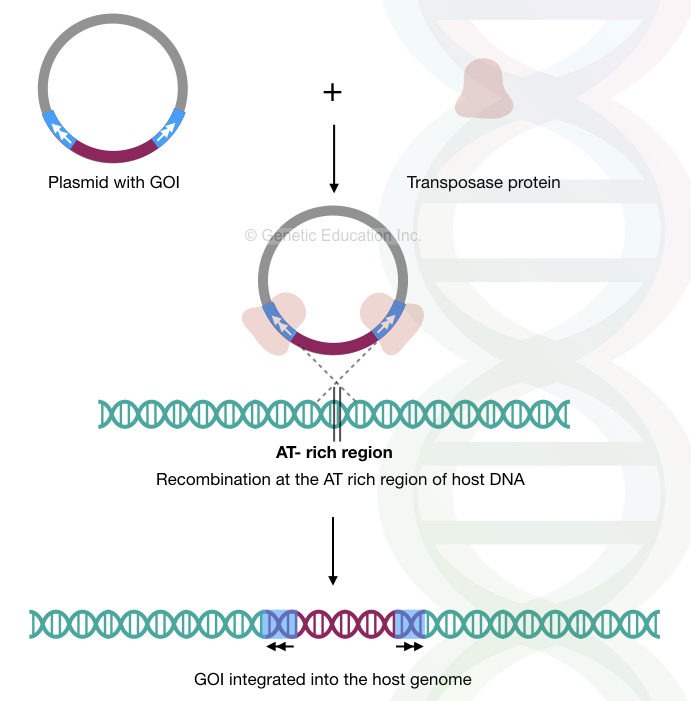 The transposase gene located between the terminal repeats encodes a 39kDa protein transposase.

The catalytic domain helps in the transposition, the NLSD helps in the localization of SB transposon into the nucleus of the host genome.

Majorly the transposition of a sleeping beauty transposon divided into two steps, excision and integration.

The transposase containing plasmid along with the plasmid having GOI are inserted into the target cells.

After settling into the nucleus, the gene for transposase constitutes mRNA for it through the transcription.

The mRNA migrates to the cytoplasm of a cell and forms a transposase protein via translation.

The mechanism of the process occurred in the nucleus and the cytoplasm of the host cell is shown in a figure below, 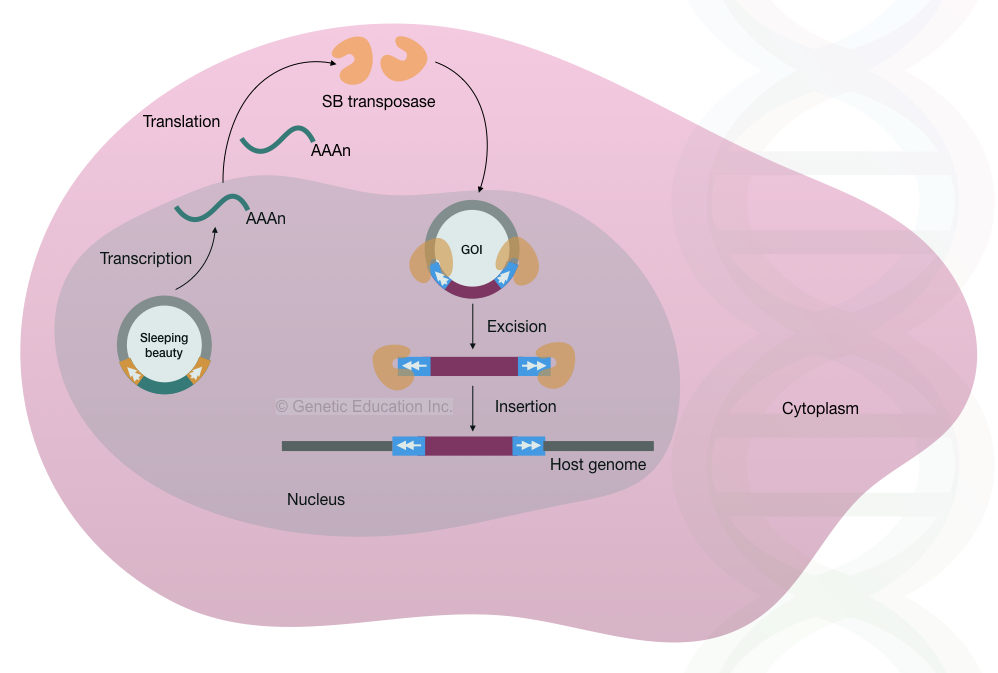 Now, the transposase migrates inside the nucleus vis the NLSD and binds to the terminal repeats of a GOI.

It generates a double-stranded cut and excised the GOI.

In the next step, the transposase protein creates two single-stranded cuts in a host DNA and inserts a GOI at that site.

The gaps are then filled by the polymerase enzyme and a gene of interest is inserted into the host genome.

The cells having a new gene are cultured and transfected back into the organism. The entire mechanism is shown in the figure below, 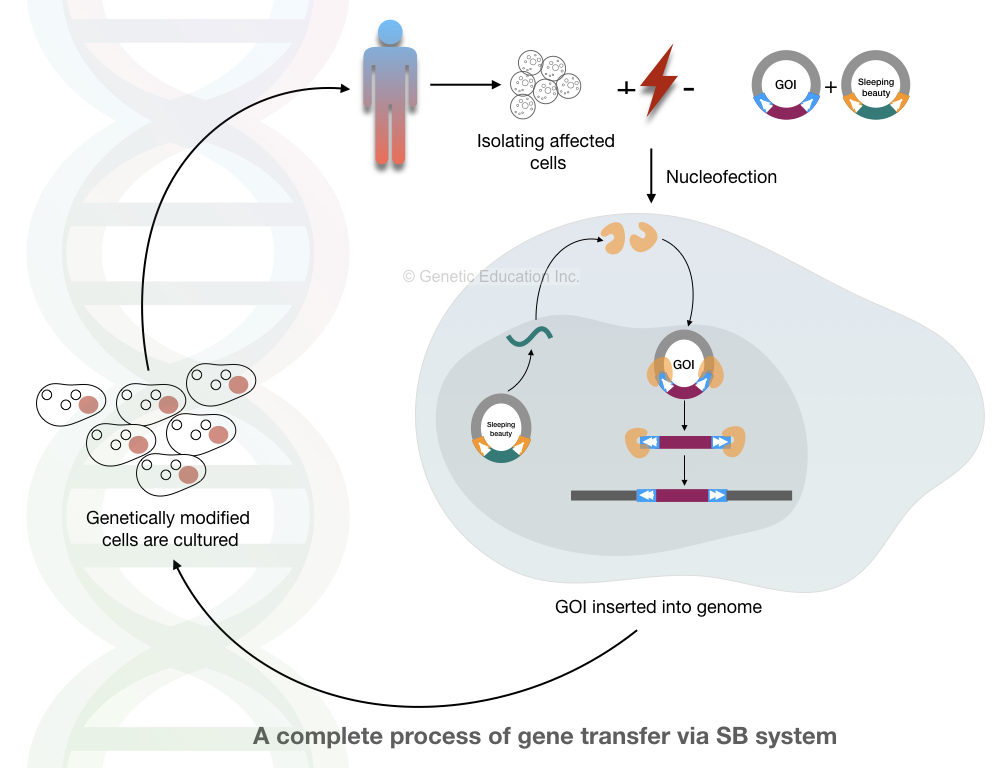 This is a quick protocol which gives you an idea about how the actual process happened in the lab.

Perform co-transfection of SBT vector and expression vector by using any of the non-viral methods.

Use 1:10 ratio of SBT vector: expression vector for better results.

Prepare the DNA insert using the polymerase chain reaction and purify it.

DIgest the multiple cloning site of a vector using a specific restriction endonuclease.

Insert the GOI (the PCR product) in the plasmid and ligate it using the ligase enzyme (T4 DNA ligase is most recommended).

Perform a transformation reaction and transform plasmid into the Ecoli cells.

Culture the cells on the agar plate containing one of the antibiotic resistance (generally ampicillin), incubate plates at 37℃ overnight.

Select transformed colonies and grow on the separate agar plate.

Isolate the plasmid from the bacterial culture. Now we can use this plasmid for the transposition.

This is a general protocol that can vary from the manufacturer to manufacturer. The exact concentration of each component is given into the manual of the service provider or manufacturer.

Importance of the SB system:

They are able to infect the host cell, replicate there and become lethal for the cell.

Furthermore, the use of live organisms (if viruses are considered as living) for gene therapy is ethically restricted due to some social and regulatory issues.

Contrary to this, the transposons are moving genetic elements that can move from one place to another carrying some host DNA sequence.

The importance of “the sleeping beauty transposon system” is unmatched over the traditional viral-mediated gene therapy.

It is safer than virus-based gene therapy.

Gene editing through the CRISPR-CAS9 is a tedious job, the SB system based gene editing is simpler yet effective.

The SB system not only insert a gene into a specific location, but it can also disrupt the DNA sequence.

It can even generate breaks and gaps at a specific location.

By introducing the transposons at the nearer place of the active gene, the expression of a particular gene can be maintained or altered.

The SB system is one of the powerful and effective than traditional gene therapy.

Because of these reasons, it is awarded as a “molecule of the year” in the year 2009 by the International Society for Molecular and Cell Biology and Biotechnology Protocols and Research (ISMCBBPR).

Advantages of the SB system:

One of the biggest problem, the sleeping beauty transposon system solved is the safety issue. The viral-mediated transposition is risky and hazardous.

The setup of the SB is relatively simple, no extensive instrumentation systems are required.

The cargo capacity of the SB is nearly ~7.5kb to 10kb. If it is combined into the BACs, it can even transpose 100kb sequences of a transgene.

It is used for the wide varieties of the cell types. Moreover, it is capable of transposing even non-dividing primary cell types too.

The transgene expression of the SB system transposon is efficient and stable.

The sleeping beauty system is so effective that it can transfer the gene intact, without losing a single nucleotide, even a complex transgene can be transferred accurately.

The present method of gene transfer is relatively cheaper and faster.

The SB system is so safer that it can not trigger the adverse immune response in the host cell as like other non-viral and viral methods.

It is a futuristic gene therapy and gene transfer technique.

Using a site-directed mutagenesis process, insertional mutagenesis can be induced at a location near the functionally active gene and the gene can be inactivated. This method is employed to prevent cancer.

A cancer gene can be “knocked out” using an SB mediated mutagenesis.

It can reprogram the somatic stem cell by removing a faulty gene with a new one.

The SB gene therapy model can be applied in the diagnosis of age-related macular degeneration and Alzheimer’s disease. However, the trials are now in the pre-clinical phase.

It follows a “cut and paste” mechanism of transposition.

Some of the external reads:

The sleeping beauty transposon system is now under the pre-clinical stage, Yet it is a promising and most powerful tool that can be a cost-effective alternative of gene therapy.

Although random integration is one of the major problems, it’s power is unmatched. In future, the SB system can be utilized for the diagnosis of inherited genetic disease.