“The site-directed mutagenesis is an artificial (in vitro) technique for introducing mutation or alteration into the target (known) DNA sequence.”

In simple words, we can say that

by using artificial techniques such as PCR a mutation or alteration can be inserted into the target-DNA sequence of our interest.

Here in the present article, we are going to discussing different methods of introducing mutations or performing site-directed mutagenesis into the DNA, Why to do it and that is the purpose of it.

Before the study of Charles Weissmann, chemical analogs and radiations like mutagens are used to create alteration into the DNA sequence, however, those changes are random and not site-specific.

In 1974, Michael Smith and Clyde Hutchison had performed site-directed mutagenesis using the primer extension method. They had achieved artificial mutagenesis at a specific location the very first time in the history of genetics.

The DNA polymerase (high fidelity) extends the growing DNA strand having the new mutation. Now the gene of interest is transferred into the plasmid for further downstream research.

Mutations such as SNP (Single nucleotide polymorphism), deletion & insertion of few nucleotides are commonly used for SDM. In the final step, DNA sequencing screens the present or absence of mutation in our DNA.

Various ways, for instance, nested PCR, inverse PCR, or conventional PCR amplification are used to do mutagenesis. Here, no fancy methods or fluorescent chemistry is needed.

But why do we have to do site-directed mutagenesis? What is the significance of doing it? let see some important uses of present methods.

The site-directed mutagenesis is used to remove the restriction sites. Restriction digestion is a process in which the DNA having the recognition site for a particular restriction endonuclease is cleaved into fragments.

Next, the modified sequence is transferred into a plasmid and then again, restriction digestion is performed to validate whether the recognition site is removed or not.

But if the DNA of our interest contains the restriction site, the restriction endonuclease cleaves the target DNA as well the rest of the plasmid DNA which indicates experimental failure.

The funda is simple, if we introduce any mutation at a RE recognition site, the enzyme can’t identify it and can’t cut it. This can only be done using the site-directed mutagenesis.

Next, it is practiced to analyze the structure and function of the protein. The method is powerful enough to study the function of a protein formed by a gene.

Also, one important function of site-directed mutagenesis is in the study of gene editing or gene manipulation. Through gene manipulation, the activity of a particular protein can be determined as well.

Besides these important applications, the method is often practiced to study protein-protein interaction, enzyme alteration, and enzyme silencing studies.

We have enlisted three common approaches to do site-directed mutagenesis:

The conventional PCR method is one of the most popular and easy methods for site-directed mutagenesis. The set up is simple; short, single-stranded oligonucleotide primers are designed in such a way that possess the mutation we wish to study.

The Taq DNA polymerase used in the conventional PCR does not have the exonuclease activity hence it cannot identify mismatch during the amplification. If the mutation is minimal enough to incorporate, the primer binds to the DNA having mutation.

Over a period of some amplification cycle, the original DNA sequence is replaced by the DNA sequence having a mutation. The major recommendation for the conventional PCR based mutagenesis is to insert mutant bases up to several limits at the 5′ end of the primer or in the middle of the primer.

From the 3′ end, the Taq polymerase expands the DNA. So the chance of reaction failure is higher there.  Another limitation of the present method is that it carries mutant as well as nonmutant DNA (mixed types of DNA) due to the presence of template DNA.

Hence the yield of the conventional PCR based site-directed mutagenesis is lower.

For more detail on conventional PCR, read the present article: A Complete Guide of the Polymerase Chain Reaction.

Note: Instead of Taq DNA polymerase, we can use the high fidelity DNA polymerase. But for that, the experimental assay is totally different. Further, the Taq DNA polymerase can be utilized in the conventional PCR approach only and has the power to alter only 2 to 3 nucleotides.

The overview of the present method is shown in the figure below,

The inner forward primer is 3 and the inner reverse primer is 2.

The location of all four primers are shown in the figure below, 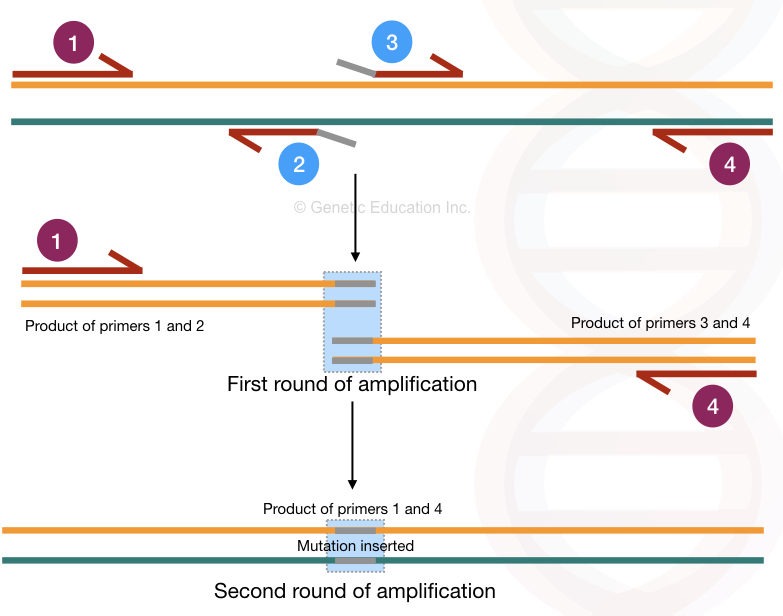 Here, the inner primer 2 and 3 contain the mutation/ mismatched bases at the end. The amplification process in the nested PCR is completed in two rounds of amplification.

In the first round of amplification, primer 1-2 and primer 3-4 creates two different PCR products.

primer 2 and 3 are mutant primer sequences therefore in two different PCR products, two different mutations are incorporated.  In the second round of amplification, the primer 1 and 4 amplifies the entire DNA sequence having the desired mutation.

In the inverse PCR, the primers amplify the fragment other than the target sequence. Which means,  it amplifies in the reverse orientation.

The method is used for inserting mutation into the plasmid having a gene of our interest. The high fidelity DNA polymerase is used to do the amplification as well as to linearise the circular plasmid DNA. Once the mutation is inserted, the 5′ phosphorylated end of the primers allows the ligation of the linear DNA.

By the intermolecular ligation, the plasmid is then recircularized. The present method relies on the flanking region amplification thus it is used so often in deleting sequences from a plasmid. See the figure below, 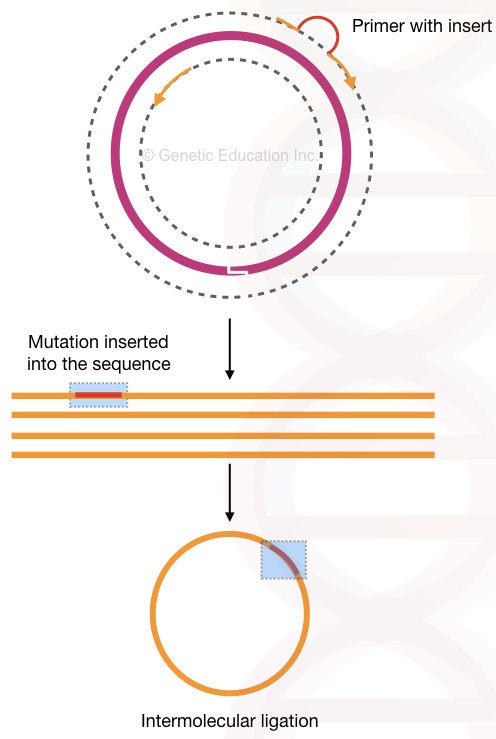 We can delete many nucleotides by using the inverse PCR method. See figure below for deletion by inverse PCR, 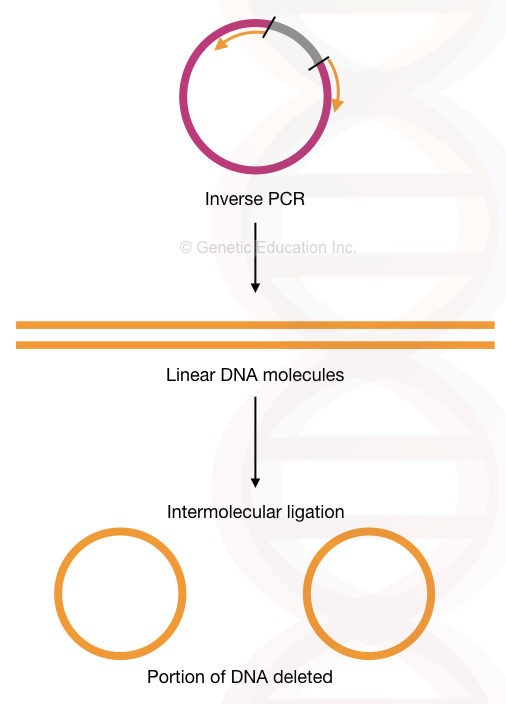 Here, our template is always a circular plasmid DNA because we want to study the gene of our interest, present in a plasmid. Read more on plasmid: Plasmid DNA- Structure, Function, Isolation and Applications.

The concentration of the plasmid DNA must be between 0.1-1.0 ng/μl and it must be highly purified.

Use a plasmid purification kit to purify the plasmid DNA.

If the GC content of the plasmid is higher, use DMSO in the PCR reaction.

The polymerase used in the site-directed mutagenesis must be special and different from the conventional one. Here, instead of normal Taq DNA polymerase, use high fidelity DNA polymerase.

Also, polymerase does have the 5′ to 3′ polymerase activity. DNA polymerases such as Pfu, Vent, and Phusion facilitate a higher amplification rate in site-directed mutagenesis. The Taq DNA polymerase is only used in the conventional PCR based method for introducing mutation.

Also, the primer used in the site-directed mutagenesis does not have repetitive sequences and secondary structures.

3 base mismatch is tolerable in the ideal 22 to 25 nucleotide long primer.

Now, this is something very important.

Therefore, the template DNA having not the mutation is removed from the reaction (because it is methylated). Only the mutant DNA remains in the reaction. See the image, 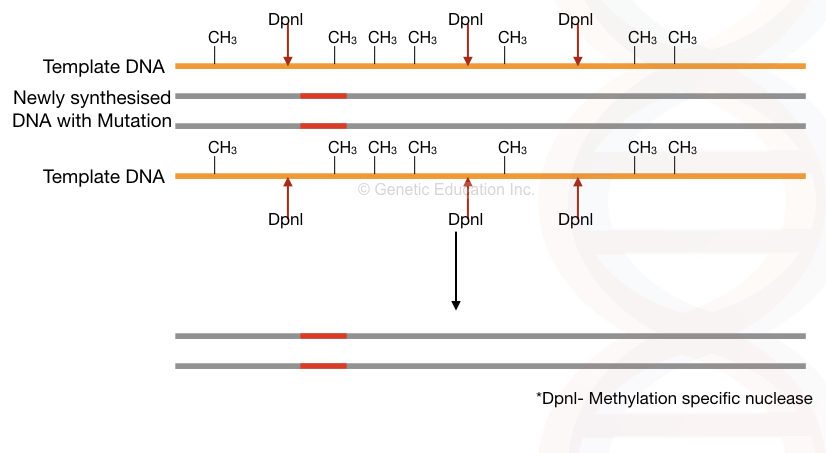 The image shows the Methylation-specific nuclease activity which cleaves the methylated template DNA.

A general outline of the SDM:

The experimental set up is explained here:

Read our articles on, 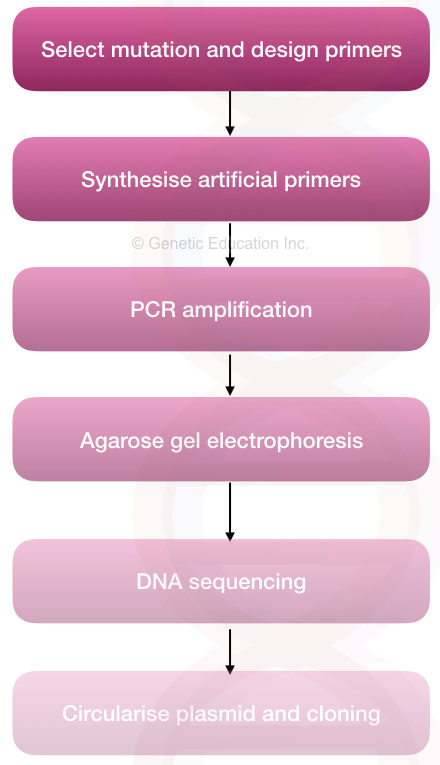 Key to success: Use of endonuclease, selecting a primer set, and designing primers are three important hacks to success in mutagenesis.

Role of site-directed mutagenesis in the CRISPR-CAS9:

Any point mutation can be introduced in vivo with the help of the CRISPR-CAS9 system into the genome of a model organism.

Here, in the CRISPR-CAS9, the CAS9 is the nuclease which is used to cleave the DNA. Once it induces a double-stranded break, the mutation is inserted through the homologous-direct repair.

Read more on the homologous-direct repair (HDR): What is gene editing and CRISPR-CAS9?

The site-directed mutagenesis helps to improve the quality of the protein by removing harmful elements from it. These genetically modified proteins have high commercial values.

The tool is adopted in the study of gene characteristics. Gene properties, a protein encoded by it, and post-translational modification are studied.

The method is the first choice in gene synthesis and gene-editing technology.

It is used in cloning as well.

It is also useful in the screening of SNPs as well.

Site directed-mutagenesis has its own importance in the field of gene editing and gene manipulation. It facilitates improvement in the wild type genotype to produce a commercially important phenotype. Notably, the use of nuclease is crucial to get success. site-directed mutagenesis is used in the knockout mice construction and gene knockout studies too.