“Electrophoresis is a common genetic lab technique used to separate charged particles such as DNA based on the size of the particle.”

Electrophoresis determines the size of the DNA. Moreover, techniques like Polyacrylamide gel electrophoresis-PAGE is practiced not only to separate biomolecules but also to do DNA sequencing.

The process of DNA sequencing and result analysis are now fully automated.

In the early 19th century, Johann Wilhelm Hittorf et al. stated that “Under the influence of the electrical field, smaller organic ions can move through the aqueous solution and it is helpful in measuring properties and behavior of ions as well”.

This was the first evidence of electrophoresis reported.

After several years, Arne Tiselius, a Swedish biochemist first published a paper on the complete process and apertures of electrophoresis in 1937. Later on in the year 1948, he was awarded the Nobel Prize.

The present topic is all about electrophoresis, one of the traditional trusted and widely used molecular genetic techniques. We are going to discuss various aspects of gel electrophoresis, its principle, procedure, application, apparatus, and result analysis.

But before going into the topic we have to understand the brief idea behind the gel electrophoresis and how it works.

The brief explanation is as stated,

The DNA molecules are separated on the basis of their charge and size. As the concentration of agarose increases, the size of pore will decrease and vice versa. Therefore, the larger molecules cannot run faster in comparison with the smaller DNA fragments.

The smaller fragments appear nearer to the positive charge (migrate faster towards the positive node), consequently.

Once the electrical current passes through the gel, the DNA starts moving towards the opposite electrode.

A tagged fluorescent dye such as EtBr used to visualize DNA bands. Another dye named DNA gel loading dye monitors the migration of DNA by running ahead of it. Furthermore, a known molecular weight DNA marker is used to calculate the exact DNA size.

Once the DNA reaches a sufficient distance, the process is stopped to protect the DNA running out of the gel.

The process of separating and characterizing molecules based on their size and charge is known as electrophoresis.

“Under the influence of the constant electrical current, the charged particle can move in a liquid or fluid medium, the entire process is known as electrophoresis.”

In short, electrophoresis is a process to identify, separate, and characterize the biological molecules like DNA, RNA, or proteins.

For example, if we want to separate DNA fragments with the difference of 5 to 10 bp, PAGE gives the best result, here the standard horizontal gel electrophoresis can’t be applicable.

In this section, we will discuss on the utilities, principle, time duration, procedure, preparation, and protocol of agarose gel electrophoresis.

The hypothetical representation of agarose gel electrophoresis equipment is shown below, 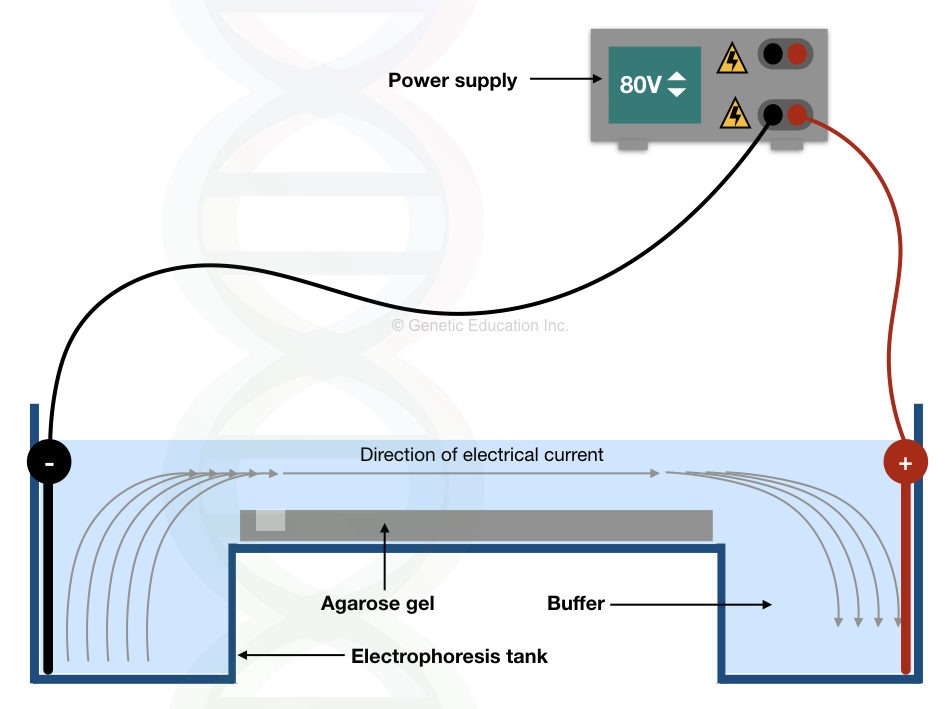 Graphical representation of the electrophoresis apparatus.

Three of the important factors that affect DNA migration rate are,

As we discussed earlier if the concentration of agarose is lower, the DNA can migrate easily and faster and vice versa.

The supercoiled DNA migrates faster than the linear DNA and circular DNA.

The supercoiled form of DNA is more compact than other forms and this is the reason for its speedy migration.

If the size of a DNA is larger, the migration rate of it is lower and therefore PCR product of several hundred base pairs migrates faster than the total genomic DNA. 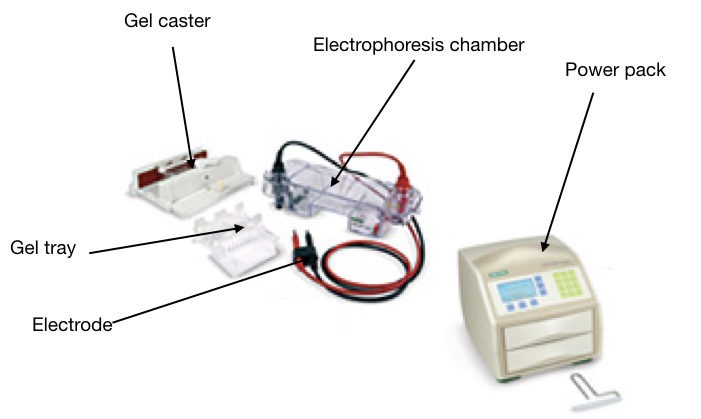 Agarose is a polysaccharide extracted from the seaweed.  A long-chain (polymer) of agarobiose creates the agarose sugar. Agaropectin is removed from the agar to form agarose.

A linear agarose polysaccharide is made up of the monomeric unit of D-galactose and 3, 6-anhydro-L-galactopyranose disaccharide.

The agarose powder is only soluble in the water on boiling. After cooling, it undergoes hydrogen bonding (cross-linking) which results in polymerization. By forming hydrogen bonds between adjacent molecules, it creates a three-dimensional matrix of pores.

Higher the cross-linking lower the pore size and vice verse.

The size of the pores varies as the concentration of agarose in the gel varies. The pores create a channel in the gel from where the DNA can migrate.

The smaller molecules migrate faster than the larger molecules and therefore distinct DNA band patterns based on their size are observed.

After the gel is settled down, the clamps are removed and the gel tray is transferred to the agarose chamber (which is filled with agarose gel electrophoresis buffer).

The wells are formed with the help of a gel comb in which the DNA sample will be loaded. The positive and negative electrodes are attached on each side of the gel electrophoresis chamber.

The comb placing is shown in the figure below, 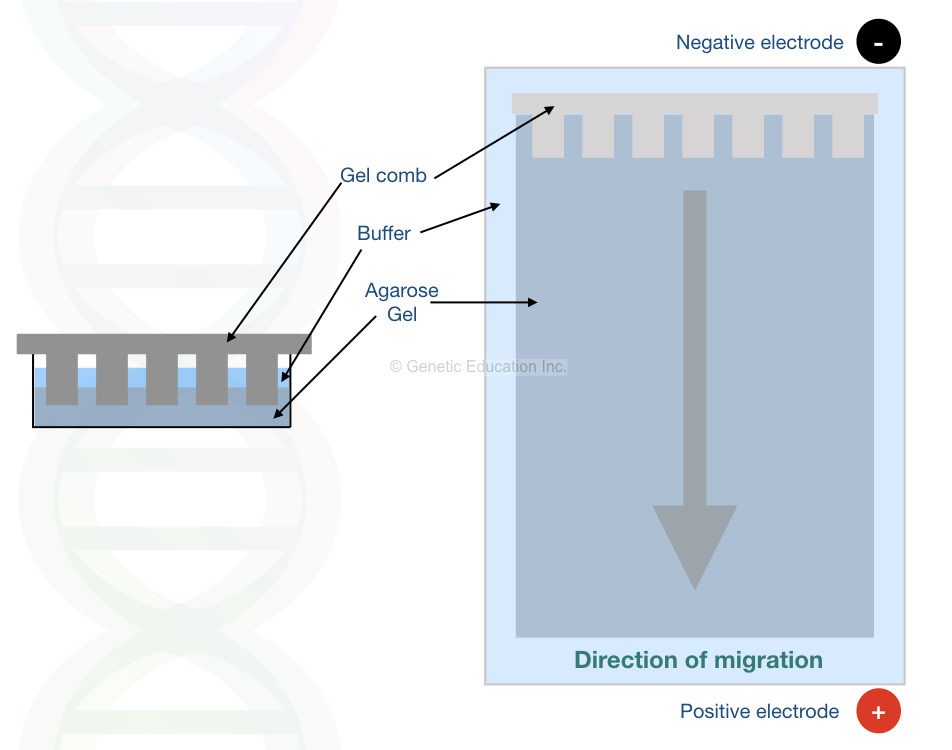 The buffer works as a liquid medium to migrate DNA well into the gel. The two most common buffer systems used in the electrophoresis are TAE (Tris-acetate EDTA) and TBE (Tris-borate EDTA).

To this, one of the main advantages of the electrophoresis buffer is its capacity to maintain the pH of the medium.

The borate present in the TBE buffer can react with the glycerol of the DNA gel loading dye therefore not the TBE but TAE buffer is usually the first choice to do electrophoresis.

Note: use only a single type of buffer for both gel preparation as well as tank filling.

If you want to learn more about agarose gel electrophoresis buffer, please read our previous article: The present article is also ranked high in the google search.

DNA gel loading dye contains Bromophenol blue and glycerol. It is used in monitoring DNA migration in a gel. During the process, the dye runs ahead of the DNA so that we can measure the distance covered by DNA in a gel.

Also, the glycerol present into the DNA gel loading dye provides density to the DNA which makes DNA settle at the bottom of the well.

Ethidium bromide is a fluorescent dye used for tagging DNA. DNA does not have its own color, EtBr intercalates with the DNA bases and gives fluorescent color under UV light.

We have covered an entire article about how EtBr intercalates with DNA, properties of EtBr, how to use EtBr and it’s important. Read the article here: Role of EtBr in agarose gel electrophoresis.

Both electrodes are attached to the power pack. We can run DNA on 50v, 100v, or 120v depending upon the type of DNA sample.

The entire procedure of agarose gel electrophoresis is divided into 6 parts:

To separate PCR fragments 2% agarose gel is recommended. To prepare a 2% agarose gel, weigh 2.0 grams of agarose powder and put it in a flask.

Add 100ml of 1X TAE buffer (or TBE) in the flask and shake well until the agarose powder will mix into the buffer.

Caution: Hot surface!! Care must be taken while heating gel in a microwave oven. If possible take necessary training before doing this.

Carefully remove the flask from the oven and place it for some time until it becomes touchable.

Now add, 0.5μg/ml EtBr and shake well to mix it properly, (shake it gently so that bubbles cannot be formed).

Place the gel tray on a gel caster and tighten it with the help of clamps. Put the gel comb on the gel tray.

Pour the gel into the gel caster and wait until it becomes solid.

Place it under some cool environment or you can also place it in the freeze to settle it faster.

Now fill the remaining buffer, until the gel is covered by the buffer.

Take DNA samples and place them in sequential order and add BPB into it or mix it on the parafilm.

Now carefully take 10μl of a sample and pour it into the well. Remember, do not break the gel while loading the sample.

Load every sample, orderly. Lastly, load the DNA ladder. You can also load the DNA marker or ladder in the first position.

Connect the electrodes to the power pack and run the gel at 100v for 45 to 60min. Run the samples until the DNA covers a 75% distance towards the positive node.

Red is a positive node and black is a negative node.

remove the gel carefully, once the run is completed.

Run the gel until the bromophenol blue (DNA gel loading dye) reaches up to the edges of the gel. Turn off the power supply, carefully remove the gel from the electrophoresis chamber, and drain off the buffer.

Note: The EtBr is used to visualize the DNA.

Remember!! do not forget to wear gloves and eye-protective glasses, the Uv transilluminator emits UV light that can harm our skin cells. 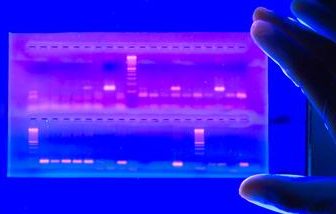 Turn on the UV light and the result will be observed as shown in the figure above. EtBr intercalates between DNA bases and emits fluorescent light. Orange colored DNA bands are observed under the UV transillumination.

A band is an accumulation of a DNA fragment of a similar type. The Know molecular marker,  known as the DNA ladder is used to determine the fragment size. 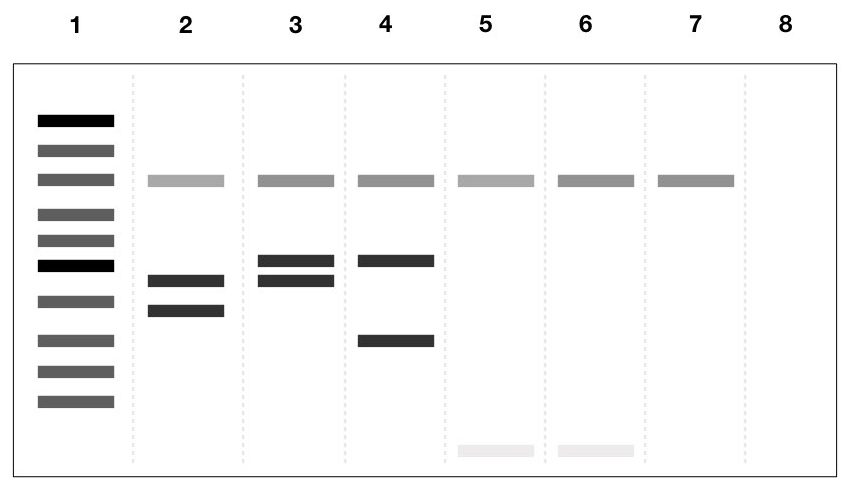 The graphical representation of DNA and DNA ladder bands into the agarose gel.

If your experiment involved some of the downstream applications such as cloning, you need to purify the DNA. For that, the DNA fragment is re-isolated or extracted from the gel.

We will discuss DNA purification through the gel in some other article.

The agarose gel electrophoresis is widely employed in molecular genetics, especially in PCR and PCR related techniques such as DNA fingerprinting, RFLP, AFLP, and RAPD analysis.

Agarose gel electrophoresis is commonly used in the diagnosis of several diseases such as thalassemia, sickle cell anemia, hemophilia, and cystic fibrosis.

Various mutations and alteration which are known to us can be encountered using the present method.

The present interpretation method is so useful but it has several limitations.

The use of current, carcinogens, chemicals, and heating steps, makes the present method unsafe and risky to use.

Moreover, we can’t determine the exact fragment size of DNA, it is just a rough idea.

The process is time-consuming and lengthy.

Furthermore, sequence information cannot be obtained by using it.

Some precautions are necessary for performing agarose gel electrophoresis:

I personally prefer Seakem agarose powder which is cost-effective and gives a beautiful result.

Can we make the electrophoresis instrument in our lab?  think about it and let me know in the comment box.

The agarose gel electrophoresis is an unmatched and non-replaceable technique until now. However, some of the other fast and more accurate options are now available but are so costly.

The entire process of electrophoresis is simple but each step carries a different type of risk, therefore, care must be taken every time while preparing or doing agarose gel electrophoresis.