“CRISPR-CAS9 is a revolutionary system of gene editing or genome editing that uses the guided RNA to cleave the DNA at a specific location in a genome.”

Why are we doing gene editing? What is the purpose to do so? The answer is to develop different genetically modified organisms and to treat several genetic disorders by inserting, removing, or deleting sequences from a genome of an organism.

It’s a tool for genetic engineering we can say, but more powerful than any other tools and techniques available. Here the CRISPR is a sequence of DNA and CAS9 is an enzyme that works together.

The first explanation of the CRISPR-CAS9 system was explained by Yoshizumi Ishino and co-workers in 1987.

Several steps to use the CRISPR-CAS9 system for gene editing and genetic engineering are:

The present type of system was first used in the techniques of a gene knockout in which the gene or the DNA sequence are removed from the model organism.

However, now it is used for various applications to insert and to remove genomic sequences from the genome of a model organism.

In the present article, we will discuss the entire process of the CRISPR-CAS9 system and how you can perform it in your lab, virtually. However, what we are discussing is totally different from the actual lab work.

We will try to explain each step in layman language so that you can understand it well. Instead of going more in scientific writing, I will try to write in a simple language.

Related article: What is gene editing and CRISPR-CAS9? 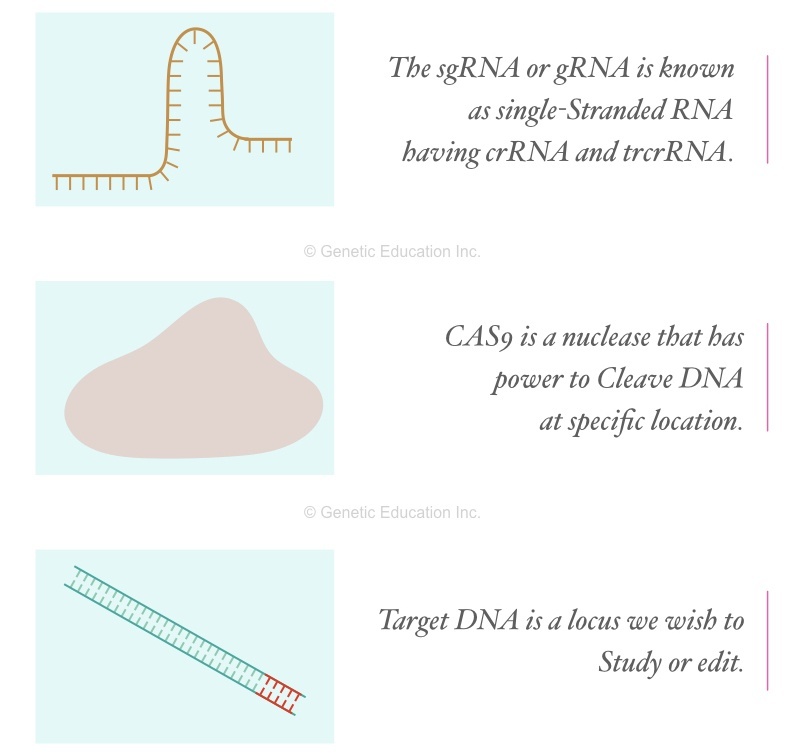 Elements of CRISPR-CAS9; the sgRNA, CAS9 nuclease and the target DNA.

Steps and Procedure of CRISPR-CAS9:

We can’t perform gene editing or genome editing on all organisms. Gene editing and genetic engineering techniques are restricted to perform on humans or other organisms.

For example the mice.

Selecting a gene or target location:

Select a region to silence or remove. This data will help us to design the guided RNA and locate the PAM sequence to edit a gene.

Not all the CRISPR-CAS9 system can work for all the manipulations. For example, to perform a knockout experiment we have to select a nickase CAS9. Some of the CAS9 systems are enlisted below

Some of the others are Cas13, Cas12, Csm, Cmr and RNase III. Different companies have different nomenclature for their own CAS protein.

Conclusively we can say we have to select the CAS9 and CRISPR sequences based on our experimental requirements.

The CAS is a class of protein known as the nuclease having the power to cleave single-stranded as well as double-stranded DNA.

Selecting and Designing the sgRNA:

sgRNA or gRNA is the short RNA sequence that allows gene editing by targeting a specific location. In the next step, we have to design the synthetic sgRNA, based on the sequence information we wish to study.

Shortly I am explaining what a sgRNA is!

The sgRNA is a single-stranded RNA known as a guided RNA having a complementary sequence to our target location. It is made up of two parts; the crRNA that has the complementary 20 nucleotides and the tracrRNA having the loop that recognizes the CAS9.

Once the tracrRNA part identifies the CAS, it guides the nucleus to the site of cleaving.

We need to design the sgRNA computationally. First, based on the location of the PAM sequence, the sgRNA binding site is decided, usually, upstream to the PAM.

We have covered an amazing article covering the whole process and tool to design the sgRNA. Read it here: sgRNA- definition, mechanism and designing.

Once the gRNA is designed, synthesize it and clone it in a plasmid.

Synthesizing and cloning of gRNA:

We have now state of the art facilities to synthesize the oligos of the gRNA or sgRNA in vitro. But we have to prepare a stock or clone of it. To do so, select the specific plasmid, inset the gRNA gene in it and develop several clones of it.

After that, isolate the gRNA expressed from the plasmid. Also by in vitro transcription, the sgRNA can be synthesized. Once our gRNA is synthesized, CAS9 is ready to manipulate the gene of interest. 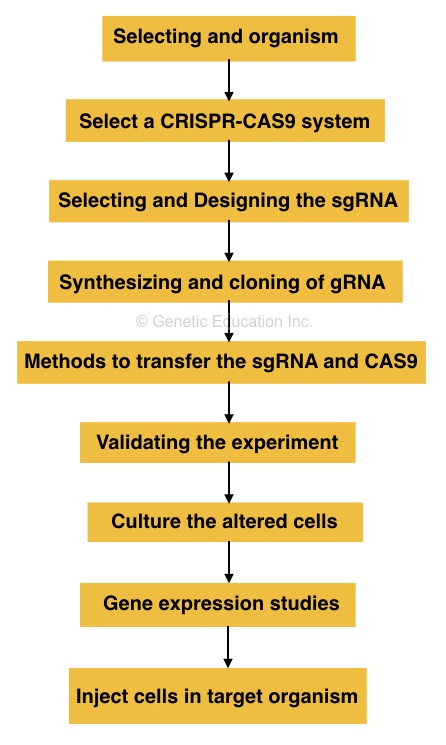 Methods to transfer the sgRNA and CAS9:

The electroporation method is widely used to insert the CAS9 and sgRNA to the target cell. Under the influence of the current, pores are created in a cell that allows the nuclease and sgRNA into the cell.

Also, instead of CAS sometimes, mRNA specific to it or a gene is inserted to form a CAS9 in a host cell. Because it is very hard to insert a CAS like larger molecules.

However to perform the transfection mediated by the viral vector use mRNA specific to the CAS. The virus itself forms the nuclease protein.

Other CRISPR-CAS9 delivery systems are the microinjection, gene gun, sonication and chemical modifications.

To know if the knockout is performed accurately or not we should have to validate it. For that, we can use the polymerase chain reaction, in vitro transcription or DNA sequencing.

Sequence DNA prior to the experiment and after the completion of the experiment, and compare it. If the gene knockout is correctly performed some nucleotides are removed from the original sequence.

Also by amplifying the modified cells DNA by PCR we can validate the experiment.

Now we have a cell line of the altered cell which is genetically modified. Culture the cell line in aseptic conditions and using appropriate culture media. Once sufficient amounts of cell lines are obtained, insert it into the target organism or organism we had selected for the experiments.

Note: don’t judge scientifically, it is just a simple explanation of the entire CRISPR-CAS9 mechanism.

How does the gap fill?

We have broadly discussed the process of knockout experiments in which we have removed several sequences. But a gap generated by the CAS9 nuclease activity can’t remain unfilled.

A cell’s DNA repair mechanism repairs the DNA or fills the gap by either Non-homologous end-joining or by direct DNA repair. Here the DNA polymerase fills the gap with nucleotides while the ligase forms the phosphodiester bond to fill the gap.

But, wait for a minute!

The story does not yet end here. We should have to perform several experiments to check the status of our altered cells.

We have to check the expression of an altered gene in all cell lines. Suppose we have inserted some DNA sequence, It will give us an idea about whether it is expressed in all cells or not!

RT-PCR or quantitative PCR is performed to check gene expression. Here the mRNA is isolated from the cell line, reverse-transcribed into cDNA, and quantified in a PCR.

If you want to learn more on gene-editing and CRISPR-CAS9, you can read our previous article on this topic:

What is gene editing and CRISPR-CAS9?

Briefly, this is the whole process of how a standard CRISPR-CAS9 experiment is conducted in a genetic lab. However, the specificity of the results depends on which system we have selected.

If we select the wrong CAS9, we can’t get the desired results. Also, sgRNA plays a crucial role in editing as well.

The sgRNA is not designed carefully if, It will cleave untargeted regions in a genome. Therefore, which system we are selecting decides what we get!

If you are interested to learn more about the CRISPR-CAS9 system. You can read this article of Addgene: CRISPR guide.

What is sgRNA? – Definition, Designing and Advantages

10 Proven Tips to Success in Gel Electrophoresis of DNA