The process of cleaving DNA at a particular location with the help of the specific type of restriction endonuclease enzyme which helps in mapping, polymorphism study and studying mutation called as restriction digestion.

Furthermore, we will interpret and analyse the results of the restriction digestion.

Nathans, Smith and W. Arber were awarded Nobel prize in 1978 for discovering the endonuclease.

Interestingly, the phenomenon of endonuclease in bacteria was first explained in the 1950s by Salvador Luria and Giuseppe Bertani.

Around the era of the 1980s, the idea of cutting DNA with the help of the specific type of endonuclease was more clear and due to this the era of the genetic engineering was evolve. different techniques of genetic engineering such as gene editing, CRISPR-CAS9, genetic manipulation, DNA sequencing and DNA microarray was simultaneously evolved as we.

What is DNA digestion?

The process of cutting or cleaving DNA into smaller fragments with the help of the chemicals, physical and enzymatic methods are called the process of the DNA digestion.

The process of the DNA digestion creates mutation into the Genome. UV radiation, gamma rays, Heat and centrifugation are several physical methods which cut DNA vertically as well as horizontally.

Whereas, Hydroxyurea, camptothecin are chemicals that cut DNA horizontally.

Nucleases such as endonucleases and exonuclease are the enzyme used to cut the DNA, however, it cuts DNA vertically.

Protein digestion is another method in which the complex molecules of the proteins are digested with the help of the special type of the enzymes such as trypsin, chymotrypsin and pepsins.

These enzymes cut the bonds between the amino acids and release the complexity of the protein molecules.

What are the nucleases?

Nucleases are the special types of enzymes (made of the proteins) which has the ability to cleave DNA at a specific location. The location at which the nuclease recognises the DNA is named as recognition site whereas the cutting site is called a restriction site.

The recognition site is the sequence on the DNA which is identified by the nuclease for the nuclease activity. Two types of nucleases are most common viz, exonuclease and endonuclease.

On the other side, the endonuclease is the types of a nuclease which cut DNA specifically at any position into the whole genome (at where its recognition sites are located).

What is restriction digestion?

The restriction endonucleases are involved in the bacterial and prokaryotic defence mechanism and hence the restriction digestion too. The virus and phages always target bacterial DNA.

The endonuclease attacks the foreign DNA and cleaves the phosphodiester bond between the adjacent nucleotide on both the strands. See the figure, 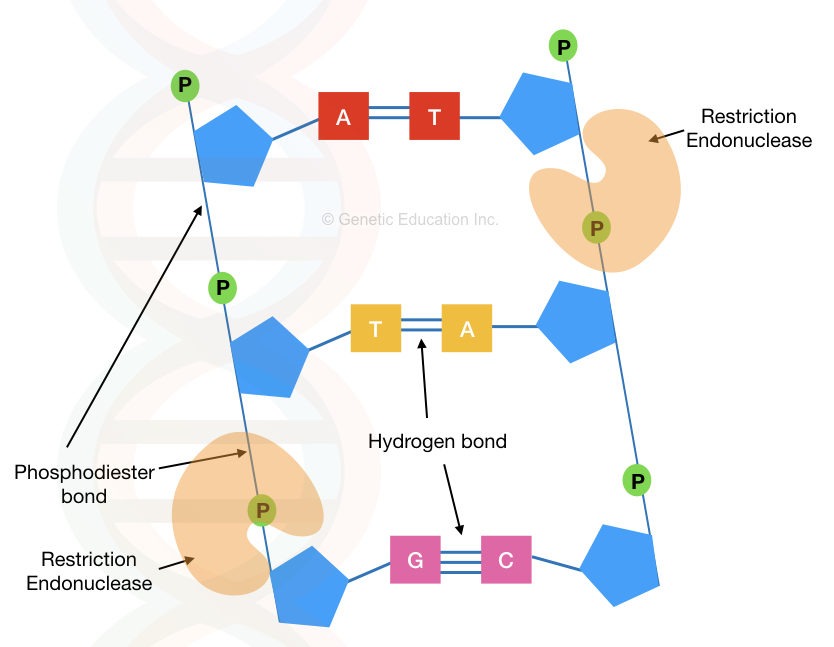 Numerous REase attacks numbers of different sequences present into the foreign DNA and protect the bacterial DNA from the attacks of the phages and other viruses.

Interestingly, a question arises in your mind that the DNA is the same in all organisms than how the bacteria protect their own DNA from the REase attacks or can REase of bacteria kills their own DNA?

The answer is yes it can kill their own DNA but thanks to the methylation.

Here the process of methylation protects the bacterial own DNA from the nucleophilic attack. By transferring methyl groups to adenine or cytosine residues of the DNA of its own it produces N6-methyladenine or 5-methylcytosine.

Once the methyl groups added to the DNA sequence the enzyme cannot identify their recognition sequence and hence it escapes the digestion process.

The recognition sequence of the REase are mostly the palindromic sequences, complimentary in both sense and antisense strand.

What are palindromic sequences?

The restriction endonuclease digestion system helps the bacterial own DNA from the phage invasion and from the other virus.

In vitro process of Restriction digestion

Humans genome is very big, millions of recognition site are present for one particular type of REase. Hence cutting one specific sequence in a whole genome is nearly impossible by REase.

Take look at the different types of cutting sites of the REase: 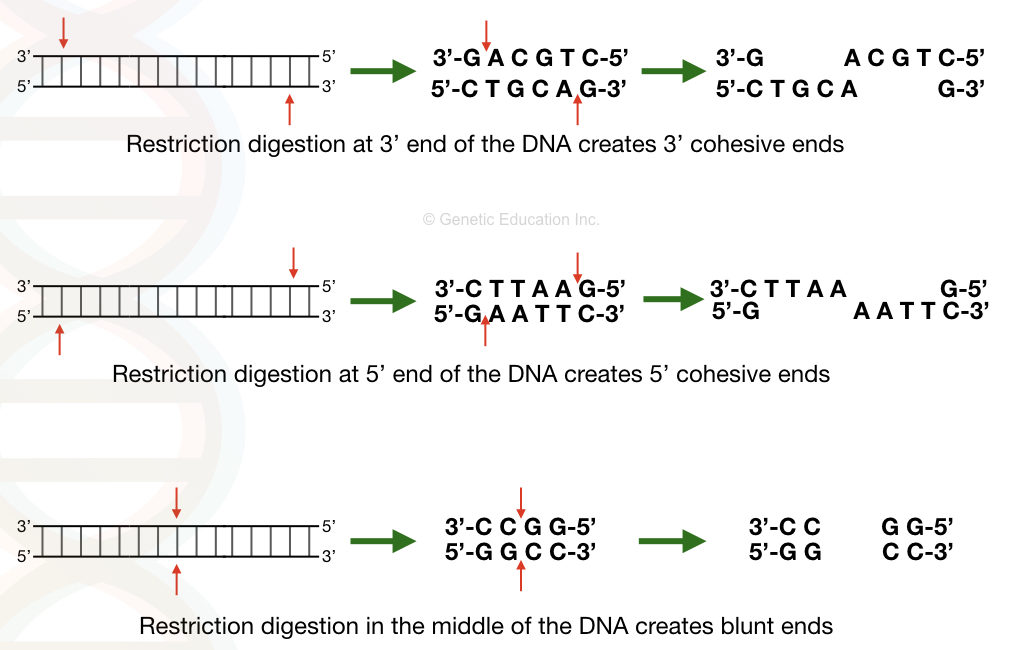 Choose one of the methods of DNA extraction and extract DNA with ~1.80 purity having a good quantity of DNA.

Now choose the sequence of interest which you want to examine or digest. Take that sequence and design primer with the help of the primer 3 software. You can also follow our guide for designing primers. Read the article here,

Now cut your DNA sequence with the help of the NEB cutter software and select the REase which generates only 2 or three fragments with the length more than 70 bp.

Suppose you selected EcoR1 restriction enzyme which cuts the DNA at 5’-GAATTC-3’. Furthermore, this sequence is present once in our DNA of interest.

Now with the help of the appropriate PCR protocol amplify the DNA by the selected primers. This will generate millions of copies of the DNA fragment of our interest (having the restriction site for the EcoR1).

You can follow our guide for designing the PCR reaction. The standard PCR protocol is as followed. After the amplification, run the product on 2% agarose gel for confirming the amplification.

After that, design the restriction digestion protocol as per the manufacturer’s protocol or you can follow our protocol. It is as simple as discussed here,

Now, incubate the sample at 37℃ overnight or 60℃ for 1 o 2 hours (if the enzyme is fast digest) or follows the instruction given by the supplier. After the incubation, our restriction digestion is ready for loading on the gel.

pH of the buffer: pH is a very important factor in any of the genomic procedure. The pH of the reaction or the buffer must be between 7.0 to 8.0 which protects the DNA. Also, the buffer must contain the Tris-HCl.

The water must be de-ionised, double distilled, nuclease-free.

The requirement of Ions: the restriction endonuclease are the enzymes and as we know, ever enzyme required ion as a cofactor to enhance their activity. Mg2+ ions are the essential need in any types of restriction digestion, however, other ions such as Na+ and K+ are also needed into the reaction.

Nonetheless, all the essential ions are present in the buffer.

Other factors: the DNA sequence must be methylation-free, or the site of enzyme recognition must be free form the methylation otherwise the enzyme can not cut the DNA.

Remember, All the plastic wares and glassware used during the restriction digestion must be autoclaved, nuclease-free and contaminant free.

The DNA must be free from the contamination such as phenol, chloroform, DMSO and ethanol. These contaminants lead to star activity of the enzyme.

[epcl_accordion custom_class=”class 1″ title=”what is the star activity of endonuclease?”] Under the non-standard conditions, the restriction enzyme cleaves non-identical, similar sequences other than its recognition sequences called as star activity. The specificity of the enzyme alters under some adverse conditions such as high pH, low temperature, high enzyme concentration, high salt concentration and in the presence of an organic solvent contaminant. The enzyme cuts DNA randomly into and nonspecifically. [/epcl_accordion]

[epcl_accordion custom_class=”Class 2″ title=”How to name restriction endonuclease?”] The name of the restriction endonuclease is given from the bacteria it is isolated. For example EcoR1. Here the bacteria is Escherichia Coli with the Genus Escherichia and species coli. The R came from the strain of the E.coli bacteria RY13 and 1 is the order in which this enzyme is isolated. [/epcl_accordion]

Now, our digested DNA product is ready. We have to analyse the results whether the DNA is digested or not.

Suppose we have two different alleles for one particular gene having a point mutation. The point mutation is a site of REase recognition indicates that in normal wild type allele the restriction endonuclease will cut the DNA and in the other allele, mutant allele, the REase can not cut the DNA.

The results of the experiment are shown in the figure below, 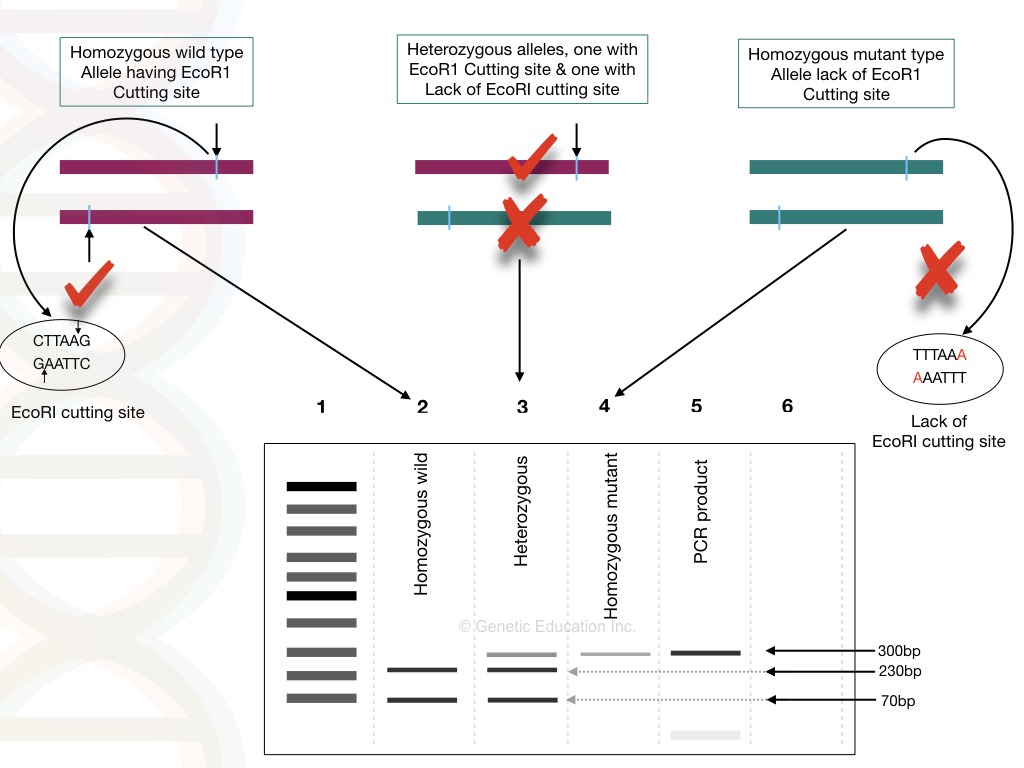 Suppose our PCR product is of 300bp and the EcoRI creates two fragments after digestion (one with 70bp and one with 230bp).

Therefore, in the homozygous normal alleles, having the cutting site creates two different fragments after the digestion. Both the fragments are shown into lane two.

In the case of the homozygous mutant alleles, both alleles lack the recognition site due to the mutation from G to A, hence the EcoR1 can not cut it. The uncut allele with a 300bp fragment is shown into lane 4.

In heterozygous genotype, one allele has the recognition site and one does not have it. Hence one allele is digested by the EcoR1 and one remains uncut. The three different bands with 70bp, 230bp and 300bp are shown into lane 3.

Also, the untreated PCR product is loaded into the 5th lane having the 300bp band of the DNA (as a control).

Suppose the normal allele in the population have the restriction digestion site, then in each case, the EcoR1 cuts the fragment into 70bp and 230bp, if remains uncut indicates the mutation. By doing this we can identify mutation at this site.

The method what we are discussed into the earlier part of this article is RFLP, restriction fragment length polymorphism. The method is the combination of polymerisation and restriction digestion followed by the agarose gel electrophoresis.

The RFLP, AFLP and STRP are the most common types of methods used into the research as well as in diagnostic which contains the restriction digestion.

In recent time, the Restriction fragment length polymorphism is most popular in disease diagnosis of single gene disorders.

The AFLP, amplified fragment length polymorphism is also of the important tool used in the plant research. Also, the short tandem repeat polymorphism is best applicable along with restriction digestion.

Other methods which use restriction digestion is mapping and cloning. We will discuss the cloning and mapping in one separate article.

Direct digestion is also one of the best methods for the digestion of the whole genome, it is used to creates the library for microarray and DNA sequencing.

The pathogenic mutant allele or new variations cannot be characterised by the restriction digestion which is the only limitation of it. For those who want to continue their carrier into genetics must learn the restriction digestion method. even if it is very basic, tradition and outdated techniques, in the era of gene transfer and DNA sequencing, one must learn traditional methods for gaining knowledge.

Since long and even in the future, the restriction digestion method remains a gold standard for single gene disorder and point mutation. it is easy, cost effective and fast.