In the inverse PCR, the amplification of unknown flanking regions of DNA carried out using the known DNA sequence primers.

Here, the unknown DNA sequence adjacent to the known template DNA is amplified using the primers which amplify the flanking (unknown) region near the know DNA template.

Quite difficult to understand?

In this present article, we will understand the mechanism of inverse PCR and its application in molecular genetics.

I bet you read the article till the end, you will understand the fundamental basics behind the inverse PCR.

What is an inverse PCR?

PCR is a technique in which the DNA is amplified using a set of the sequence-specific complementary primers in the enzymatic cyclic temperature dependent reaction.

Inverse PCR is just a variant of the conventional PCR. The inverse PCR method is originally developed by Howard Ochman and coworker in the year 1988.

Firstly we have to understand the basic difference between conventional PCR and the inverse PCR.

Now see the figure, in the conventional PCR, our target DNA is known to us, we have the sequence information of that.

depending upon that the primers are designed to amplify that know complementary DNA sequence. On two different single-stranded DNA, primers are bind and synthesised towards each other.

While in the inverse PCR, the region of the DNA is unknown. We do not have any information about what types of DNA is inserted into the genome.

However, we design primers complementary to the known DNA region but instead of extending towards each other, the primers extend DNA away from each other. See the above figure.

Restriction digestion is performed on the genomic DNA which digests only the unknown flanking regions but not the known DNA region.

ligating the flanking regions of unknown DNA generates circular DNA which is amplified using the set of primers.

Steps and procedure of inverse PCR:

The entire process of inverse PCR is divided into 5 steps: 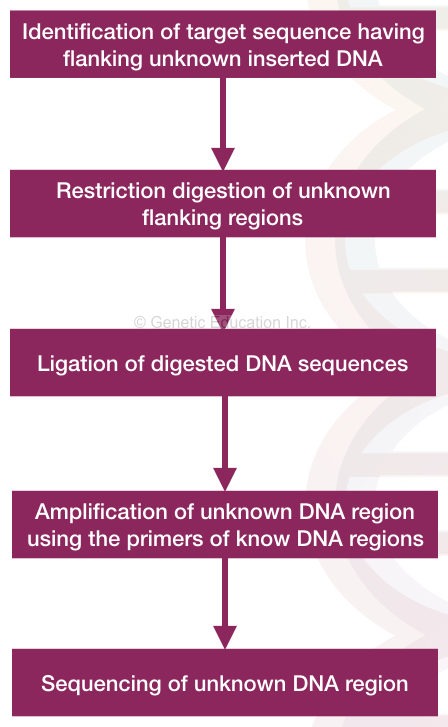 In the very first step, we have to identify the target. Inverse PCR is used for identification gene rearrangements, transposons and jumping gene studies. By identifying the known location near the unknown DNA region, design the primers complementary to the known DNA region helps to amplify the unknown region.

In the next step, extract DNA using any of the DNA extraction methods listed below,

After DNA extraction, quantify the DNA and check the purity of the DNA because the purity matters a lot in the amplification.

Store the sample in TE buffer at 4°C.

Restriction digestion is a process in which the DNA having the restriction site is digested using the known restriction endonuclease.

For more detail on the restriction digestion read our article: What is Restriction Digestion and how to do it?

Choose the endonuclease which can only cut the unknown flanking regions but not the known DNA regions.

If you doing it for higher eukaryotes, thousands of digested DNA fragments may be generated.

Ligation is a process in which the ends of the DNA are joined using physical means or by an enzyme. Ligase is the enzyme used to ligate two DNA molecules.

Here instead of enzyme-mediated ligation, The DNA is self-ligated using the intermolecular ligation. For that low concentration of digested DNA is used.

We can also use ligation assay using the ligase which is more preferable.

Now the ligated ends of DNA generates a circular DNA molecule shown into the figure below, 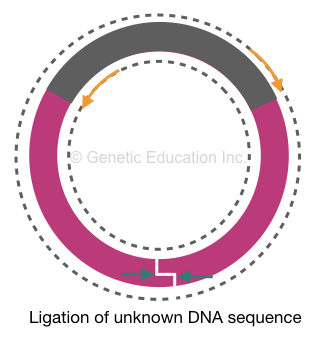 The template is ready for the amplification.  Here we can amplify the single template or both, it depends on us.

The unknown DNA fragment is now present between the two known fragments.

Interestingly, here the 3′ OH end of the primers are outward to the known DNA sequence.

With the help of the Taq DNA polymerase, the unknown region of the DNA is amplified.

5. Sequencing of the unknown DNA region:

Remember here we are doing amplification for obtaining a large amount of the unknown DNA amplicon, which type of sequence is inserted to the DNA is still unknown to us. For that, we have to do DNA sequencing.

After the inverse PCR, the amplicons are sent for DNA sequencing at where the nucleotide sequence of unknown DNA between the two know DNA region is determined.

Once it is sequenced, the sequence is cross-checked with other DNA sequences or with other genomes for checking the duplication, translocation or insertion.

In the beginning, before doing any wet lab work, design the primers complementary to the know DNA regions using the computational software.

Now extract the DNA using any of the DNA extraction protocols given above.

Use 5μg DNA for restriction digestion at 37°C for 12 hours. Heat the sample for 65°C for 20 minutes to inactivate the enzyme.

The reaction preparation for the restriction digestion is given into the table below,

*If the concentration of RE buffer is 10X use only 2μl of buffer for the reaction.

After that, extract again the DNA using the phenol-chloroform method.

Precipitate DNA with ethanol and if precipitates are less, add a pinch of sodium acetate. Now dissolve the DNA pellets into the TE buffer.

You can directly use the spin column DNA cleaning kit for cleaning the DNA sample.

With the help of the phenol-chloroform DNA extraction protocol or by the spin column DNA preparation kit, extract the DNA. If PCI is practised, precipitate the DNA with the ethanol and dissolve it in a TE buffer.

After that, quantify the DNA and use it for the PCR reaction.

The concentration of different components used into the PCR reaction for inverse PCR is given into the table below,

Place the PCR tubes into the PCR machine and set the protocol as given into the table below,

After the completion of the PCR, confirm the amplicons using the agarose gel electrophoresis.

Send the sample for DNA sequencing. We already have the primer information of the known DNA sequence and based on that the sequencing is performed for the unknown DNA which is now in between the know DNA regions.

The entire mechanism of inverse PCR is shown in the figure below, 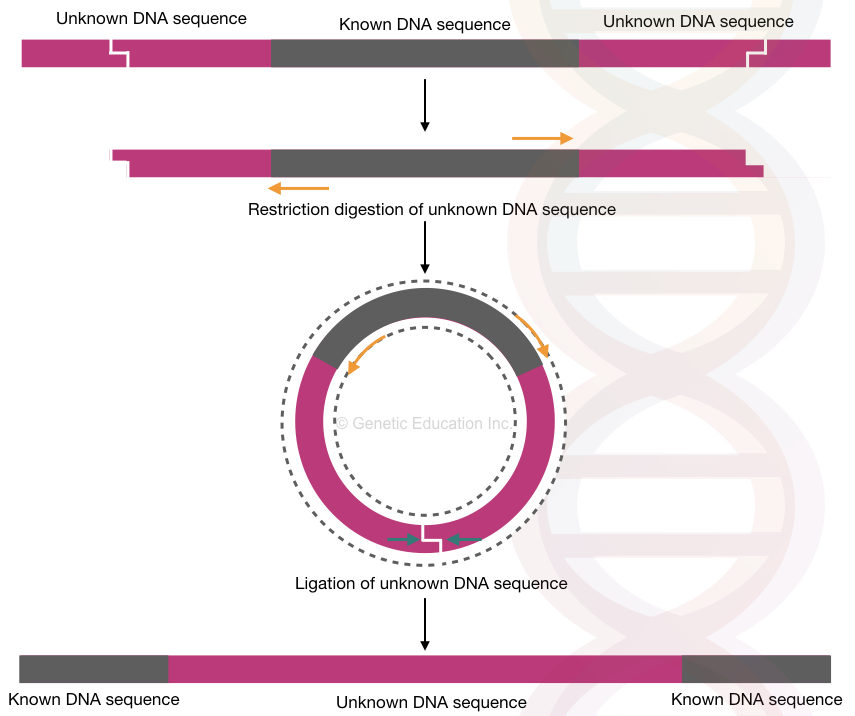 The inverse PCR is something very different than the other PCR modifications, why?

Now take a look at some of the application of inverse PCR:

Identification of unknown flanking regions. For example, the identification and investigation of promoter and enhancer regions of DNA upstream or downstream to the exon region can be possible by using the inverse PCR.

It is further useful in the identification of unknown mutations such as gene rearrangements, gene fusion, oncogenic gene arrangement on a chromosome.

The inverse PCR is the first choice for transposable element studies, identification and characterization.

You can also read our series of articles on transposons:

Although inverse PCR is a very novel method, still it is a time-consuming and tedious process. Restriction digestion and ligation assay take more time as compared to the conventional PCR.

Due to this reason, it cannot be used into the routine genetic diagnostic labs.

The technique depends on so many enzymatic steps, hence the chance of reaction failure is high.

The cost of the overall experiment is higher than the conventional PCR.

The inverse PCR method is different from other PCR techniques. The method is apparently more useful in a plasmid, bacterial and plant studies in which it is applicable in unknown gene segment detection.

Note: The range and the concentration of the components given into the articles may vary from lab to lab and protocol to protocol. It depends on the expertise of the researcher.

Also, the “ready to use kit” for the ligation assay and restriction digestion assay contains the manual on “how to prepare the reaction”, so don,t worry about it.