The primer dimer is a non-specific product occurred due to the hybridization of several bases of complementary primers during the PCR reaction.

The primer dimers are one of the most common problems of any PCR reaction.

The polymerase chain reaction is one of the most anticipated and undoubtedly an excellent technology in the genomics, yet, primer dimers have a noticeable presence in any PCR reaction.

The PCR amplifies the target DNA with the help of the DNA primers and other ingredients. The pair of the primer, one forward and one reverse binds to one sense and one antisense complementary region of the DNA.

However, in some cases, the primers bind to itself or with each other and create one most common problem of the PCR, the “primer dimer”.

“The primers are short single-stranded artificial oligonucleotides, which is used to amplify the DNA of our interest.”

Designing a primer is one of the important parts of any PCR reaction. We have covered an interesting article on primer designing, read it first: PCR primer design guidelines

The ideal primer must have the following characteristics,

In this article, we will understand the mechanism of how primer-dimer forms, the reasons for primer dimers and how to avoid it. The content of the article is, What is primer dimer?

When some of the complementary bases of the primer match with each other or with other primers, it will form a stable duplex structure and amplifies along with the DNA of our interest called as a primer dimer.

The primer dimer is one of the most common problems in conventional PCR as well as in the real-time PCR. Even, dimerization is a curse for the DNA sequencing too.

There are two types of primer dimer commonly occurred in PCR reaction:

The primer dimer is formed by the interaction of the same primers.

Here, the same type of primer binds with each other or a single primer binds to its own sequences by forming the hairpin loop.

How primer dimers are formed?

The Taq DNA polymerase is the caregiver or a guardian for the primer dimer formation.

Taq DNA polymerase synthesizes any DNA by adding nucleotides to the growing strand. It only required a free  3′ end and Mg2+ ions. Once it finds it, it starts amplification.

The 3′ end plays an important role in the synthesis of DNA.

The 3′ end of the single-stranded DNA has the hydroxyl group (OH), which is recognized by the DNA polymerase and once the polymerase finds it, it joins the free OH to the phosphate group of the other nucleotide.

At every 3′ OH end, the DNA polymerase adds the nucleotides by joining it with the 5′-P.

The same mechanism implements during the primer dimer formation. The dimer provides free 3′ end to the Taq DNA polymerase and Taq amplifies it proudly.

The steps for the primer-dimer formation are:

The entire mechanism is shown in the figure below,

The Taq DNA polymerase is one of the biggest reason for the formation of a dimer in the PCR reaction.

Firstly, the Taq DNA polymerase does not have the proofreading activity hence it can not rectify the problem whether it synthesizes the correct DNA or not.

Secondly, the Taq DNA polymerase activates or starts its activity even at the lower temperature, therefore, during the reaction preparation, it starts the amplification once the dimers are formed.

The dimers are formed before the actual PCR reaction started, thanks to Taq. However, this problem can be resolved by using the hot start Taq that we will discuss in the later part of this article.

The concentration of primers:

For the ideal PCR reaction, 10 pM to 15 pM concentration of primer is sufficient to perform the reaction, higher concentration results in the primer-dimer formation because the unused primers bind with each other and form the primer dimer.

The use of the PCR enhancer:

Yet another big problem is the use of the PCR enhancers such as MgCl2, DMSO, KCl, formamide etc.

The PCR enhancers enhance or induce the amplification rate and process which also cause the primer dimer amplification.

However, the PCR enhancers are very important ingredients for some of the toughest template DNA such as longer DNA and GC rich template DNA.

Some of the articles on PCR enhancer:

Ideally, 25 to 35 PCR cycles are sufficient for the normal PCR reaction, if the PCR cycles exceed it causes primer dimer.

The annealing temperature is one of the prominent reason for the occurrence of the primer dimers.

These are the common reason for the development of primer dimer.

Now the question arises in mind that is a primer dimer really the biggest problem in the PCR reaction? For answering the question we have to understand how it interferes in the amplification.

How primer dimers hinder in the PCR amplification?

None of the PCR reaction is 100% prevented from the primer dimers.

Because no PCR reaction is accurate.

We have to add PCR enhancers, excess dNPTs and other ingredients to induce amplification. And anything excess in the PCR reaction is the feed for the primer dimer.

A delay in the reaction preparation facilitates primer bindings with each other, the annealing temperature of the primer dimer is too low, in fact, it can be synthesised even at room temperature.

That is why the Taq, the extra ingredients, delay in the reaction preparation and the extra round of amplification results in beautiful dimers in the gel.

For the tough templates such as high GC rich DNA or long-range PCR in which the amplification is even the toughest task,  the presence of primer-dimer blocks the entire amplification.

The primer dimer prevention is not a big task, we have to follow several rules and other techniques to overcome the problem.

How to prevent primer-dimer formation?

1. The first rule for accurate amplification is to design primer in the primer design software.

The primer designing software accurately calculates the GC content, annealing temperature and the length of the primers.

Also, it gives an idea about the secondary structure formation capability of the primers.

Primer 3 is one of the most trusted software for primer designing.

The PCR enhancer increases the efficiency of the amplification but we have to use it carefully because it induces the primer-dimer formation.

3. Do some structural modifications in the primer.

The major concern about the primer is the GC content of it. The G and C are the strong matches, therefore, do not use G and C at the 3′ end the primers.

If it binds, it will definitely form a dimer.

Instead, use low matches such as A or T to the 3′ end of the primer (Don’t worry about it primer 3 take care about it).

Use a 3′ complementary oligonucleotide tail on the 5′ end. At the lower annealing temperature, due to the closer proximity, it will remain attached.

But once annealing temperature achieved, the hairpin opens up and primer binds to the complementary DNA sequence.

Or we can use the block cleavable primers or chimeric primer to improve the efficiency of the amplification.

4. One another way to prevent the primer-dimer formation is to prepare the PCR reaction on the ice.

On the ice, at the lower temperature, the Taq DNA polymerase remains inactive and prevent the amplification of dimers.

The brilliant way to reduce the primer-dimer formation is to use of the hot start DNA polymerase.

The hot start DNA polymerase is used for the GC rich template amplification and long-range PCR.

For that, enzyme-linked antibodies or wax beads are used. We had covered one brilliant article on the hot start PCR. Please read it here: Hot start PCR

We can also use heptamers, peptides and short oligos for the hot start PCR.

Using the hot start DNA polymerase in one of the best choices to avoid primer-dimer formation.

The dimers are approximately 50 to 70bp long fragments. Hence it migrates faster and appears below the 100bp mark in comparison with DNA marker.

In fact, the primer band is denser and thicker because it is a combination of so many primer dimer products of 20bp, 30bp, 50bp and 60 bp.

In the real-time PCR, the primer dimer can be detected using the melting curve analysis.

Two different peaks of melting temperature are observed if primer dimers are present in the reaction. see the figure below, 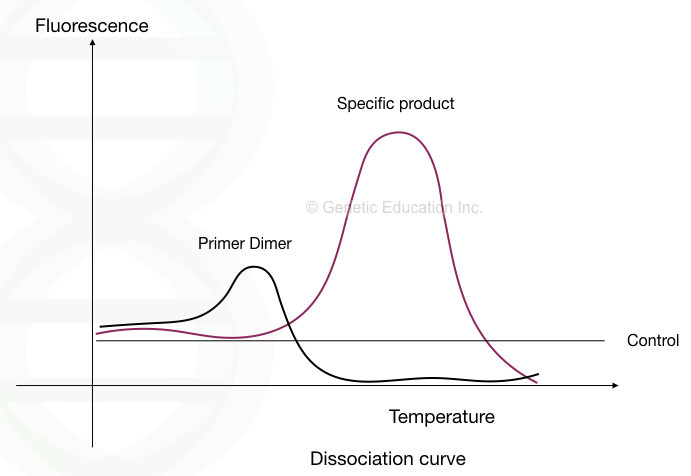 Tips: The use of the molecular beacons into real-time PCR is one of the best solutions to avoid primer dimer.

We had covered an article on Real-time PCR and molecular beacons please read it for more detail:

External resources related to this topic:

By following all these methods we can prevent the primer-dimer formation. Still, we can never stop it. It will observe less or more in the gel because of the use of PCR enhancing buffers.

Nonetheless, it is not a big issue for the standard PCR and the larger amplicons (more than 150bp) but it is a big problem for real-time PCR, DNA sequencing and shorter PCR products.