Cancer- one of the common phenomena in nature occurs due to the imbalance of cell division and cell death. But the actual reason behind that is the activation and inactivation of several types of gene sets due to mutations.

Nature wants changes that favor life, helps life to evolve more and survive on earth. Cancer-causing gene mutations are not one of them. Thus nature eliminates those. Anyway, come to the point.

The tumor suppressor genes control the entire cell division process and hence controls the entire process of cell proliferation and apoptosis. It is also known as ‘anti-oncogenes’ as well.

Related article: Cancer Genetic Testing- What Is It & How It is Done?

What is a tumor suppressor gene?

Simply put, we can say, a “set of genes which prevent tumor formation.”

For us to survive and to transmit our genetic material, cell division is required. Cells divide continuously and make tissues, tissues make organs and organs make systems. Our body is made up of organs and systems.

Therefore, a cell is a unit of life. However, it undergoes apoptosis and dies. The entire process of cell division and death is known as cell cycle and every body cell should have to follow it.

If it becomes unbalanced, cells divide uncontrolled which consequence into cancer. And we know how dangerous cancer is!

The tumor suppressor genes are a kind of switch or brake system for our bike. Using a brake system we can control the speed of our motorbike.

The tumor suppressor genes not only control cell division but also perform various other functions in our system. It promotes cell death, does do DNA repair, cell adhesion, and performs gene repression. let’s check out some of the functions of it.

Various types of DNA damage occur in our genome daily due to some intrinsic and extrinsic factors, however, our tumor suppressor genes have the power to repair it. Genes involved in various types of DNA repair pathways, for instance, the p53 is able to induce nucleotide excision repair and do DNA mismatch repair.

Some genes repair the replication errors while others can repair the double-stranded breaks into the DNA.

Tumor suppressor genes are great metastasis inhibitors. Metastasis is a process of migration of cancer cells or tumor cells to other body parts via blood or lymph system (in a broadway).

Thus the mechanism of metastasis helps cancer to spread and eventually cause death. Genes such as BRMS1, TIMP, FAK and CRSP can present metastasis or spread of tumors.

Apoptosis is a process of cell death or we can say it’s a programmed cell death mechanism. Every cell has to undergo cell death over a certain period. Genes like p53, APC, PTEN and CD95 promote cell death by inducing the apoptotic signals.

The main function of the tumor suppressor genes is to regulate the process of cell division. As we said above, uncontrolled cell division leads to tumors, thus regulating its activity is pivotal for controlling the cell cycle.

Simply put, this group of genes make proteins that monitor the entire process of cell cycle and tell a cell to undergo death, after all, it is necessary for us.

Mechanism of action (The two-hit hypothesis)

Unlike the oncogenes, the tumor suppressor genes are recessive in nature and are majorly responsible for hereditary cancer syndrome. Cancer itself isn’t inherited, though.

Recessive in nature means two genes copies are required to perform the action. For example, if one copy of some tumor suppressor gene is mutated, it can’t cause cancer, until the second copy becomes mutated by any means.

Let’s understand it by taking an example of breast cancer- a type of hereditary cancer syndrome.

A single mutant copy of a gene BRCA1 or BRCA2 can’t cause breast cancer, however, if it is inherited into the child, it is more likely to occur. So for any reason, if the second copy mutates, it results in cancer.

That is why it is known as a two-hit hypothesis. One hit at birth (one mutant allele) and second hit after any time throughout life.

Notably, this class of genes doesn’t affect directly, instead, it forms a protein that takes parts in the cell cycle. Therefore mutation in a tumor suppressor gene makes fault protein or false protein which can’t function normally at all.

What does it mean?

Nothing is there in a cell cycle to stop cell division.

Not all the tumor suppressor genes are recessive, for instance, the world’s first identified TSG Rb (retinoblastoma) is dominant in nature, only a single copy of it is enough to cause retinoblastoma. This is the reason, it is most commonly observed at a younger age. 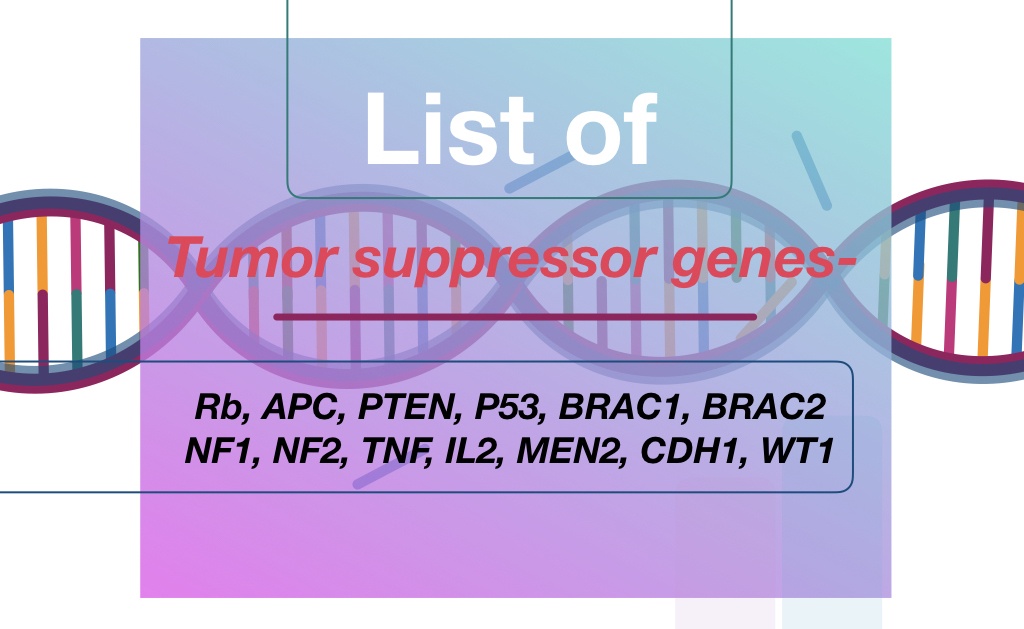 The P53 gene is located on the short p arm of chromosome 17 at 17p13.1 which constructs a protein known as tumor protein p53. This protein controls cell proliferation and uncontrolled growth.

The mutations in the P53 gene are involved in bladder cancer, breast cancer, lung cancer, melanoma, ovarian cancer, and li-Fraumeni syndrome. In around 50% of cancer and the present gene mutations are involved.

The protein of the P53 gene also performs a function of signaling to either repair DNA damage or to make the cell undergo apoptosis.

If the p53 gene mutations occur in germline cells, it can be inherited in consecutive generations, for example, some breast cancer (governed by the P53 gene) or Li-Fraumeni syndrome. The signs and symptoms of cancer appear at birth.

However, not all but some gene mutations are somatic in nature. Which means it is non-inherited and only tissue specific. Cancer occurs in the tissues in which the P53 gene is mutated. Majorly, the gene mutations in the P53 gene happens by extrinsic factors like smoking, chemicals like aristolochic acid, UV light or other toxins.

Besides the common type of cancer we have listed above, the present gene mutations are also observed in liver cancer, osteosarcoma, adrenocortical carcinoma, head/neck squamous cancer and cholangiocarcinoma.

Due to its involvement in a broad range of cancer, scientists look at it first and order DNA sequencing or PCR amplification test first to know the cancer cause.

Key information: the P53 or TP53 gene is a kind of transcriptional factor.

DNA sequencing PCR are the two common methods used to find out mutations in the P53 gene, the PCR can only find known mutations, nonetheless.

In DNA sequencing, the entire P53 gene is read by the machine to detect sequence variation and then compared with the normal sequence to find out mutations.

Whereas in the PCR, any known alterations or the quantity of the mutant gene are determined through amplification. We will discuss the P53 gene in detail anywhere else.

Janus Kinase 2 is a second-most candidate tumor suppressor. A gene encodes a protein that promotes cell division like the P53 gene. Some of the other common names of the present gene are JAK2_HUMAN, JTK10, tyrosine-protein kinase JAK2 and Janus kinase 2.

The gene is located on chromosome 9 at 9p24.1. The protein also took part in the JAK/STAT cell signaling pathway.

As we said it is the second most common gene with 2.06% of prevalence.

Some of the common mutations of JAK2 are JAK2 exon 12 mutation and JAK2 V617F. Polymerase chain reaction and DNA sequencing are the two common methods used to detect it.

Phosphatase and tensin homolog gene is located on chromosome 10 at 10q23.31 which encodes an enzyme that controls cell division.

The PTEN gene mutations are involved in Bladder cancer, cholangiocarcinoma, lung cancer, breast cancer, prostate cancer and many others.

“In 70% of prostate cancers in males occur due to PTEN gene mutation.”

The Interleukin 2 is also a class of tumor suppressor gene that helps to regulate cell division. The gene is located on chromosome 4 at 4q27.

Majorly the gene mutations of this gene are involved in retinoblastoma. Besides, several other gene mutations are also reported in lung cancer, cholangiocarcinoma and bladder cancer.

The APC gene encodes a protein known as the WNT signaling pathway regulator that is a kind of tumor suppressor gene. The gene is located on chromosome 5 at 5q22.2.

Some other tumor suppressor genes and their related information are given into the table below,

Scientists are now trying to develop some novel gene therapy for treating the mutated TSG, however, the success is very far. Still, some potential results are obtained in several gene therapies.