“A genotype is a genetic makeup or genetic content of an organism to make a specific trait is known as genotype.”

Genetic is a field to study genes, DNA, chromosomes and related disorders. Terms like gene, allele, genotype, phenotype, chromatin or chromatid are so confusing, Right!

Genotype and phenotype are two different and opposite terms but are related. The genotype for one trait decides what phenotype it produces, however, if we discuss it more in-depth then not only the genotype but also some other intrinsic and extrinsic factors are involved in deciding the phenotypes.

Simply put, before starting the article I can say, the genotype is a genetic property while the phenotype is a visible characteristic. Read more differences between genotype vs phenotype here.

In the present article, I will explain to you what a genotype is, in plain language. With this, I will also explain to you how you can calculate the genotypic frequency and what are the methods of genotyping.

What is a genotype?

The term was originally coined by the botanist and geneticist Wilhelm Johannsen in 1903. By doing experiments on plants (called pure line experiments) he coined three different terms: gene, genotype, and phenotype.

Frankly speaking, the term genotype is more unclear and confusing than phenotype. A height, color, and skin tone are examples of phenotype.

However, defining a genotype is a bit completed. The reason is, not all the genetic constituents of us can form a protein. Approx. 97% of our DNA is non-coding. So to say that ‘genetic content which produces a phenotype’ isn’t entirely true.

Let’s check out this new definition,

“The genetic makeup/genetic constitution/genetic combination of an organism for a particular trait that determines or produces a phenotype is known as a genotype.”

It clearly states that not all genetic content, only those portions or part of a genome that for a trait or traits, is our genotype. And that part of the genome is genes.

“Genes are the functional unit to form a protein.”

Notably, the genotype is one of the three factors that decide the phenotype therefore, a genotype alone can’t manufacture a phenotype.

The phenotype is a characteristic of an organism produced by the interaction of genotype, environment, and epigenetic factors. 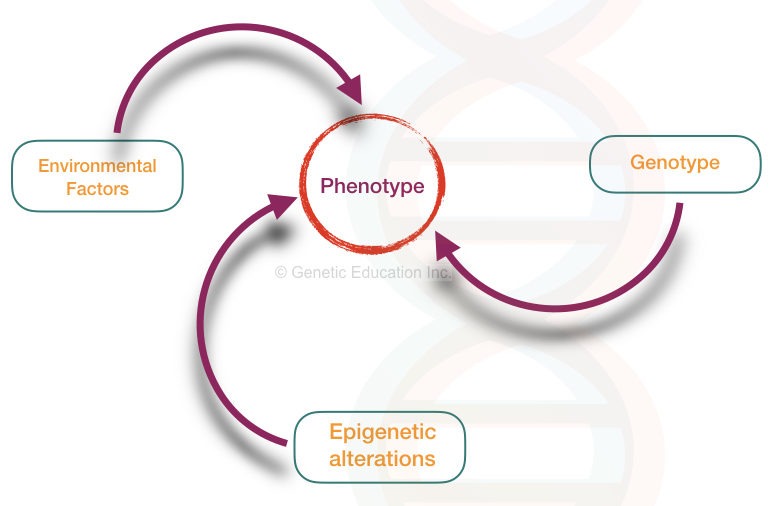 Genotype, environment and epigenetic alterations are the three factors responsible to make some visible forms.

Now focus on this part of the article because it is very important to understand before going ahead. We discussed genotype, it’s a protein-coding part or genes, right!

But the non-coding part of our genome also performs one important function that is to regulate the gene expression. In which amount a particular protein form is governed by epigenetic factors.

Change in the phenotype of an organism without changing its gene sequence is known are epigenetic factors or alterations. Histone modification, histone methylation, acetylation, RNA processing and methylation of the DNA sequence are some of the common types of epigenetic alterations.

If you want to read more on this topic, please read this article: What is epigenetics?

The third factor is the environment.

Genes interact indirectly with the environment and take action. For example, in regions of higher temperatures, more melanin is needed to protect our skin. Thus melanin coding genes are expressed in higher amounts and result in dark skin tone.

Note here: melanin coding gene is a genotype, a higher temperature is the environmental factor, high expression is governed by epigenetic factors and the dark skin tone is a resultant phenotype.

Some of the environmental factors are UV light, radiation, chemical exposure, food habits, and lifestyle.

As per the Mendelian law of inheritance, three black eyes and one brown eye colored progenies will be produced. See the figure, 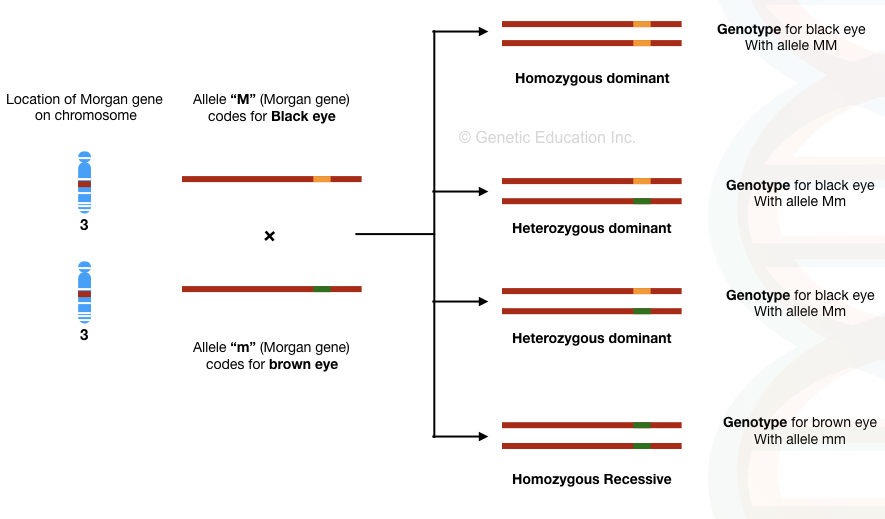 Therefore, two different alleles are responsible for the production of three different genotypes. So we can re-defined genotype as “a combination of two (same or different) alleles is also known as genotype.”

A genotype made up of two different alleles (one dominant and one recessive) for a phenotype is known as a heterozygous genotype.

Again as I said, epigenetic factors and environmental conditions of populations also have a great impact of deciding phenotype. Now let us understand mathematically what a genotype is and how to calculate genotype frequency.

What is genotype frequency?

We can determine any variations of the entire population by studying their genetic and allelic frequencies. Simply put, we can say, ‘the genotype frequency is the number of individuals in a population having one particular genotype.’

The definition is as stated, “ the genotype frequency is determined by dividing the number of individuals with a genotype by the total strength of the population.”

We can calculate it by finding the genotyping frequencies of the population. Suppose if the population is in HW equilibrium than the Hardy-Weinberg’s law is,

Suppose in the population of the 100 individuals, the 74 individuals have a black eye and 26 have a brown eye.

The frequency of allele M is,

The frequency of allele m is, 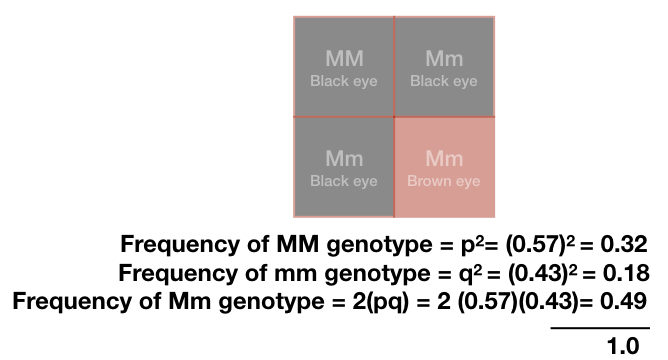 “Genotyping is a method or technique used to determine genotype.”

Different alleles originate from my mutations, those are SNPs (Single nucleotide polymorphism), CNV (copy number variation) or some other structural alterations.

Millions of SNPs are identified in the human genome. Based on that data different types of method used for the detection of SNPs are: 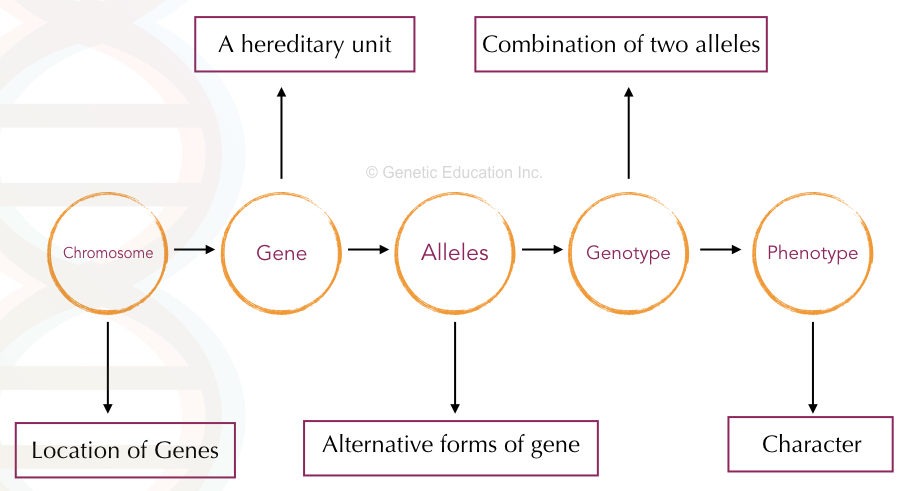 The above genotyping methods are used to know a single base various, deletion, duplication or translocation, however, to detect major structural variation methods like karyotyping or whole chromosome microarray is used.

Here one thing is very important to understand that these methods can only identify the known genotype or various. None of the methods can identify new alleles or mutations. To do this, a state of the art, robust and futuristic technique known as DNA sequencing is employed.

The DNA sequencer machine reads every base of a DNA sequence and captures alteration in it if any. Read more on DNA sequencing.

Contrary, in the DNA microarray, millions of different known variations can be encountered. Here, short, single-stranded oligonucleotides are immobilised on the solid surface which hybridised with the sample DNA as well as control DNA.

Read our in-depth article on present topics: Genome on a chip: DNA microarray.

A machine compares both DNA hybridization (control as well as a sample) and finds variation in the genotype.

The genotyping methods are used to, 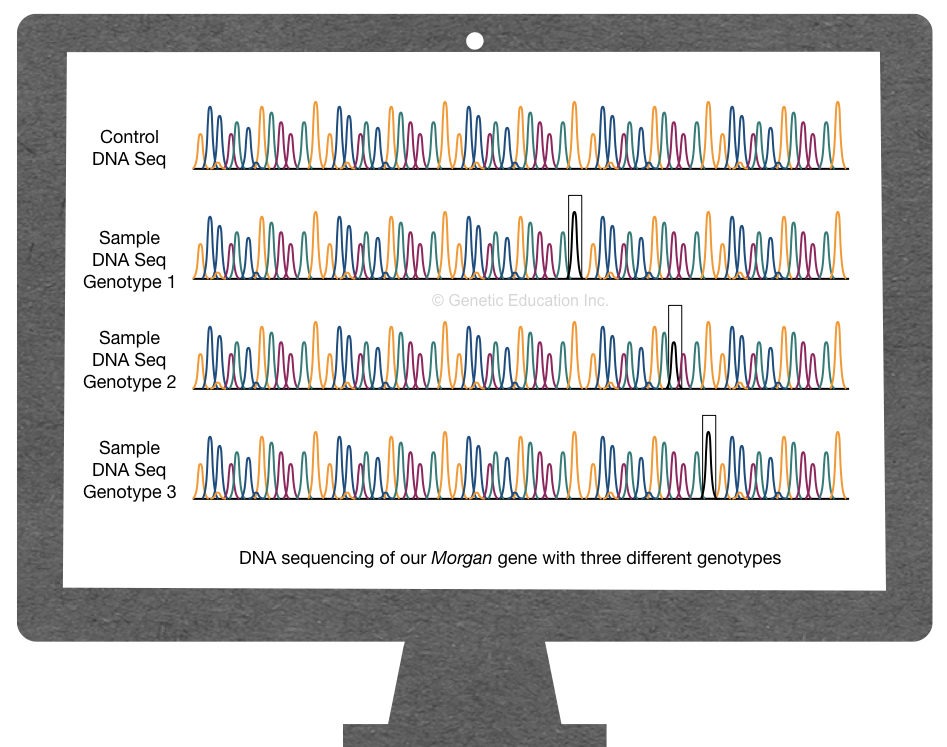 The most commonly used genotyping method is PCR based gel electrophoresis method.

Read more on, We have given like for both the techniques here, go and read it:

The PCR method is advanced, accurate, rapid and cost-effective. The method is used for the identification of the different strains of the microbes as well. Detection of different types of the HPV strains is possible by HPV- PCR based genotyping method.

A variation known as ARMS- PCR is applicable to detect SNPs. Nowadays, SNP genotyping of SNP microarray is very popularly used in order to detect millions of single nucleotide changes in the genome.

Nonetheless, as we said, the involvement of environmental factors can’t be ruled out.