You are on this article, which means you are in search of more information on heterochromatin, and probably you know the structure of the genome and DNA organization- how DNA is arranged on chromosomes.

Here is the walkthrough of the present topic in brief.

Chromatins are later on arranged on chromosomes by interacting with a special type of protein- histones.

What is the characteristic of transcriptionally inactive heterochromatin?

—–Methylation of histone 3 at lysine 9.

Chromatins are fragile, loose, irregularly arranged double helices DNA present in a cell nucleus, you can imagine a bowl full of noodles- bowl as a cell and noodles as chromatins.

Interestingly, we can’t arrange noodles in a bowl in specialized structures but a cell can! Cells allow DNA helices interaction with protein and manufacture euchromatin and heterochromatin regions- different in structure, function and arrangement.

At a molecular level, DNA interacts with histones like H1, H2A, H2B, H3 and H4 and forms a nucleosome. This, later on, manufactures bead-on-string appearing chromatin.

When the 30nm fiber of DNA is constructed from this complex, two distinct chromatids form chromosomes through centromeric attachment.

Euchromatin and heterochromatin regions are scattered on chromosomes having more heterochromatin on telomere and centromere regions. It can be further classified into two categories that we will discuss in the upcoming section.

Let me explain to you what heterochromatin is and its types in the present article. I will explain the function of both and their importance as well. In addition, we will also discuss the molecular structure of HC and other aspects as well.

In 1928, Emil Heitz defined the concept of heterochromatin, abbreviated as HC.

Around 90% of the human genome comprises this region in which 6.5% are constitutive while the rest are facultative.

“A darkly stained, tightly wrapped, inactive region mainly located in the telomere and centromere region of the chromosome is known as heterochromatin region.”

Previously scientists believe that the whole region is transcriptionally inactive, although it is not true. The entire heterochromatin region can be divided into two broad categories based on transcriptional activity.

One, which is inactive but can be activated or active in other cells, and another type is an entirely inactive junkyard of the genome. These two types are facultative and constitutive heterochromatin, respectively.

The facultative heterochromatin region is dynamic in nature, which means, if it is active in one cell type or organism, can be inactive in another. These regions though have the capacity to activate transcription, are considered as poorly expressed genes.

What does it mean!

It shows that in some cell type or organism it’s facultative while in others it is constitutive. The classic example of facultative heterochromatin is the inactivation of the X chromosome.

Let me explain to you in brief,

There are two X chromosomes in females, so one must be inactivated to regulate gene expression. Noteworthy, the process of X chromosome inactivation is random, sometimes maternal while the rest of the time the paternal X chromosome gets inactivated.

The X-chromosome is rich in facultative heterochromatin, having the potential to switch on or off gene expression. The presence or absence of the repetitive DNA decides the nature of chromatin.

The facultative HC can be formed by nuclear RNAs as well. For example, the XIST gene plays an important role in the mechanism of X- chromosome inactivation. The XIST gene forms a transcript- XIST mRNA, that helps to inactivate the X chromosome in somatic cells of female mammals.

Another example of flexible HC is the inactive sex-vesicles at the pachytene stage of male meiosis.

The facultative HC is reversible, can be converted into euchromatin, are repetitive/ satellite DNA poor region and is enriched with transposons, especially LINES.

In addition, the present region is less polymorphic in nature. But cytogenetically It can’t be stained by the C banding.

These regions are constant and entirely inactive in all cells and all organisms of a species. These regions are structurally made up of short repetitive DNAs, are satellite DNA and settled on telomere and centromere regions.

Genes located in it are very poorly active transcriptionally means, can’t form a protein at all.

Functionally, the constitutive heterochromatin, though are non-transcriptional, provides structural stability and flexibility.

The repetitive centromeric regions seal two sister chromatids during the metaphase using a sealing protein and also binds to kinetochores too.

It helps in the proper segregation of chromosomes during cell division.

Contrary, the repetitive regions- the non-coding ones, present on the arms as telomeres protect the vital region of chromosomes which is the “gene-rich” arms.

Folding of varied satellite DNA helps in gaining the compact structure of the constitutive DNA region, moreover, it remains inactive and unchanged during all cell division phases. Enriched repetitive DNA’s make it more prone to polymorphism.

The presence of constitutive heterochromatin functions as a cohesive or glue to join two sister chromatids. Protein HP1 and Swi6 are essential needs to do the same. 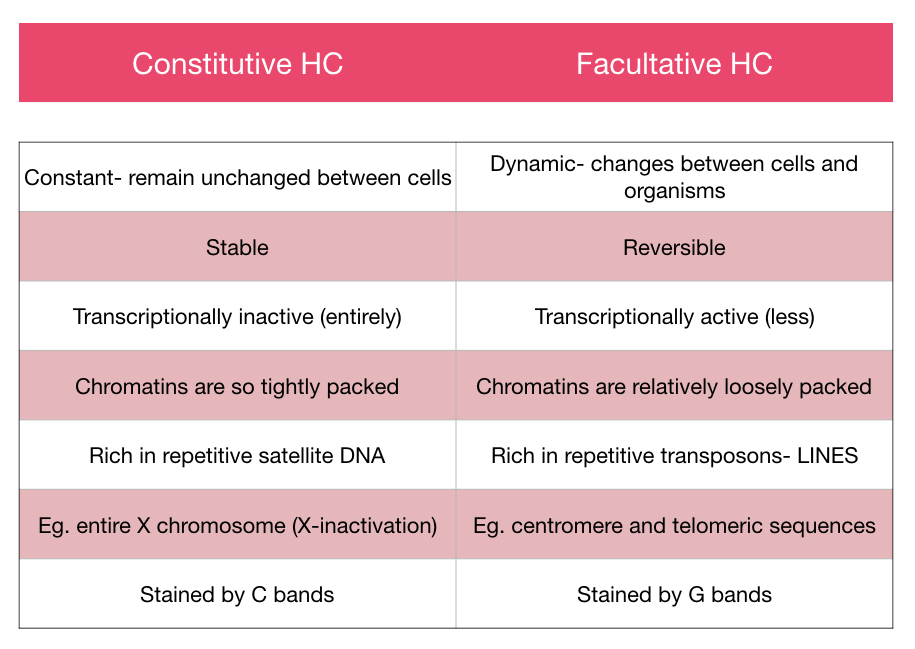 Note: heterochromatin is one among many epigenetic gene silencing factors.

Structurally, as we mentioned, the HC is made up of the satellite DNA and repetitive sequences majorly are tandem repeats and transposons. So either type of non-coding sequences is crucial for the structural consistency of HC.

Collectively the major portion of the HC region is made up of tandemly repetitive sequences such as STR or VNTR means, short tandem repeats and long tandem repeats.

Note that each one is used as a marker sequence and are non-coding DNAs. The STRs are 1 to 6 bp long microsatellites present 5 to 200 times in a genome.

The size and number of repeats vary among individuals of the same species.

It’s a kind of retrotransposon if transcribed, can form a reverse transcriptase enzyme. Though present in eukaryotes, they are inactive for thousands of years. Note that LINES are also repetitive.

A major heterochromatin portion in mammalian cells is the LADs comprising 30% portion, are gene-poor regions, indicating that LADs are gene less, a low gene expressed and fewer gene density regions.

Contrary, The NADs which are present around the nucleolus, are rich in satellite repetitive DNA sequences, inactive rDNAs and other repressed genes.

Note that the NADs and LADs can be converted in order to regulate gene expression.

As we explained, genes for some kind of rRNA are present in the HC, their expression is regulated by nucleophosmin 1 and nucleophosmin 2. Mutation in either of the proteins causes dysregulation of the rRNA gene expression and produces abnormal nucleolar morphology.

Heterochromatin is inactive itself, but nearby genes can also be inactivated or repressed, through the effect known as PEV- position effect variegation.

There are some special characteristics only the inactive heterochromatin region has. Here they are:

When sequences are repetitive, indicating that present frequently at regular intervals.

The entire heterochromatin region is rich in methylation, means, blocks access to enzymes, the constitutive HC is more methylated while the facultative one is less methylated and discrete.

One of the most important properties of the HC region is that it doesn’t allow access to any enzymes such as DNAse or restriction enzymes. That’s the reason it remains constant and unchanged.

The entire 90% portion of HC is late replication. There are two reasons for that, first, transcriptionally active genes must be replicated on priority to avoid replication error and second,

It doesn’t allow access to enzymes easily, and so for the polymerase too and therefore replicate at slow speed and rate.

Studies on model organisms suggest that the heterochromatin, especially the constitutive one, can aggregate at the centromere region, interact with other ribonuclear proteins and forms the centromere at interphase.

Note: the term heterochromatin was given due to its property of differential staining.

Transcriptionally inactive heterochromatin performs critical functions for our genome, even though considered as a junk one! Here are some:

Helps in transcription and translation

Note: Proteins that are involved in DNA packaging are categorized into nucleoprotein complexes.

How to study heterochromatin regions?

Before going inside the present topic, first, understand why to study heterochromatin. Sequences present in these regions perform varied functions to regulate gene expression.

And therefore in order to investigate gene expression or expression profile we should have to study it.

Many state-of-the-art and accurate techniques are available to study, however, karyotyping- a kind of cytogenetic technique is the first and widely used for doing so.

The whole principle of karyotyping depends on the differential banding pattern obtained by differential staining of euchromatin and heterochromatin. Ultimately, varied patterns of bands observed on chromosomes, make them distinguishable from each other.

Centromeric regions of these chromosomes appear darker and thicker by C bands.

Noteworthy, no cumulative or quantitative information can be generated using the present technique. More extensive techniques based on the principle of “ChIP” are applicable to investigate HC.

The objective of either technique is to investigate those chromatins associated with the proteins and are inactive.

This means it studies chromatin or DNAs only are tightly wrapped with histones or other nuclear proteins. Resultantly, information of DNAs which are transcriptionally inactive, collected.

In the facultative region, a mutation in the XIST gene causes an imbalance of the X chromosome inactivation, which means an expression of genes located on the X chromosome can be duplicated.

There are serious consequences of it in females. It leads to infertility and other mental or cognitive problems.

Another condition known as  Roberts syndromes or ICF syndrome occurs by alteration in the constitutive region. It causes Immunodeficiency, Centromeric instability and Facial anomalies. It is a kind of recessive genetic condition.

The whole inactive X chromosome is an example of heterochromatin.

Heterochromatin regions in a genome perform three critical and important functions such as to regulate gene expression, genome organization on a large scale and formation & structurization of the nucleolar region.

Heterochromatin is present in three regions commonly, are telomere, centromere and pericentric regions.