A molecular beacon is the hairpin-shaped single-stranded structured probe which is highly sequence-specific and sensitive.

are used in the real-time PCR assay for the quantification of RNA or DNA present into the sample. It is used in place of the linear TaqMan probe.

In the conventional PCR, we can only amplify the DNA however, in the qPCR or rt PCR we can even quantify it by using the fluorochrome chemistry.

The real-time PCR method is based on the two types of chemistry,

We have covered an in-depth article on the when to use dye-based method and when to use Probe-based method. Read the article here: Real-time PCR: Principle, Procedure, Advantages, Limitations and Applications

In the present article, we will discuss the basic principle behind the use of molecular beacons and why it is applied instead of the linear probe. Subscribe to nature using this Coupon Code: nat50q219 and get 50% off on your subscription. Limited period offer.

A brief introduction to real-time PCR:

Even the expression of a gene in a particular tissue can also be measured using the qPCR method.

The method is based on the use of fluorochromes. Once the fluoro-labelled oligo binds to its complementary sequence on the target DNA, it emits fluorescence. The level of fluorescence emitted is measured by the real-time PCR instrument.

In the dye-based method, the dye binds to the double-stranded DNA emits fluorescent which is measured for the quantification.

In the probe-based method, the fluoro-labelled probe directly binds to the complementary sequence on the target DNA.

The fluorescence released by the probe is directly proportional to the amplified target.

This is a brief and general idea behind the real-time PCR. Read our article on more detail of real-time PCR: Real-time PCR: Principle, Procedure, Advantages, Limitations and Applications

Three types of probes are used in the probe-based hybridization method:

Here we are going to discuss only about the molecular beacons.

What is the molecular beacon?

The molecular beacons are the TaqMan probe used in the real-time PCR, mainly for increasing the specificity of the reaction.

It is a single-stranded oligonucleotide hairpin structure made up of 25 to 30 nucleotides. In which the 15 to 20 nucleotide present into the middle-loop is complementary to the sequence of our interest.

Whereas the sequences present on both arm are complementary to each other.

Hence it remains bounded with each other.

The molecular beacons consist of 4 parts.

The step consists of 7 to 9 nucleotides which are complementary to each other. The nucleotides in the step remain bounded with each other if the beacon is in the relaxed state.

The loop is the central part of the molecular beacons which is very much important as it is complementary to the target sequence.

The central loop part contains 15 to 20 nucleotides, complementary to the sequence of our interest.

The 3′ end of the molecular beacons contains the quencher dye. This quencher dye on the 3′ end is in the close proximity with the 5′ end, prevent the emission of fluorescence. 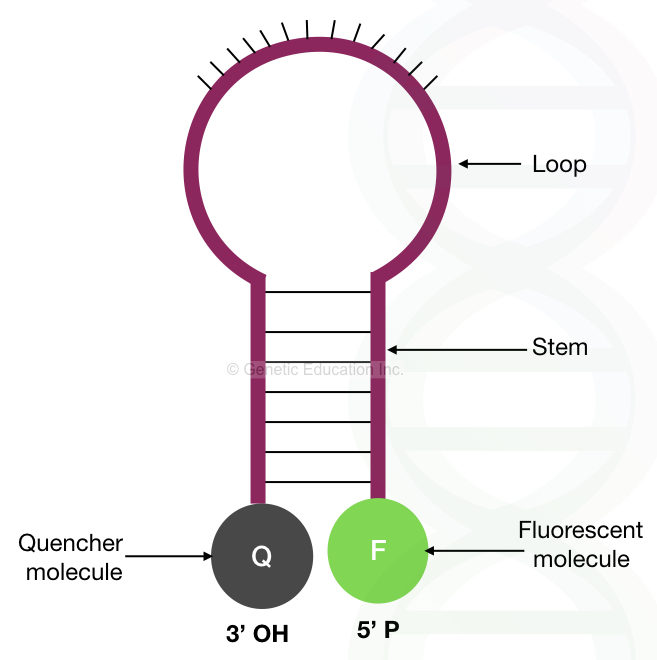 The structure of the molecular beacon

The linear TaqMan probe can work efficiently than question arise in mind why to use the molecular beacons?

What is the importance of molecular beacons?

Non-specific binding is one of the major problems in any PCR reaction even in the real-time PCR too.

The real-time PCR quantification assay is too sensitive, it detects some of the sensitive templates and quantifies it. It is applicable mainly in the diagnostic field so imagine how critical it is to avoid any mistakes during the PCR.

What is the problem with the linear TaqMan probe?

The problem with it is if it finds some of the complementary bases, it hybridized, the fluorochrome unquenched and release the fluorescence.

So using a linear probe in the real-time endpoint or real-time PCR assay is not a good choice always.

The molecular beacons are specially designed probes on which if it is not bound to any sequences, the majority of its energy is saved (remains in the hairpin state- relaxed state).

The fluorochrome no longer quenched. It is released and emits the fluorescence.

The detailed stepwise explanation of the mechanism of molecular beacons action is shown in the figure below. 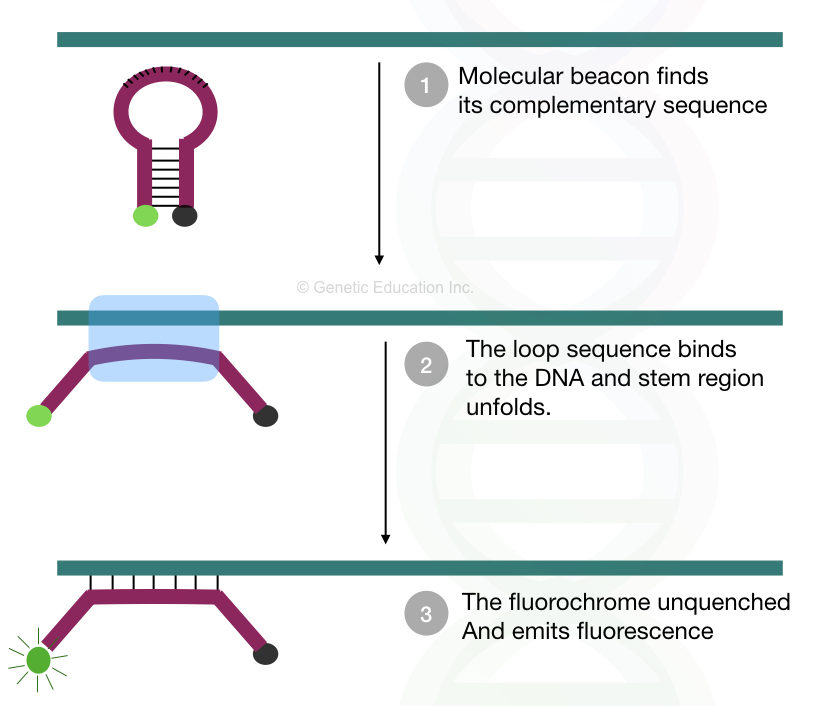 As each probe binds to its complementary sequence, the amount of the fluorescence emitted is measured in a real-time.

Depending upon that, the template DNA is measured.

After each PCR cycle, more probes are hybridized more fluorescence is emitted and more templates are quantified.

The entire mechanism of the molecular beacons is based on the stability of the hybrid formed during the amplification (DNA: DNA hybrid or RNR: RNR hybrid).

Therefore, the hairpin is open up only in the presence of the more stable hybrid viz, exact base pairing. 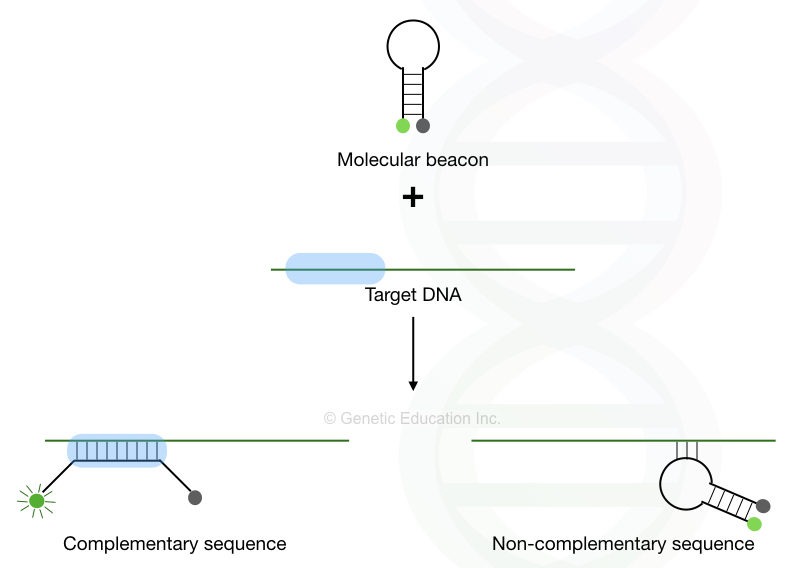 Designing the molecular beacons are quite a tedious job but it will give a good output.

There are several points you have to understand if you want to design your own beacon.

Broadly, the primer has the following characteristics:

The annealing temperature of primers and beacons must be same or nearer.

Target designing is as important as the primer designing.

The amplified product of the target DNA must be between 100 to 300 base pairs. A fragment larger than this will create unnecessary problem in the PCR amplification.

The target region must be less GC rich and can be secondary structure free therefore the molecular beacon can bind efficiently.

Design beacon in two different parts, first design the loop part and then the stem part.

In simple words, we can say that at the same annealing temperature the primer and probe bind to the complementary region.

The maximum nucleotides in a loop are 30, do not use more than this.

The stem contains 5 to 7 complementary bases.

If the stem base pairing is more stable than the loop nucleotides cannot bind to its complementary sequence.

Nonetheless, the stem base pairing must be stable enough that it can not unfold in the presence of mismatch base pairing of the loop. 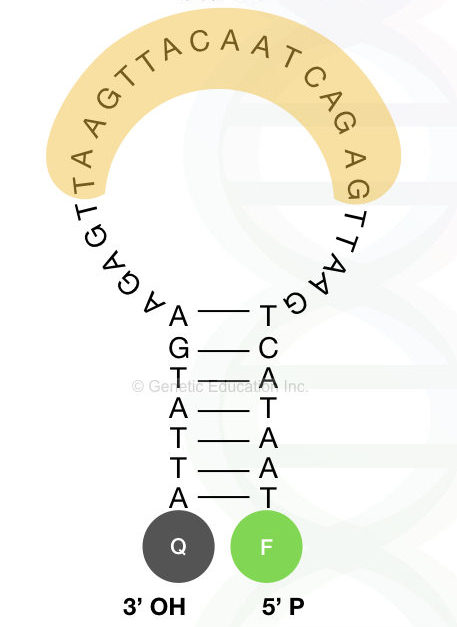 The molecular structure of the beacon.

Adding the fluorochrome and quencher dye:

A single fluorochrome added at the 5′ OH end of the beacon while the quencher molecule is added to the 3′ end in close proximity of the fluorochrome.

It increases the specificity and the sensitivity of the reaction.

It increases the thermal stability and efficiency of hybridization.

Probes can be preserved during the reaction.

The diagnostic value of the beacon chemistry is more as compared to the dye method.

It is used in the determination or separation of different alleles.

In microbial genetics, it is used in the detection of the pathogen. Furthermore, the accurate quantification of an infectious pathogen can be done.

Interestingly, it is used as an intercellular probe for the detection of DNA or mRNA.

External resources related to this article:

10 secrets to Prepare a PCR reaction

Transposons: A Jumping Entity and a Foe with Benefits