The arrangement of DNA on chromosome through nucleosome assembly is known as DNA packaging.

Wrapping of DNA molecule around the histone protein is known as nucleosome.

In the previous article “ story of chromosome” we had covered the history and structure of the chromosome in brief. The chromosomes are the basic unit of hereditary. DNA is arranged on the chromosome and made up of nitrogenous bases, phosphate and sugar.

For more detail on the structure of DNA read the article: DNA story: The structure and function of DNA

A haploid genome is made up of 3.7 billion base pairs per cells. If we consider the DNA of all body cells and make a single long chain we can reach to the sun and believe me it is longer than that distance.

The DNA folded 104 times to its original length and become a metaphase chromosome. On the various stage of arrangement DNA arranged in different structure by interacting with several proteins.

The folding of DNA is started when the proteins called Histones interact with DNA. The eukaryotic DNA packaging is organized into 3 major structures;

Each nucleosome is made up of eight Histone molecules (each H2A, H2B, H3, H4 two times in a single nucleosome). The DNA wraps around it to form the next level of organisation. See the image, 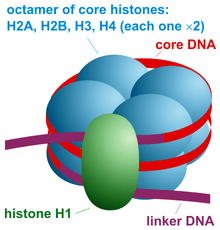 Histone proteins are positively charged protein molecules which interact with negatively charged phosphate of DNA and makes a tight wrap. The H1 histone is not involved in the nucleosome assembly. Hence the remaining four histones are called as core element or nucleosome core particles.

DNA molecules wrap around the Octamer of 4 histones and create the nucleosome core.

Noticeably, H1 is not a part of histone core assembly, it binds to histone DNA and hence called as linker histone. Only single H1 histone is present on each linker DNA therefore the H1 histone is half in number as compared to other histones.

H1 histone is slightly larger than other histones. The histones in the nucleosome core assembly have a histone fold domain which facilitates the binding of DNA to histones.

Each histone molecule from the core histone assembly has the amino terminus tail of amino acids. The nucleosome core along with the linker DNA is called as chromatosome.

For performing replication, it is very crucial to release histones from DNA thus, the DNA in nucleosome core assembly is negatively supercoiled. It wrapped left-handedly which allows DNA to perform replication.

We had discussed earlier that only the linker DNA can be digested with the nuclease and the DNA in histone core assembly remains protected by nuclease activity. This function is served by the H1 histone protein.

The H1 Histone binds to the DNA in two distinct regions. The one end of the H1 histone binds near the linker DNA and another end of H1 binds in the middle of the 147bp DNA of nucleosome assembly, asymmetrically.

The long sequences of nucleosome assembly and linker DNA is called chromatin. The chromatin is,

The addition of the Histone H1 gives the next level of compaction to the DNA by creating the 30nm fibre.

The 30nm fiber organized further into one of the two described models: solenoid model and the zigzag model.

In the zigzag model of 30nm fiber, the linker DNA is passed through the central axis of the fiber and creates a zigzag pattern of arrangement.

The 30nm fiber cannot be formed without the Histone tail. The amino-terminal histone tail is capable of binding with adjacent histones into a 30nm fiber. This will stabilize the 30nm fiber in a compact form.

Finally, the loop creates chromatid (not chromatin). The chromatid is now attached with one centromere and becomes a chromosome. Each chromosome has two sister chromatids.

Histone proteins play an important role in the maintenance of gene expression. Histone remodelling and modification regulate the replication and transcription.

During the replication, polymerase only accesses the DNA which is not bound by histones. Histone acetylation, methylation, phosphorylation and other modification allows DNA replication and transcription.

Role of MgCl2 in PCR reaction