“The excision of a transposon from a native location followed by its integration at another location in a host genome is referred to as a non-replicative mechanism of transposition.”

The non-replicative mechanism of transposition, a kind of ‘cut and paste mechanism’, is also known as the conservative model of the transposition that helps transposons to jump from one location to another without leaving a copy behind.

Henceforth, it is also known as the cut and paste mechanism of transposition. But you may wonder, Why is it known as conservative transposition? During the transportation, on the non-homologous locus, the sequence of transposon remains conserved.

We covered almost all the information about the transposons, in the present series of articles. Some of the previous articles are:

Let me brief you on the topic.

The transposons are the mobile genetic elements present in prokaryotes as well as eukaryotes that can move from one location to another location. Structurally, it contains a gene body that can make a couple of genes, terminal repeats either inverted or direct and a piece of the previous host DNA.

See the structure below,

“It is believed that transposons can move between different organisms too.”

Notedly, the transposase protein (or group of proteins) recognizes those sequences first to initiate the activity. The structure of the synaptic complex is given below,

Once it binds to the terminal repeats, it brings the two ends together and creates a stable DNA-protein complex known as a synaptic complex.

The synaptic complex truly decides the fate of the transposon, it ensures DNA cleaving and joining which a transposon needs to move. The next step is excision.

In this step, the DNA-protein complex, a ‘transpososome’ consecutively cuts the transposon. First, it cleaves one DNA strand on each side exactly at the junction between the TE and the flanking (previous) host DNA.

(Remember! the transposon contains some of the DNA sequences at their ends from their previous host DNA).

Here, it aims to generate a free 3’ OH end needed to fill the gap. In the second part of this reaction, the synaptic complex cleaves another strand at both ends. Note that the same transposon isn’t required to catalyze both reactions.

Once the transposon is completely excised from the original position, it’s now ready to move. In the very next step, The transposase creates two single-stranded cuts on the host DNA. Immediately after that, the free 3’ OH end of the transposon DNA attacks the 5’ and the host DNA.

At a molecular level, the reaction occurred as mentioned below,

Transposons fill the gap between the junction of the 3’ end (of transposon) and the 5’ end (of the target DNA). An important event that occurs at this point is the gap-filling.

Once the gaps are filled, the transposases are separated from both ends, but another end of the target DNA remains unfilled. The entire process of non-replicative transposition is shown in the figure below,

The transposase cannot fill the gap between the 5’ and 3’ ends of the transposon and target DNA, respectively. The 5 to 9 nucleotide gap remains unfilled on both ends.

A cell’s DNA repair mechanism does do this. The 3’ end of the target DNA is free, this site is utilized as a primer by the DNA repair polymerase.

The polymerase fills the gaps by adding nucleotides between the gaps. The same gap is filled by the polymerase on the other side which generates two duplicate sites on both the flanking regions of a transposon.

The entire process is governed by the cellular repair protein and is known as target site duplication. We have covered a whole article on it, you can read it by clicking the link.

Target site duplication is another important characteristic of a transposon.

“The target site duplication length divulges a distance between the transposase-action site on the host DNA.”

In the final step, the DNA ligase seals the gaps between the newly synthesized DNA. Apart from their role in the transposition, the transposase also performs one important function needed to complete the reaction.

It protects the transposon DNA ends attacked by cellular enzymes during the process of strand transfer.

Now, what about the gap that remains behind!

After completion of the entire process of conservative transposition, a gap, more precisely we can say a double-stranded break remains as such, at the native or old place.

Later on, that gap is filled by the repair mechanism of a cell. It might be joined directly or filled by homologous recombination. 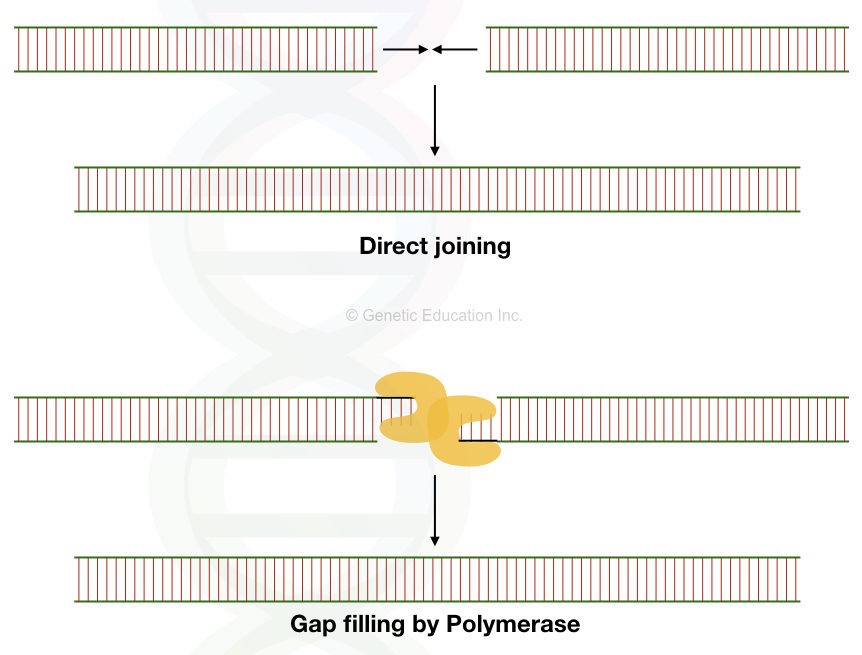 The bacterial Tn10 transposon follows the non-replicative modes of transposition. Our sleeping beauty transposons also do the same.

The cut and paste/non-replicative/ conservative transposition have significant importance in gene therapies and gene transfer. Researchers are trying to understand the genome complexity using it.

Naturally, the phenomenon helps to produce new variation as the gaps are filled with new nucleotides, which isn’t a part of the original DNA sequence. Hence, the non-replicative mechanism of transposition has a crucial function to perform in a genome- to produce new alleles.

Therefore it is believed that transposons played a significant role in the process of evolution by creating new allelic variations in the population.