“Genetics is a branch of science that involve the study of genes, DNA, chromosomes and related inherited disorders.”

It is a science of studying the inheritance of genes and genotypes.

Majorly in the genetic science, we are studying the structure of DNA, genes or chromosomes and their functions.

In addition to this, abnormalities associated with the genetic traits are studied in genetic science too.

Any alteration in a genome causes mutations, the alteration might be,

Using genetic technologies such as PCR, DNA sequencing, DNA microarray, FISH or methylation-specific assay any variation or mutation in a genome can be determined.

However, before the evolution of these state of the art technologies several techniques such as cytogenetics and souther blot like hybridization-based methods were used to do so.

In the present article, we are going to discuss some of the advanced technologies used in genetics.  We will give you a brief overview of the technologies work and what are its applications of it.

PCR is one a pioneering technology used in genetics since long. The aim of the PCR is to amplify the DNA.

Why we are using the PCR? Or what is the aim to amplify the DNA?

We need millions of copies of DNA because less DNA is available in few cells, therefore, we must need a vast amount of DNA.

A huge amount of DNA is required to perform an experiment but our extract does not contain that much amount of DNA  therefore by doing the amplification, millions of copies of DNA of our interest can be generated.

That’s why we needed an excellent machine for getting DNA amplicons- millions of amplicons. A PCR called “thermocycler” is capable of doing that.

Temperature, enzyme and additives play an important role in it.

Using the different temperature gradients the DNA of our interest can be amplified using the Taq DNA polymerase.

The Taq DNA polymerase is a type of polymerase which can even work at a higher temperature.

The DNA primer used in the PCR provides the 3’ end to the polymerase to work. Interestingly, using additives like MgCl2, DMSO or KCl like enhancers the specificity and the reactivity of the PCR amplification can be increased.

Now coming to the point.

What is the use of PCR? Why it is one of the important technologies in genetics.

The PCR amplification method is used for the screening and diagnosis of monogenic disorders like sickle cell anaemia and thalassemia.

The PCR is also used to construct DNA libraries during DNA sequencing.

It is even used in the screening of different genetic and gene mutations. 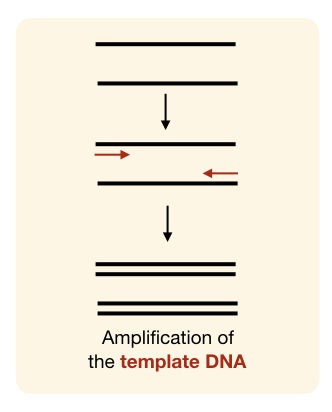 These are the reason, the amplification method using the PCR is one of the important, unmatched and unchanged technology used in genetics.

Although it has several limitations,

Many genes can not be processed at once in a PCR.

The specificity and sensitivity is also very low- required expertise to perform it well.

multigenic disorders can not be screened using conventional PCR.

Read more on PCR: The complete guide of the polymerase chain reaction.

Every new technology has several unique advantages and several critical limitations. Our PCR also called “a thermocycler” can only detect the presence or absence of the amplicons thus a gene of interest.

Only genotyping can be done using the PCR but the order of the nucleotide present in our gene of interest can not be detected.

Determining the order of nucleotides is very important because a polynucleotide chain only in a specific order can form a protein.

(If the sequence of the polynucleotide chain is altered it can not form a protein or abnormal protein is formed.)

A DNA sequencer determines the order of nucleotides in our gene of interest. However, the chemistry is different from the PCR.

Here along with the dNTPs, the ddNTPs are also used which terminates polynucleotide chain synthesis.

The ddNTPs are labelled with fluorescent dye thus when each time the chain synthesis is terminated, it emits a fluorescence which measured by the sequencer machine.

Different fluorescent peaks for different nucleotides are generated and the entire DNA sequence of our interest is orderly sequenced.

Therefore the DNA sequencing method is one of the finest and most advanced genetic technologies among all.

DNA sequencing technology is applicable for-

Yet, another revolutionary and most advanced genetic technology is the DNA microarray.

Thousands of different copy number variations, chromosomal and gene mutations are detected using the DNA microarray along with gene expression in a single array.

It is clearly indicated that DNA microarray technology is involved in copy number variation and gene expression studies.

The technology is based on the DNA hybridization principle- a modern and advanced adaptation of the southern blot hybridization.

Millions of single-stranded, short oligo probes are immobilised on the glass or solid surface on which the complementary DNA sequences are hybridized.

The hybridization signals (in the form of fluorescence) is recorded by the microarray machines which detects whether the probe is hybridized or not.

The amount of hybridization detected is directly proportional to the amount of the gene present in particular tissue or cell.

Many known mutations, genotype and gene expression can be estimated using the microarray technology.

The requirement of prior sequence information for designing the microarray is one of the major limitations of this present genetic technology.

The DNA microarray is majorly used in the genome-wide association studies.

Millions of SNPs from the entire genome can be characterised and studied using the SNP microarray.

FISH- fluorescence in situ hybridization is yet another potential technological advancement in genetics used mainly for determination of larger copy number variations from the entire chromosomes such as larger inversion, deletion, duplication or translocation.

The present technology is also based on the principle of DNA hybridization.

A known fluorescent or radiolabelled probe is used to hybridize on the metaphase chromosomes.

The probe finds its complementary DNA sequence, hybridize there and generates results shown in the figure below.

However, a fluorescent microscope and karyotyping software are required to interpret the results.

Chromosomal anomalies which can not be detected using the conventional karyotyping method can be identified easily using the FISH.

Though prior sequence information is required to design a probe.

Many different FISH probes are now commercially available. BCR-ABL like translocation can be screened using the ready to use FISH probes.

DNA methylation is one of the important phenomena in nature which regulates gene expression.

Addition of a methyl group to the DNA sequence abort the gene expression.

Or we can say a gene can not be able to form protein if a methyl group is added on it.

We will discuss more on DNA methylation and related techniques in some other article.

Besides these, other genetic technologies such as automated DNA or RNA extraction machines and DNA quantification machines make it easy for scientists to isolate and estimate DNA or RNA for downstream applications.