It gives an idea about the gene flow, gene pool and frequency of some alleles in the entire population. Disease and its prevalence can be studied on broad-spectrum through the population genetic studies.

For evolution to occur in any population, Hardy-Weinberg’s law must be violated, which means, the frequency of gene or allele must be altered. Genetic drift, gene flow and natural selection are three common phenomena in nature that drive evolution, change the frequency of alleles, resultantly.

Read more: What is a Gene?- Definition, Structure And Function.

What is gene flow?

Simply, put when genes or alleles migrate from one population to another, is known as a gene flow. For organisms to survive and reproduce, migration does occur, results in evolution and change in genetic composition.

Let’s take an example, a simple one to understand the concept. One population of drosophila have fluorescent red-eye and shorter wings- the RS population. While another population has dark black eyes and longer wings- the DL population.

When some of the drosophilas migrate from the RS to DL population, genes for the red-eye and shorter wings are also transmitted to the RS population. The RS traits may fix or new traits evolve through mating between both. Over a period of time, the entire genetic pool of the DL population may get changed. Possible alterations are:

Noteworthy, genes flow slower in smaller and immobile populations like the plants, however, they do inbreeding to acquire new traits. The risk of extinction is higher for these species. Artificial breeding and inbreeding, can be helpful to perverse and transmit them to new habitation.

What is genetic drift?

When an allelic frequency change through random event or sampling, is known as genetic drift. For example, epidemic conditions.

It’s a random event, occurs by ‘chance’ or sampling error and drives evolution too, much like the gene flow. If the effects are negative, some beneficial alleles or genes may lose, usually happens in the smaller and finite populations.

Alterations of genetic drift are driven through sudden natural disasters or artificial invasion based on which it is categorized into bottleneck effects- epidemics, flood or climate change and founder effects- separation of organisms from the main population.

Now let us understand the concept by taking an example;

Hypothesized a bottle full of two types of round marbles- green and red, filling a glass with the marbles ‘randomly’ shows how alleles migrate from one to another population.

Transmission of genes or genetic material from one population to another through migration by inbreeding and results in the gene pool alteration of the population is known as gene flow.

Whereas gene drift is defined as the migration of genes from one to another population through sampling error or ‘chance even’.

Size of the population–

The population size also matters a lot for deciding the effect of either gene flow or genetics drift.

Gene flow occurs by the process of interbreeding or inbreeding through migration with the adjacent population.

While the genetic drift occurs by the process of sudden eliminations or sampling error for a gene or allele in smaller populations.

We know that both drive evolution of new traits and genotypes. Although gene flow causes alteration through migration, on the other side, genetic drift causes alterations through either bottleneck effect or founder effect.

I already have discussed both effects in this article, somewhere.

The entire process of gene flow occurs in a large population that ensures genetic variations, new alleles may originate through the recombination.

However, there is no guarantee of genetic variability through genetic drift, as it occurs by chance or sudden- the effects are short term.

Gene flow occurs by pure geological migration of organisms of gametes that reproduce in the new population and produces a new combination of alleles. For example, pollination through the air, water, wind or other animals helps plants to migrate to new locations and new environments.

That is how new alleles evolve! 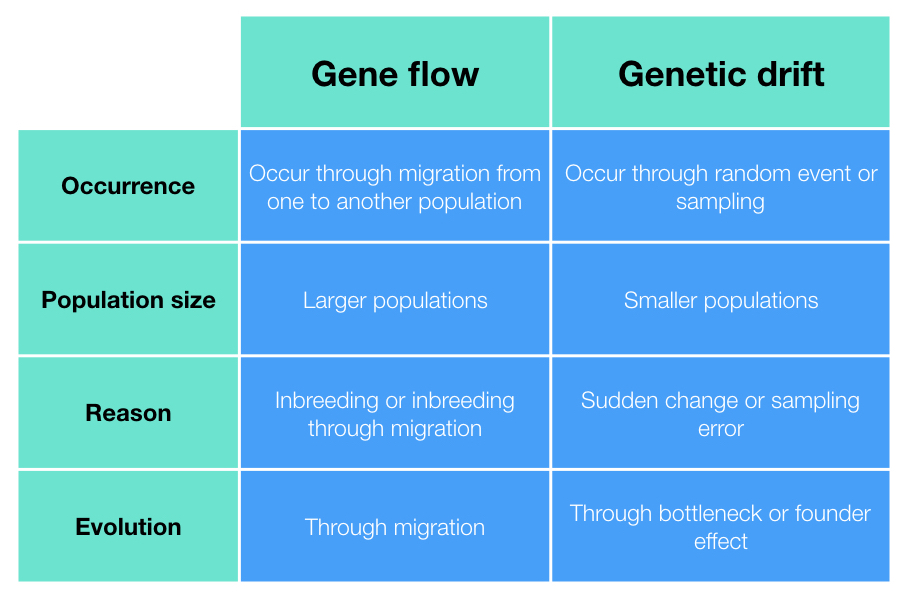 Gene flow, genetic drift and natural selection are three important phenomena applied to study evolutionary genetics such as diversity, the evolution of new traits and alleles, the difference between species and organism, lineage studies, and other evolutionary studies.

Population genetics and population genetic studies are important factors to understand the prevalence, occurrence and penetrance of any disease and that helps in curing and managing the disease.

Read more: What Is a Genotype? Definition, Frequency and Methods.