“The process of arranging, pairing, and organizing chromosomes to find chromosomal variations is known as karyotyping.”

The karyotyping is one of the most traditional and common cytogenetic techniques scientists have been using for long. As a geneticist you should learn the present technique to sharpen your expertise.

Unlike molecular techniques such as PCR, DNA sequencing, or microarray, the cytogenetic techniques are quite tedious, time-consuming, and less effective. Techniques like cell culture, staining, and banding are key elements of cytogenetics and thus are very important in performing karyotyping.

Though it is less beneficial than molecular genetic techniques, still, scientists are using karyotyping for screening and diagnosis of various genetic diseases for a long time.

The present method is powerful enough to solve the subtle mysteries of chromosomes and related abnormalities. Change in chromosome number & structure, deletions, duplications and other vast copy number variations can be screened by conventional karyotyping technique.

Cytogeneticists are using it in clinical medicines to find out trisomies like down syndrome, Patau syndrome and Edward’s syndrome.

Interestingly, the technique was originally discovered to study chromosomal constituents of the plant genome not for the human genome but over the period of time, it becomes popular to screen genetic abnormalities.

The aim of writing the present article is to let you know and give you information on the conventional karyotyping technique. Since it is not used routinely nowadays, we should have to learn those techniques to make our knowledge more in-depth.

The present article is huge and in-depth, having all the information on karyotyping and karyograms.

The word karyotyping was derived from the ancient Greek word “Karyon” which means “Kernel”, “seed” or “nucleus”. Chromosomes were first observed in plants thus the name karyotype is given to it.

In 1842, Carl Wilhelm von Nageli had observed the plant cell nucleus. He observed a thread-like structure and named it transitory cytoplasts which were actually chromosomes.

All of our DNA (except cytoplasmic DNA), are located on chromosomes. Any alteration in numbers or structure of chromosomes causes abnormalities known as genetic disease or genetic abnormality.

The aim of preparing a karyogram or karyotype is to find out any chromosomal variations.

“A procedure to study, observe and examine chromosomes aiming to find related alteration is referred to as karyotyping.”

The whole process of cell culture and harvesting was discussed in our previous article- Peripheral blood leukocyte culture. You can read it there. Here I am discussing only the overview of the entire process.

Samples such as blood, tissue, amniotic fluid, chorionic villi, or other bodily fluids can be culture. However, the blood culture is a common procedure used in cytogenetic labs to encounter various chromosomal alterations.

The sample should be cultured as soon as possible after collection. Media containing various nutrients are used to culture cells, usually RPMI-1640 complete media is used. The entire culture procedure should be performed under strict aseptic conditions to avoid contamination.

Colchicine is added to the culture for arresting cells at metaphase having distinct chromosomal patterns.

After that to separate chromosomes properly, it must swell and spread well. A hypotonic solution is used to do that.

A drop of cell suspension is dropped from some distance to separate chromosomes on a slide.

To observe chromosomes, treat the slide with either Giemsa staining followed by GTG (Giemsa-trypsin-Giemsa) banding.

Print the chromosome picture on a paper and arrange it orderly. The process of arranging chromosomes to find any changes is known as karyotype or karyogram.

The whole karyotyping method is manual, every step should be performed by a human hand, thus we need to first validate, whether we have got chromosomes or not. Giemsa staining is a fast and easy method to stain chromosomes that are often employed to verify our results.

The prepared slide is placed in a Giemsa solution of 10 to 15 minutes and observed under a 45X microscope lens. The results are looking like this, 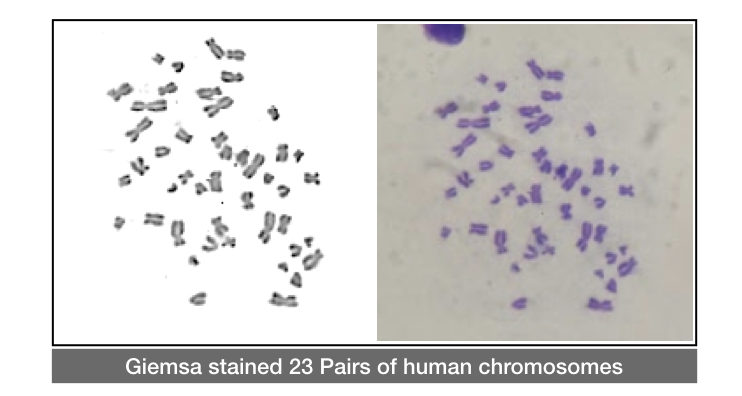 Using staining, we can’t find any abnormalities. We need to give identity to every chromosome to differentiate it well. GTG banding, Quinacrine banding, C-banding, and R-bandings are different popular techniques employed to discover various aberrations.

Moreover, GTG banding is most popular among all methods.

Q-banding: The Q-banding name is given by the use of quinacrine fluorescent dye in the banding technique. The present method is similar to the G-banding, however, here the fluorescent dye is utilized instead of a normal dye.

Here the quinacrine binds to the AT-rich heterochromatic region and emits yellow color fluorescence. Due to this distinct banding pattern, chromosomes are seen under the fluorescent microscope.

C-Banding: The C-banding is a variation of a G-banding that only stains the centromeric regions of the chromosomes thus the name is given. However, the entire process of getting the C-banding is different from conventional G-banding. We will talk about it in some other article.

R-banding: R-banding or reverse banding is the inverse method of G-banding in which instead of heterochromatin regions, the euchromatin regions appear darker and vice versa.

NOR-banding: The NOR-banding or nucleolar organizing region is a silver staining method majorly used to detect the acrocentric chromosomes.

T-banding: A less popular banding method is the T-banding which is used to study the telomeric regions of chromosomes.

What is a karyotype?

Karyotyping is a technique to grow chromosomes, while karyotype is a method or procedure to arrange it using either manual method or computational software.

“A process to pair and arrange chromosomes in order to encounter any defect is known as karyotype or karyogram.”

Once you get your GTG banding results, snap a photo through a good camera.

Print it on a paper and try to arrange each chromosome in pairs. Cut all the chromosomes separately and arrange chronologically from chromosome 1 to 22 and X and Y in last.

Stick it on a separate color paper to visualize the karyogram properly.

Observing and analyzing results of karyotype isn’t so simple as the agarose gel electrophoresis results. You need more time, expertise, and experience to arrange a karyogram and to detect the abnormality.

Every chromosome has different characteristics based on it; the categorization is done. For instance, chromosome 1 and 2 are larger metacentric.

Take a look at the chart below,

Every chromosome pair has a different centromere location and different bands of heterochromatin and euchromatin regions. We will teach you the entire process of how a karyotype is arranged in our upcoming ebook. This work is based on our practical expertise.

Nowadays various karyotyping software are available that are able to arrange every pair in a minute, computationally. The entire system of software and microscopy is semi-automated having the power to choose only the best metaphase fields and analyze it computationally.

Nonetheless, manual work is needed too for validating results. But to interpret karyotyping results a lot of experience in cytogenetics and karyotyping is required.

Though karyotyping is a traditional method, it is more effective and accurate to encounter ploidy and major deletions.

The conventional karyotyping method was considered as one of the most advanced genetic analysis methods in the past. However, the present method is time-consuming, contamination prone, and less accurate.

Nonetheless, several indications and observations are made possible only by the karyotype method. Here we have enlisted some common observations obtained by the present method.

The difference in the number of chromosomes:

One of the classic uses of the karyotype is to know the chromosome numbers, though it was discovered in plants, it is now routinely used to find numerical abnormalities in humans.

Usually, humans have 46 chromosomes, change in the basic chromosome number leads to possibly lethal and severe genetic abnormalities. For instance, the down syndrome is a cognitive and mental disorder occurring by three 21 number of chromosomes.

Using conventional G-staining or GTG-banding, the number of chromosomes can be determined.

Each chromosomal arm has hundreds of active genes or even more. Every chromosome has probably a fixed number of bands on it. By looking into each chromosome, major deletion, insertion or duplication of some chromosomal regions can be determined.

As we said, the vast experience is required to do so. Moreover, by comparing each pair of chromosomes, size variation in different chromosomes can be identified.

As I said, by comparing chromosomes from the pair, relative size variation of each chromosome can be encountered.

In humans every pair of chromosomes are different due to the centromere locations. The location of centromere makes each set unique and identifiable.

Using banding techniques like the NOR-banding or C- banding, the centromeric location can be determined.

Also, inversion and translocations including the centromere can be identified by the combination of various banding methods.

Studying the satellite or telomere regions:

The satellite regions are smaller bodies present at the end of chromosomes known as the telomeres. These regions are repetitive DNAs but help in maintaining the replication.

Using the telomeric banding techniques, the present regions can be studied well to identify any abnormalities in it.

Besides these, in plants, the method karyotyping is used to find out aneuploidies and aneuploidies.

A karyotype test is one kind of genetic testing method employed to detect various chromosomal anomalies. As we said, it is a cell culture method in which blood, bone marrow, biopsy, and other tissues can be cultured.

The process and steps of karyotyping are explained above (click here to jump back).

Notably, the test is mainly used in the prenatal screening of chromosomal abnormalities like Down syndrome, Patau syndrome, and Edward’s syndrome. For that amniotic fluid, the placenta or chorionic villi sample is taken for culture. The present test is also used in sex-determination as well.

The conventional karyotyping method is straightforward and simple, using only a single dye or stain, scientists do analysis. But what if we can color every chromosome pair differently? With different dye? It makes observation simpler and easier, right!

Spectral karyotyping is a sophisticated and most recent optimization of the traditional methods in which every chromosomal pair is colored with different dyes.

The present method is widely used to detect the marker chromosome, translocations and cryptic chromosomal changes. It can detect 5-10Mb genetic abnormalities with balanced & unbalanced translocations, ploidies, deletions, and other variables that are generally not detected in conventional karyotyping.

Notwithstanding, it can’t identify variations of less than 5Mb. Also, fluorescent microscopy systems are needed to perform SKY- spectral karyotyping.

The karyotyping test is so traditional but recent automation made it more robust and accurate to detect various anomalies. Nowadays, a powerful microscope and computer systems are available which are quick, robust, and extremely accurate.

Nonetheless, expert supervision is required before preparing the final reports.