All the information present in a cell, an organism possesses to survive is known as genetic information. It is important because it stores, processes and transmits biological data from generation to generation.

‘Genetics’- the word is known to us and we know it is important, but people,  especially, who are from non-genetic background don’t know why it is so. The study of DNA, genes, chromosomes and genome is referred to as genetics.

Genetic code possesses the biological information in a long biopolymer which is located on the specialized structure known as chromosomes.

In a cell, the genetic information is located in the nucleus, the nuclear membrane protects it from degradation. The beauty of it is that it even transmits from one cell to another, from one organism to another, consequently.

In the present piece of content, we will discuss the importance of genetic information. 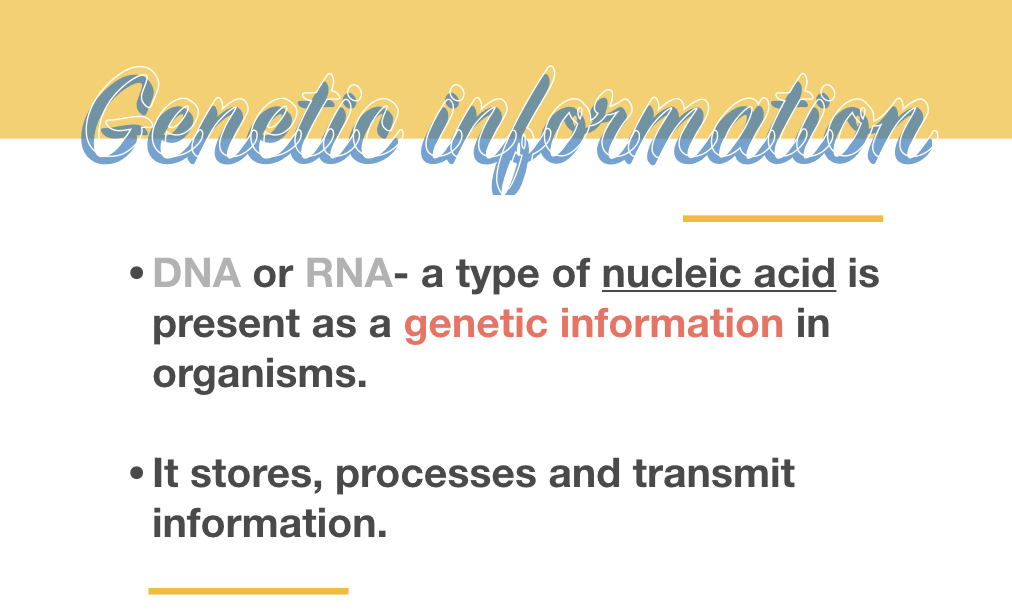 What is genetic information?

The information about color, height, weight, eyesight, metabolism, reproduction and other activity related to an organism is present in the form of genetic information.

Genetic information is a collection of data that helps the organism to survive and inherit phenotype to generations. The cell’s nucleus carries a special type of acid known as a nucleic acid that stores the genetic information.

Commonly it is of two types either DNA or RNA- acronym as deoxyribose nucleic acid or ribonucleic acid. In almost every organism the DNA is the memory unit that stores the information.

It’s a code- a genetic code much like the computer code (the binary language) that has the capacity to store infinite information in it. Before going ahead we need to understand what exactly is stored as genetic information.

What is genetic information stored?

As we said, the genetic information- a biological hard-drive stored every possible massage, information and data of life, in fact, of all life in one unit- the DNA.

Reproduction- how an organism reproduces and forms new life

Variation- what type of phenotypes will occur in a new life

Growth- how much will an organism grow

Synthesis- what type of and in which amount biomolecules will synthesis

Cell death- how a cell will die?

Phenotypes- like eye color, hair color, length of limbs, length, weight, race, color and gender of an organism all these things are regulated by the information present in the DNA- the genetic information. And therefore we know it as a biological database of life.

Immediately one may wonder, what exactly the genetic information is made off? The answer is here!

What is the genetic information made off?

The genome information is a code- a genetic code of triplets. The triplet is made up of a combination of four different nucleotides, A, T, G and C. The long chain of nucleotides is known as a polynucleotide chain that manufactures the DNA and genes and itself is made of sugar, phosphate and a nitrogenous base.

Read more on Nucleotide vs nucleosides.

The combination of the triplet monomer of nucleotides decides which amino acid to form! Which ultimately manufactures the protein. For example, the triplet AUG forms the amino acid methionine.

One point I forgot to mention, the chain of DNA- a gene translates into the mRNA in which the thymine will be replaced by the uracil base.

In some viruses, instead of DNA, the RNA is present as genetic material, they directly translate protein.

Where is the genetic information present? Or

Where is the genetic information in a cell stored?

The genetic information present in a central processing unit of a cell- the nucleus. Although to make a protein, transcription converts DNA into mRNA and it moves out of a cell to the cytoplasm.

At the cytoplasm, it makes protein through translation.

We can even store genetic information artificially using a computer program. The triplet codons are converted into the binary computational language to process the data, although the data is huge, we need a supercomputer to process.

You can read this article to learn more: DNA digital data storage.

One of the important characteristics of genetic material is that it flows from one to another generation. This means the information of what phenotypes to make in progenies flow off by genotypes.

Two copies of genotype one from father and one from mother inherited to the progenies and make the entire diploid genome of an organism.

Through the process of recombination, various combinations of genotypes or alleles are formed and phenotypes change. Importantly the environment also has a significant effect on deciding the trait.

The flow of genetic information is shown in the figure below,

Why is genetic information important?

Now coming to the important question of our present article, why is it important?

So far we learn that genetic information carried out three important functions: storing, processing and transmitting the information.

I am explaining to you how everything happens;

Two haploid sets of genomes come through germ cells and manufacture the embryo from where different bodily cells form. After that the genome becomes diploid.

By taking signals from the environment and what phenotype the organism needs to survive, the exact phenotypes and traits it forms. Sometimes, if any additional change is required, it happens in the DNA- the process of evolution.

The cell processes the genetic information as per the requirement and leads to the evolution of new traits if needed. That is how the processing of information occurs.

In any harsh conditions, the nuclear membrane protects the information to degrade and maintain the integrity of data- the genetic code. Which means it protects every bit of genetic code. And that is how the storage of information occurs.

We already have discussed how it is inherited or transmitted, so no need to discuss it here.

Can genetic information be edited?

One of the important functions of a cell is to maintain the integrity of genetic information or genetic material, which means, to protect it from unwanted change.

Unwanted change in genetic information causes a mutation that might be harmful and occurs commonly in a genome. For instance, a single nucleotide change in the HBB gene causes serious anemia.

But we can edit it to repair, replace or manipulate genetic code as per our need.

The technique is known as gene editing, can cure genetic disorders. A well-known tool is CRISPR- cas9, an effective one and cheap, using which various mutations and disorders can be repaired, even the inherited one too!

A genome can be edited, in a controlled manner! You can read this article on the present technique to learn more:

Using this information various data can be obtained and used in population genetic screening. For instance, we can get information regarding which population or people are at the risk of Alzheimer’s, in which people are not at risk of breast cancer and who are susceptible to sickle cell trait. Nonetheless, it is very important to protect the information from genetic hackers who can misuse the data and can manipulate it too.

1 thought on “Why is Genetic Information so Important? ”